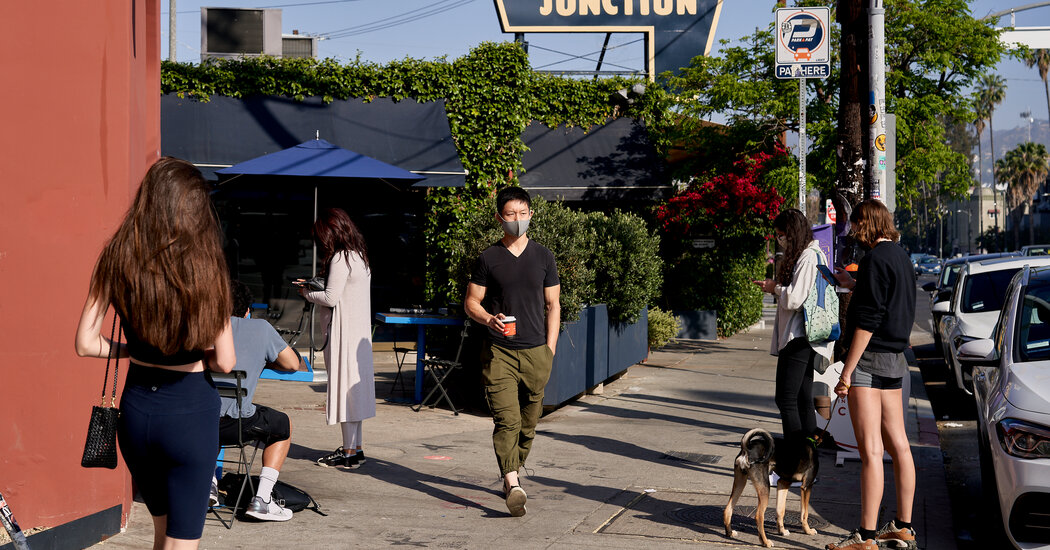 In parts of New York City, mask wearing has been ubiquitous throughout the pandemic. But even there, the scene is shifting amid C.D.C. recommendations that fully vaccinated Americans no longer need to wear a mask outdoors when alone or in small groups; on recent sunny days, large crowds have flocked to Central Park, and more and more, people are going maskless along sidewalks.

New infections in New York fell by two-thirds in the past month, dipping to around 1,200 new cases a day. Citywide, the number of people hospitalized with the virus recently dropped to below 100.

With 40 percent of adult New Yorkers fully vaccinated, the city is barreling toward a full reopening. Starting May 19, restaurants, stores, theaters and museums will be allowed to return to near full capacity for the first time since the pandemic began, and tickets for fall Broadway shows will go on sale this week.

Dr. John Swartzberg, an infectious-disease specialist and clinical professor emeritus at the University of California, Berkeley’s School of Public Health, said he was optimistic in the short term, with vaccinations continuing and warm weather luring Americans outdoors.

But he said that he was worried about the virus’s current path of devastation through India and Latin America, and that he wondered if the United States was opening up too quickly, with 50,000 new cases still reported each day. (One year ago, the daily cases were half that number.)

“There is a randomness to the way this virus has spread,” he said. “It flares in one place. It doesn’t progress smoothly through the entire country and entire world. The randomness is what makes me feel insecure.”

In one example of that, Washington State has seen increasing case numbers and hospitalizations in recent weeks, despite rising vaccination numbers and restrictions that have left restaurants and other businesses operating at 50 percent capacity in much of the state.

It’s a property that offers a unique open floor plan—plus a hot tub with a view.“It was a Methodist church located in a historic little area of St. … END_OF_DOCUMENT_TOKEN_TO_BE_REPLACED