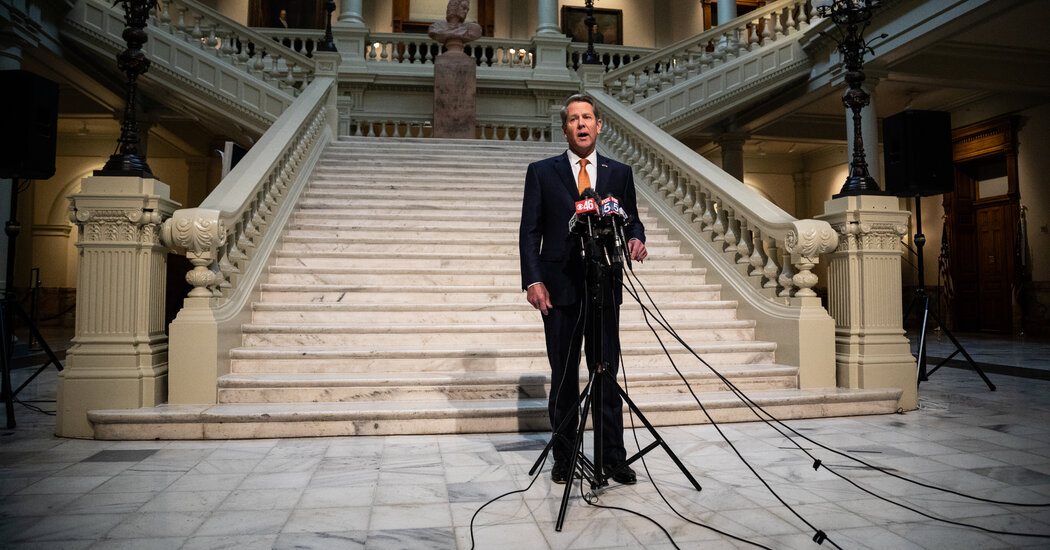 Republican Party officials in two deeply conservative counties voted to censure Gov. Brian Kemp and two other top party leaders in recent days, a sign that the Georgia governor continues to face grass-roots opposition from loyalists to former President Donald J. Trump, and the possibility of a primary challenge next year.

In Whitfield county, in the northwest corner of the state, Republican officials unanimously voted to condemn Mr. Kemp, saying he “did nothing” to help Mr. Trump after the November election.

“Because of Kemp’s betrayal of President Trump and his high unpopularity with the Trump GOP base, Kemp could end up costing the GOP the governor’s mansion because many Trump supporters have pledged not to vote for Kemp under any circumstances,” reads the resolution, which was adopted by acclimation.

A similar resolution was adopted in Murray County, also in northern Georgia, by a nearly unanimous vote. It was opposed by only three of the dozens of members in attendance. Both counties also voted to censure Lt. Gov. Geoff Duncan and Secretary of State Brad Raffensperger.

saw a path to redemption within the party in the controversial election bill that the legislature passed ast month, which the governor has forcefully defended in dozens of public appearances even as the new law adds new limits to the right to vote in Georgia.

Other resolutions adopted by the counties supported a bill passed in the Republican-controlled Statehouse stripping Delta of a $35 million jet fuel tax break and urged Georgians to boycott Major League Baseball and “woke companies” that criticized the election law.

“The Republican grassroots are angry,” said Debbie Dooley, a conservative activist, who helped distribute drafts of the resolutions and encouraged Trump supporters to attend the local meetings. “These resolutions will let Gov. Kemp, Lt. Gov. Duncan and Secretary of State Raffensperger know we’re going to work against them in the Republican primary next year.”

BERLIN — Dr. Peter Weitkamp placed an ad in eBay’s classifieds last week, offering appointments for an AstraZeneca vaccine — “free/to give away” — to … END_OF_DOCUMENT_TOKEN_TO_BE_REPLACED

Secretary of State Antony J. Blinken, meeting with counterparts from both China and Russia on Friday, said that the United States would “push back … END_OF_DOCUMENT_TOKEN_TO_BE_REPLACED