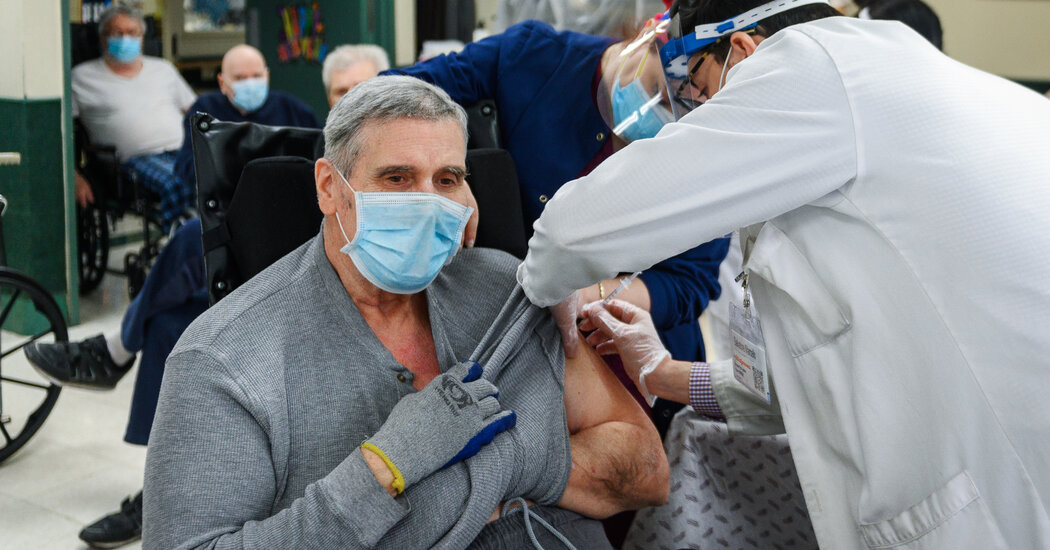 WASHINGTON — With a stockpile of at least 100 million doses at the ready, Biden administration officials are developing a plan to start offering coronavirus booster shots to some Americans as early as this fall even as researchers continue to hotly debate whether extra shots are needed, according to people familiar with the effort.

The first boosters are likely to go to nursing home residents and health care workers, followed by other older people who were near the front of the line when vaccinations began late last year. Officials envision giving people the same vaccine they originally received. They have discussed starting the effort in October but have not settled on a timetable.

While many outside experts argue there is no proof yet that the vaccines’ protection against severe disease and hospitalization is waning in the United States, administration officials say they cannot afford to put off figuring out the logistics of providing boosters to millions of people until that tipping point is reached. The spotty nature of the nation’s disease-reporting network makes the question of timing even trickier.

The effort comes as yet another wave of the coronavirus grips the nation, reversing much of the progress the administration had made. Hospitals in states like Texas, Louisiana and Mississippi are again swamped with patients, the vast majority of them unvaccinated.

the European Union said this month that there was not yet enough data to justify boosters. Germany and France nevertheless have announced plans to start giving booster shots to the older adults and other vulnerable populations next month.

Israel, which is already administering booster shots to people over 60, announced on Thursday that it would offer them to those over 50 as well. Britain so far is holding off, but already has a detailed plan for distributing boosters to people 50 and over.

the C.D.C. recommended them. The authorities decided those individuals, who make up fewer than 3 percent of Americans, merited extra shots because many fail to respond to the standard dosage.

Administration officials continued to insist this week that boosters remained unnecessary for the general population for now. Determining at what point that changes is difficult because administration experts lack up-to-date data on so-called breakthrough infections in vaccinated people, including their prevalence, when such people were vaccinated and which vaccine they received.

Instead, officials are analyzing a complex array of information from a range of sources, including from the vaccine manufacturers Moderna and Pfizer-BioNTech, which has an agreement with the Israeli government to review its data. Other sources of information include a variety of foreign governments, and the Centers for Disease Control and Prevention, which collects data from states and hospitals. All of that data is subject to interpretation and can be marshaled to support arguments for or against boosters.

“It’s somewhat chaotic, with everybody doing their own thing,” said Dr. Jesse L. Goodman, a former chief scientist at the F.D.A. and now a medical professor at Georgetown University. “We need a system to monitor real-world vaccine effectiveness in near-real-world time.”

He added: “When something comes up like the Pfizer report on Israel, we should be able to say, ‘Are we seeing that here?’ I’m very distressed that we’re not there yet.”

Of that number — 8,054 as of Aug. 9 — three-fourths were 65 or older. But the agency says the true total is likely larger because the data relies on voluntary reporting from the states.

Understand the State of Vaccine and Mask Mandates in the U.S.

Data from Israel has prompted growing concern. With only 8.7 million residents, Israel has outpaced the United States in vaccinating its population. It has relied almost exclusively on the Pfizer-BioNTech vaccine and has a nationalized health care system that allows it to systematically track patients.

Researchers at Israel’s Ministry of Health have said that the Pfizer vaccine’s effectiveness in preventing infection fell from 95 percent early in the year to 39 percent from late June to mid-July. The vaccine’s overall efficacy against severe disease remained high, though, at 91.4 percent.

More recent Israeli data suggests continued erosion. One person who has reviewed it said it showed that the Pfizer vaccine’s efficacy against severe disease had dropped significantly for those 65 and older who got their first shots in January or February.

Moderna officials reported in an earnings call last week that six months after a person received their second dose, the strength of their antibodies against variants was found to have waned substantially. But many scientists say that waning antibodies are expected and should not be viewed as a sign that a vaccine is working less well.

In general, U.S. scientists are frustrated with how bits and pieces of often conflicting data are dribbling out in company news releases and studies that have not been peer-reviewed or published in scientific journals.

The C.D.C. has said it is following breakthrough infections in specific population segments, including health care workers, emergency medical workers and nursing home residents. But the reports posted on its website rely on data from months ago, before the Delta variant became dominant.

“Everyone is confused because there is not a lot of published data,” Dr. Peter J. Hotez, a vaccine expert with the Baylor College of Medicine in Houston, said. “The question is how vulnerable are we, and the numbers are a bit all over the map.”

While some federal officials have argued that any booster should be tailored to the Delta variant, the administration is expected to use the same vaccines that have already been manufactured and that studies indicate work well against the Delta variant.

Mr. Bancel, Moderna’s chief executive, said his company would not have a vaccine targeted specifically to the Delta variant until the end of the year. Pfizer is on a similar track.

Both companies are expected to apply soon to the F.D.A. for authorization of a third shot of their existing two-dose vaccines. Moderna is studying the effectiveness of both a full dose and half dose as a booster.

N.I.H. researchers are conducting trials to determine if giving people a booster shot of a different vaccine from the one they originally received provides better protection. While a mix-and-match effort could be hard to organize, officials want to see that data.

“It’s a little compressed from what you would normally want,” said Dr. John Beigel, who is leading the study. “But we want to make sure we have data to inform decisions this fall.”

Danny DeVito and Rhea Perlman have listed their cozy two-bedroom Los Angeles retreat for  $1.55 million.DeVito, who stars in "It's Always … END_OF_DOCUMENT_TOKEN_TO_BE_REPLACED