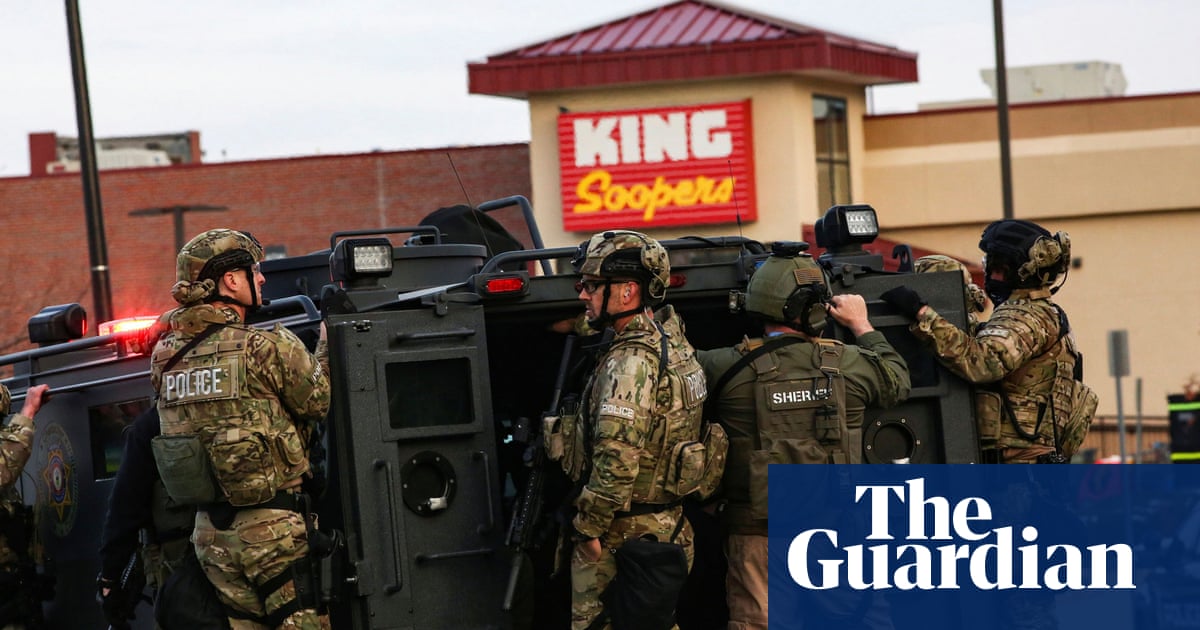 After recording a year with the lowest level of public mass shootings in more than a decade, the US suffered its second such incident in less than a week on Monday night with a shooting at a Colorado grocery store that killed 10, including one police officer.

Gun safety advocates including former president Barack Obama called for immediate action by Congress to address the resurgent national epidemic as the country emerges from a year of lockdowns and social distancing sparked by the coronavirus pandemics.

In remarks at the White House, Joe Biden called for a new ban on assault weapons and high-capacity magazines and said the Senate “should immediately pass” legislation to close loopholes in the background checks system for the purchase of guns.

The Republican minority in the Senate is highly likely to block any action on gun control. Nonetheless, senators on the Democratic side echoed Biden’s call to action.

“This is the moment to make our stand. NOW,” tweeted Senator Chris Murphy from Connecticut, where a shooter killed 26 people at an elementary school in 2012.

A male suspect was arrested at the scene, a King Soopers grocery store in Boulder, Colorado. He was named on Tuesday, as were the 10 victims.

“This is a tragedy and a nightmare for Boulder county, and in response, we have cooperation and assistance from local, state and federal authorities,” said the Boulder county district attorney, Michael Dougherty.

The Colorado attack brought the week’s death toll from mass public shootings to 18, after a gunman killed eight people at three Atlanta-area spas last Tuesday. Six of those victims were women of Asian descent, and that attack produced a national demand for reckoning with discrimination and violence directed at Asian Americans.

While racist scapegoating by Donald Trump and others sparked thousands of attacks against Asian Americans during America’s pandemic year, 2020 was an unusually quiet one for mass public shootings, according to a database maintained by the Associated Press, USA Today and Northeastern University.

There were 10 such shootings in 2018 and nine in 2019, according to the database, which tracks public incidents in which at least four people died, not including the shooter.

The US suffered only two such incidents in 2020 – both at the start of the year, before the spread of the coronavirus led to local economic and school shutdowns and related restrictions.

Gun sales surged during the pandemic, leading to fears of a return of mass gun violence after coronavirus restrictions eased. Those fears appear to have been fulfilled already.

“We have had a horrific year as a country, as a world,” Colorado’s state senate majority leader, Stephen Fenberg, a Democrat, told MSNBC. “It had finally started to feel like things are getting back to ‘normal’. And, unfortunately, we are reminded that that includes mass shootings.”

The police officer killed in the Colorado store attack, Eric Talley, 51, the father of seven children, was the first to respond to reports of shots fired at the store, authorities said.

The attack came just days after a judge blocked Boulder from enforcing a two-year-old ban on assault weapons and large-capacity magazines in the city.

“The court has determined that only Colorado state (or federal) law can prohibit the possession, sale and transfer of assault weapons and large-capacity magazines,” wrote the county judge, Andrew Hartman, according to the Denver Post.

While no state is untouched by mass shootings, Colorado has had an especially difficult history of such incidents, beginning with an attack on students at a high school in Columbine in 1999 that killed 13. In Aurora in 2012, a gunman fired at a crowd watching a Batman movie, killing 12 and wounding 58.

As previously scheduled, the Senate judiciary committee held a hearing Tuesday on “constitutional and common sense steps to reduce gun violence”. Gun safety legislation has failed to gain traction in Congress despite wide public agreement about certain safeguards such as universal background checks.

“To save lives and end these senseless killings, we need more than thoughts and prayers – we need federal action on gun safety from the Senate, and we need it now,” said John Feinblatt, president of Everytown for Gun Safety. “That work begins with this hearing, and we cannot rest until we pass background checks into law.”

Murphy, who does not sit on that committee but who mounted a nearly 15-hour filibuster on the Senate floor in 2016 to advance gun safety legislation after 49 people died in a mass shooting at a gay nightclub in Florida, called on colleagues to finally address gun violence.

“No more Newtowns. No more Parklands. No more Boulders,” he tweeted. “Now – we make our stand.”

For seven weeks in a row, mortgage rates steadily moved higher. Then they started pulling back last week. But despite this week's decline, experts … END_OF_DOCUMENT_TOKEN_TO_BE_REPLACED