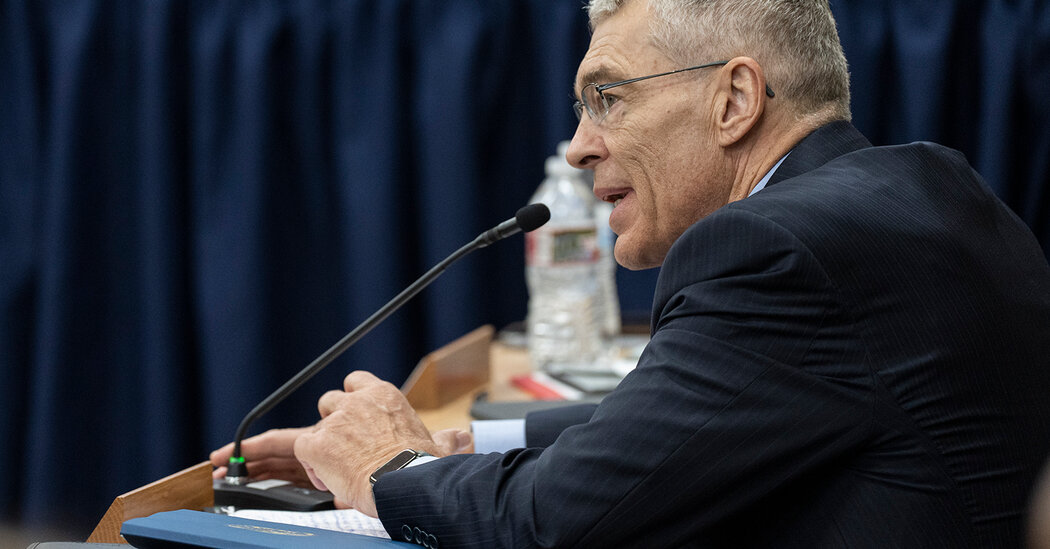 HOUSTON — At a somber and occasionally emotional oversight hearing, the director of the Texas state police faced pressure on Thursday to resign over his agency’s role in the delayed police response to the Uvalde school shooting and its handling of the subsequent investigation.

Relatives of two of the children killed during the May 24 massacre at Robb Elementary School directly addressed the state police director, Steven McCraw, from a lectern that included a box of tissues, accusing him of creating more pain and hurt in Uvalde and urging him to step down.

“You, sir, have told lies,” said Brett Cross, who raised his nephew, Uziyah Garcia, 10, like a son until the boy was killed in a classroom at the school. “You’re not in control of your officers, nor are you the leader this great state deserves at the helm of what was once known as one of the best law enforcement agencies.”

Mr. McCraw, in his remarks, said that he would resign if it were shown that his agency, the Department of Public Safety, had “as an institution” failed in its handling of the shooting, something he said had not yet happened. (He had previously promised to step down if there was “any culpability” in his agency.)

Calls for Mr. McCraw’s resignation on Thursday came from both inside the hearing room where the Public Safety Commission met in Austin, and from politicians outside.

fired by the school district over the summer. The district later suspended the rest of the school Police Department amid protests by Mr. Cross and others, and after it was revealed that a new campus security officer hired by the district was a former state police officer who was under investigation for her actions during the shooting. The police lieutenant who was the city of Uvalde’s acting chief during the shooting was put on administrative leave. The school superintendent also announced his intention to resign.

The Department of Public Safety has said that 91 of its officers responded to the elementary school on May 24, part of a response that included hundreds of local, state and federal officers. Sergeant Maldonado arrived with the first contingent of officers from the city and school Police Departments. Body camera footage released so far has shown him hanging back at a doorway, not entering the building.

Other footage from later in the response showed Ranger Kindell inside the school conferring with Border Patrol agents who would later lead the team that confronted the gunman. Even after hearing additional gunfire inside the classrooms, the team did not go in for nearly 30 more minutes.

Mr. McCraw said on Thursday that the Texas Rangers, a division of his agency that has been leading the state’s investigation into the shooting, would be finishing its work before the end of the year and sending the results to the local district attorney. He suggested that officers could face charges for their roles in the case, depending on what the investigation showed.

“The district attorney is going to review every officer in that hallway for criminal culpability,” he said.

He said the ultimate decision on charges could stretch longer than two months in part because the autopsies of the victims had not been completed. “That’s critical to this thing,” Mr. McCraw said. “The question is how many kids did die in that room, or teachers died, because they missed that magic hour,” when medical intervention could have saved them, he said.

After speaking for about 13 minutes, Mr. McCraw invited the victims’ relatives and others who had already spoken to respond to him.

Mr. Cross jumped up. “You said that you would resign if there was any culpability,” he said.

“If D.P.S. as an institution failed the city of Uvalde, I would be glad to,” Mr. McCraw said.

“Unfortunately, it doesn’t seem like you’re going to do that because you keep talking in circles,” Mr. Cross said. “I lost my damn son. Your anger is not going to match mine, man.”

He then pressed him further.

Mr. Gutierrez then returned to the microphone to directly address Mr. McCraw. Referring to videos from the shooting that he was able to review as a legislator, Mr. Gutierrez said that a critical moment came when a tactical officer from Border Patrol arrived and said he had a Border Patrol Tactical Unit that was headed toward Uvalde, 45 minutes away.

“That turned into this: We’re waiting on BORTAC. We’re waiting for a federal agency that doesn’t have jurisdiction to come in and do our jobs,” Mr. Gutierrez said. “That’s what happened on that day and you know it.”

“I don’t disagree with that characterization,” Mr. McCraw said. “And I’ll tell you this: It was an abject failure.”

AUSTIN, Texas--(BUSINESS WIRE)--As the first multifamily management company to be recognized in the Public Relations and Marketing Excellence Awards, … END_OF_DOCUMENT_TOKEN_TO_BE_REPLACED

There have been whispers of cooling housing and rental prices in the San Francisco Bay Area, but that hasn't yet translated into practical, noticeable … END_OF_DOCUMENT_TOKEN_TO_BE_REPLACED

Cars pass in Independence Square at twilight in Kyiv, Ukraine, Monday, Oct. 31, 2022. Rolling ... [+] blackouts are increasing across Ukraine as the … END_OF_DOCUMENT_TOKEN_TO_BE_REPLACED