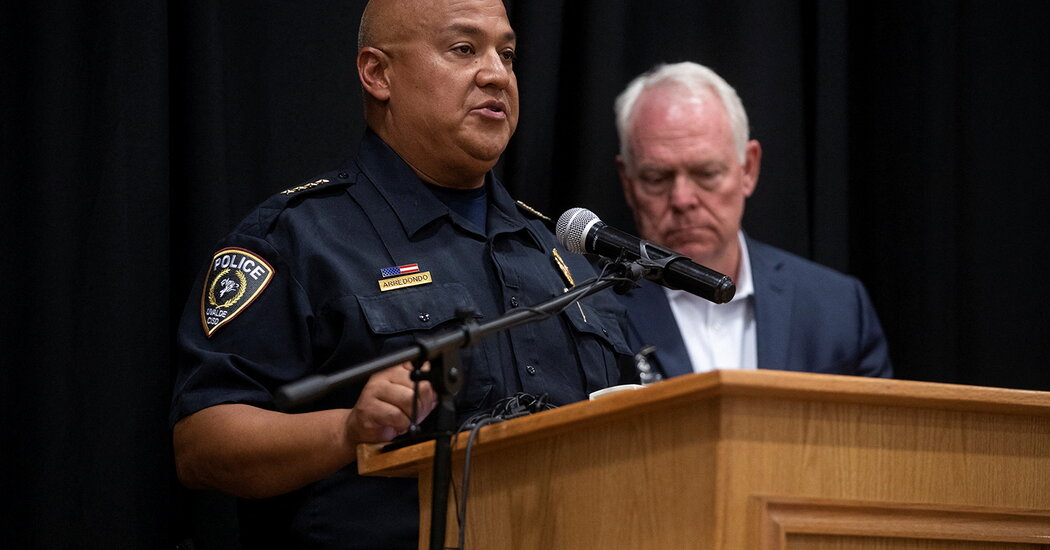 HOUSTON — The chief of the school district police force in Uvalde, Texas, was placed on administrative leave after the state’s top police official faulted him for delaying the confrontation with a gunman at Robb Elementary School last month, the school district said on Wednesday.

Chief Pete Arredondo was among the first officers to arrive at the school after the shooting began on May 24. According to the director of the state police, Steven McCraw, he was also the incident commander for the response, which Mr. McCraw called an “abject failure.”

Though officers from several agencies entered the school minutes after a gunman opened fire in two connected classrooms, they waited more than an hour before confronting and killing him. Nineteen students and two teachers were killed in the attack.

in a news release that he had planned to “wait until the investigation was complete before making personnel decisions.” But he said he ultimately made the decision to put the chief on leave because “of the lack of clarity that remains and the unknown timing of when I will receive the results.”

in an interview this month that he did not believe he was in charge of the response at Robb Elementary School. The law firm representing him declined further comment on Wednesday.

A day before the school district’s decision, Chief Arredondo was denied a leave of absence by the Uvalde City Council, to which he was elected shortly before the shooting. He has not appeared at public meetings since the attack and without the leave could be forced to relinquish his Council seat after three missed meetings.

during the meeting, wearing a shirt featuring her late granddaughter. “He failed us. Do not make the same mistake he made and fail us too.”

As the Council signaled that it would deny Chief Arredondo’s leave of absence, many in the crowd cheered and applauded.

KOROPY, Ukraine — Four men tugged at long strips of fabric to lift a coffin out of the gaping hole in the backyard of a small house. They flung the … END_OF_DOCUMENT_TOKEN_TO_BE_REPLACED

The lawsuits argue that state constitutions offer more protection for abortion than the federal constitution, either by quirk of state tradition or … END_OF_DOCUMENT_TOKEN_TO_BE_REPLACED