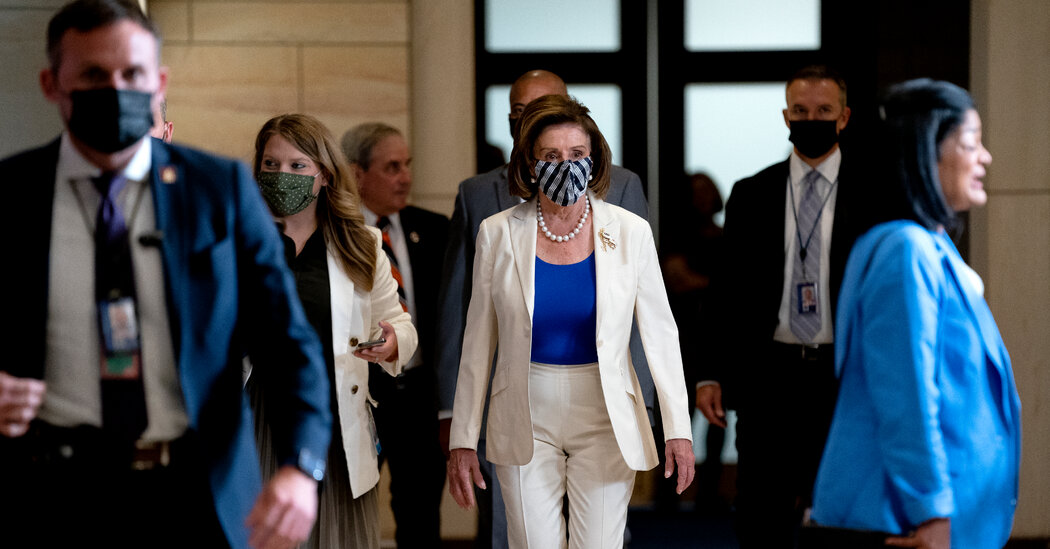 Drew Hammill, a spokesman for Ms. Pelosi, said on Tuesday that a member of her staff, a senior spokesperson who had been “fully vaccinated,” had tested positive on Monday. He said the aide had had no contact with the speaker since being exposed to the virus.

At a news conference on Tuesday, Jen Psaki, the White House press secretary, said a fully vaccinated White House official had also tested positive for the virus “off campus,” was experiencing “mild symptoms,” and remained away from the complex awaiting a test to confirm the diagnosis.

She would not divulge whether the aide had been with the Texas lawmakers, who made a high-profile trip to Washington in an effort to block the adoption of a restrictive election law. Axios reported that both the Pelosi aide and the White House aide had attended a reception with the Texans.

As a result of the positive test, Mr. Hammill said that Ms. Pelosi’s press office was working remotely, with the exception of those aides who had tested negative or did not come into contact with the infected spokesperson.

The news of the infections rattled some on Capitol Hill, where lawmakers and professional staff have been moving toward more normal operations for months now. Representative Steny H. Hoyer, Democrat of Maryland and the majority leader, said that rising coronavirus cases across the country could force the House to reconsider its relaxation of mask requirements and other pandemic-era measures like the use of proxy voting.

“We are going to have to decide, given the upswing in every state, whether or not prudence demands we go back to wearing a mask,” Mr. Hoyer told reporters on Tuesday.

voting law by the Republican-controlled legislature. Photographs showed them maskless while traveling to Washington. Since then, six lawmakers on the trip have tested positive for the coronavirus.

You were seeing double this week: A spectacular $54 million compound featuring two equally luxurious mansions separated by a private lake in Southwest … END_OF_DOCUMENT_TOKEN_TO_BE_REPLACED

Taylor Heinicke #4 of the Washington Football Team celebrates after defeating the Seattle Seahawks at FedExField on November 29, 2021 in Landover, … END_OF_DOCUMENT_TOKEN_TO_BE_REPLACED

Members of the Ukrainian Police force, Larisa, 31, and Roman, 30, get married at a wedding hall at an expo center in Kyiv, Ukraine, on … END_OF_DOCUMENT_TOKEN_TO_BE_REPLACED