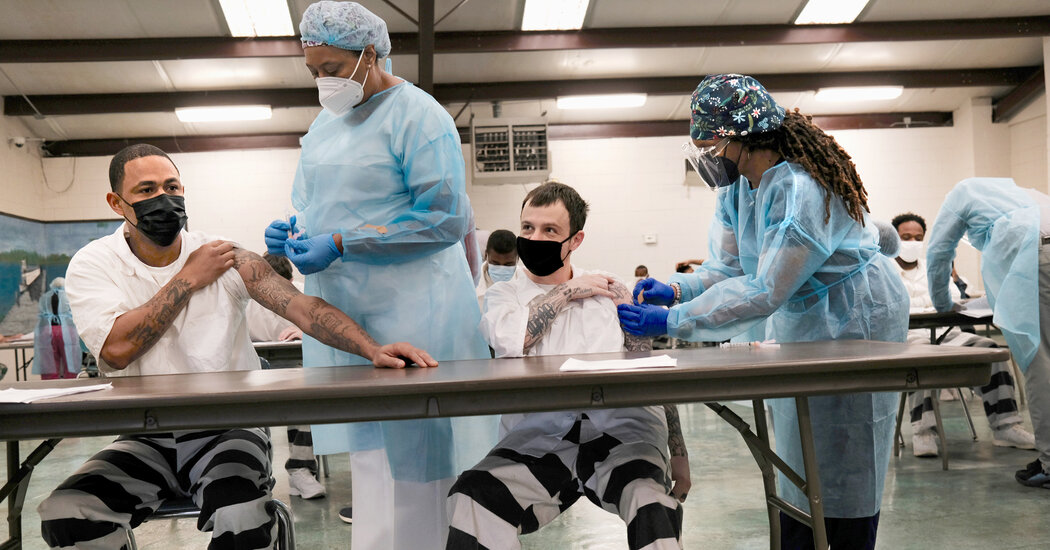 Vaccinations in many American prisons, jails and detention centers are lagging far behind the United States as a whole, prompting public health officials to worry that these settings will remain fertile ground for frequent, fast-spreading coronavirus outbreaks for a long time to come.

Nationally, more than 60 percent of people ages 18 or older have received at least one dose of vaccine so far. But only about 40 percent of federal prison inmates, and half of those in the largest state prison systems, have done so. And in immigration detention centers, the figure is just 20 percent.

With the overall pace of vaccinations slowing in the United States — down to about 1.88 million doses a day on average, according to federal data — the Biden administration has been stepping up efforts to win over the hesitant and reach people in underserved and vulnerable communities and those facing access issues.

Over the course of the pandemic, prison inmates have been more than three times as likely as other Americans to become infected with the virus, according to a New York Times database. The virus has killed prisoners at higher rates than the general population, the data shows, and at least 2,700 have died in custody.

account for a much larger share of inmates (33 percent) than they do of the overall population (13 percent), and the pandemic has disproportionally hit Black Americans in general.

Black and Hispanic people across the United States have received a disproportionately smaller share of vaccinations to date, according to a New York Times analysis of state-reported race and ethnicity information, though some progress has been made.

High vaccination rates in another kind of high-risk setting, nursing homes, have greatly reduced the spread of the virus there. But unlike nursing home residents, prisoners were generally not a high priority for early vaccination. By April 19, the 50 states, the District of Columbia and Puerto Rico had expanded eligibility to all adults. Still, refusal rates in prisons have been high.

Many inmates say they mistrust both the vaccine and the prison authorities who try to persuade them to get inoculated. Beyond that, some prison vaccination efforts have been hampered by mistakes.

Prison officials in some states have tried offering inmates incentives to be vaccinated, including extra food — with varying degrees of success.

told the Senate Judiciary Committee in April that each of the system’s 126,000 inmates would have access to the vaccine by mid-May. But as of Thursday morning, only 40 percent of inmates and 50 percent of employees had been vaccinated.

Emily Wang, a professor at the Yale School of Medicine who studies prison health care, said it is often difficult to gauge prison vaccination rates with certainty because inmates are often transferred, and many state prison systems do not disclose vaccine rates at all.

“If the best estimates are 50 percent, I’ll bet it’s lower,” Dr. Wang said. “And we’re not close to the mark. There’s no question in my mind, this hasn’t gone well.”

AUSTIN, Texas--(BUSINESS WIRE)--As the first multifamily management company to be recognized in the Public Relations and Marketing Excellence Awards, … END_OF_DOCUMENT_TOKEN_TO_BE_REPLACED

There have been whispers of cooling housing and rental prices in the San Francisco Bay Area, but that hasn't yet translated into practical, noticeable … END_OF_DOCUMENT_TOKEN_TO_BE_REPLACED

Cars pass in Independence Square at twilight in Kyiv, Ukraine, Monday, Oct. 31, 2022. Rolling ... [+] blackouts are increasing across Ukraine as the … END_OF_DOCUMENT_TOKEN_TO_BE_REPLACED