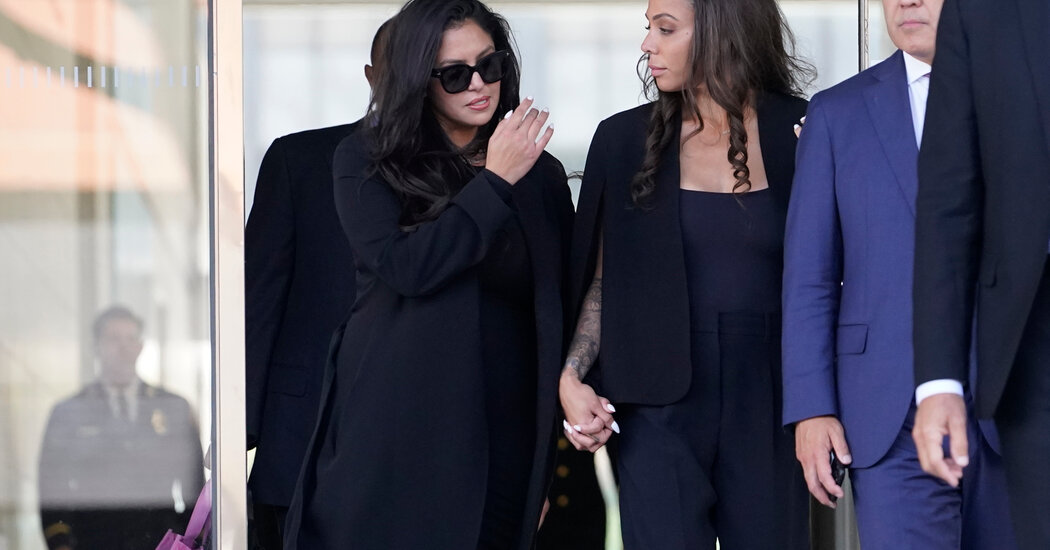 LOS ANGELES — Vanessa Bryant had found a measure of closure in February 2020 after the emotional, tribute-rich memorial for her late husband, the basketball star Kobe Bryant.

Then, days later, as she relaxed at home with friends and her younger daughters, Ms. Bryant learned that sheriff’s deputies had privately shared photos of victims’ remains at the site of the helicopter crash that killed Mr. Bryant and their 13-year-old daughter, Gianna, along with seven other people.

Ms. Bryant bolted from her home, she testified in a Los Angeles federal courthouse on Friday.

“I felt like I wanted to run down the block and just scream,” she said. “But I couldn’t escape. I can’t escape my body.”

trial stemming from Ms. Bryant’s lawsuit against Los Angeles County over the handling of crash site photos. On the trial’s eighth day in a bright, new federal courthouse in downtown Los Angeles, jurors heard Ms. Bryant describe her grief for the first time in court; she later shed light on her family’s business ventures under questioning from a county attorney. Just after she testified, Alex Villanueva, the Los Angeles County sheriff, took the witness stand and submitted to a rare round of public questioning.

Mr. Bryant’s death at age 41 stunned sports fans around the world. He was an N.B.A. icon who set records, led his Los Angeles Lakers to five championships and spent his entire 20-year playing career with the same team.

To Ms. Bryant, he was a doting “girl dad” with big dreams for their family, she said on Friday. Her voice shattered as she told stories of their home life — how she and her husband, whom she married at a young age, would compete even playing mini-golf, and how he planned to travel the world with her after he retired.

The thought that graphic images of Mr. Bryant and their daughter were being circulated publicly, she testified, made her feel helpless, violated and betrayed. Wearing a black jacket over a black dress, with her long, dark hair sweeping over her face, she paused frequently to cry.

She is seeking damages for emotional distress that she says resulted from officials from the Los Angeles County Fire and Sheriff’s Departments carelessly sharing the photos.

nine people killed when their helicopter crashed into a hill near Calabasas, Calif., as they were traveling from Orange County to a youth basketball tournament in a suburb northwest of Los Angeles. The crash was most likely caused by the pilot’s “poor decision” to fly at excessive speeds in foggy weather, according to the National Transportation Safety Board.

The trial centers on a public showdown between two titanic forces in the nation’s second-largest metropolis. On one side is Ms. Bryant, a fierce keeper of her husband’s legacy and the mother of three surviving daughters with Mr. Bryant. On the other is Mr. Villanueva, whose agency has been enmeshed in enough scandals that the county board of supervisors is asking voters for the ability to remove him from office.

Ms. Bryant has attended each day of the trial, which began on Aug. 10. She has arrived and left each day in a black SUV outside the building, surrounded by photographers and television crews who are not allowed to record proceedings inside U.S. District Judge John F. Walter’s seventh-floor courtroom.

Joining Ms. Bryant in the lawsuit is Christopher Chester, whose wife, Sarah, 45, and daughter, Payton, 13, died in the crash. Two other victims’ families settled for $1.25 million each last year.

Mr. Chester testified on Thursday about his long trail of grief, and how finding out about the photos derailed the progress he had made.

Los Angeles County and law enforcement officials have acknowledged that photos were shared but said that they were soon deleted and never entered the public domain. Attorneys for the county have said that taking photos of crash scenes is common practice and necessary for investigations.

a Los Angeles Times report weeks after the crash.

15.5 million followers, attorneys on both sides showed photos from it.

Mira Hashmall, an attorney for the county, asked Ms. Bryant about her posts promoting the latest releases from Granity Studios, her husband’s production company. She also asked about a series of trusts and companies now in Ms. Bryant’s control.

“It sounds like, on top of everything, you’re juggling a business empire,” Ms. Hashmall said.

Ms. Hashmall also asked Ms. Bryant about other sources of painful images, such as news media. She suggested that for someone whose preference was to keep many personal matters private, it must have been difficult to sit through a trial in which so many of those memories were aired in a public forum.

“I’m willing to go to hell and back to get justice for my family,” Ms. Bryant said.

Soon after Herschel Walker, the former football star, announced he would run for U.S. Senate in Georgia as a Republican, his son Christian appeared … END_OF_DOCUMENT_TOKEN_TO_BE_REPLACED

SpaceX launched four people to the International Space Station from Florida on Wednesday, as Elon Musk's company keeps up a steady pace of crewed … END_OF_DOCUMENT_TOKEN_TO_BE_REPLACED