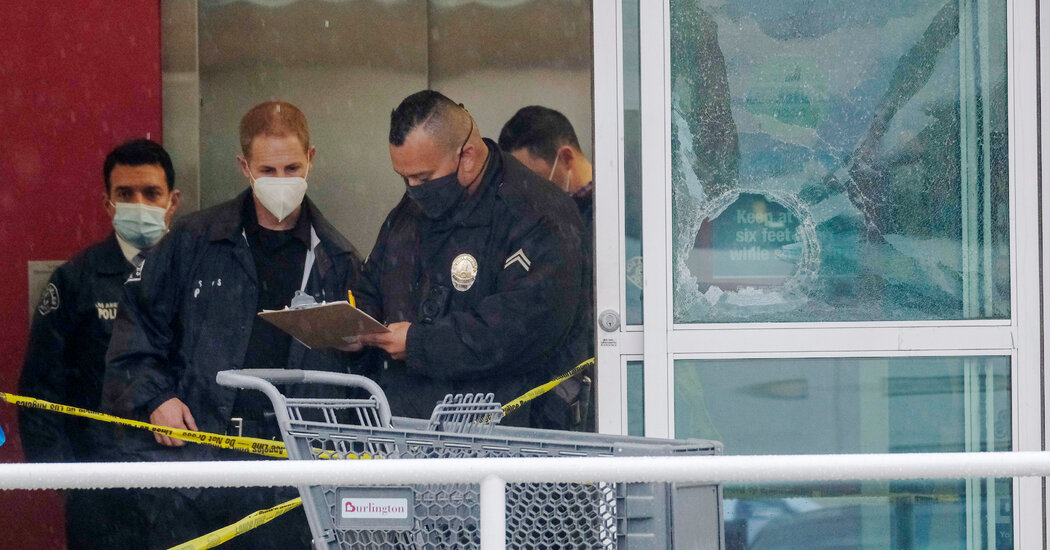 LOS ANGELES — A woman clutched at her bloodied face in an aisle splotched with red as she scrambled away from a man who had been pummeling her with a bike lock. A frightened employee at the Burlington clothing store told Los Angeles police officers that a man was “going crazy” in the store.

“I have a hostile customer in my store attacking customers!” she told dispatchers in a 911 call. “He’s walking around the store looking for people.” Someone else called in a report of “a guy with a gun.”

A scrum of officers mounted the escalators in a diamond formation, weapons drawn. Within moments of spotting the man, later identified as Daniel Elena Lopez, 24, at least one officer opened fire.

As Mr. Elena Lopez lay wounded on the ground, a woman’s anguished wails could be heard. They seemed to be coming from the dressing rooms nearby, where 14-year-old Valentina Orellana-Peralta had been with her mother. In what the police now say was a tragic accident, she too had been fatally shot by an officer’s bullet.

newly released footage from surveillance and police body cameras of the episode on Thursday that left both Mr. Elena Lopez and Ms. Orellana-Peralta dead.

The 35-minute compilation shed new light on the city’s latest high-profile police shooting, which has reignited an intense debate in Los Angeles over the role police should play in keeping communities safe.

This year, Los Angeles Police Department officers have fatally shot 18 people, The Los Angeles Times has reported, more than twice the number who were shot and killed by the department last year.

With the release of the video on Monday, Los Angeles police made it clear that it was one of their officer’s bullets that struck the 14-year-old girl in the dressing room.

“Preliminarily, it is believed the victim was struck by a round which skipped off the floor and entered the dressing room wall,” the video said. Mr. Elena Lopez did not have a gun in his possession, the police have said.

supported a $150 million cut to a $1.7 billion-plus police budget. Leaders of other cities, including the mayors of Oakland and San Francisco, made similar calls.

State officials also vowed to hold police officers accountable for misconduct. In July, a new state law took effect that requires the state’s Department of Justice to investigate police shootings that result in the death of unarmed people and decide whether to prosecute the officers involved. The department is investigating last week’s shooting in accordance with that law, officials announced.

But many efforts at reforming law enforcement practices have fizzled as leaders in Los Angeles and across California have scrambled to address fears of rising violent crime and anxiety provoked by a wave of high-profile “flash mob” robberies at high-end stores.

modest increase in funding for the Los Angeles Police Department.

Gov. Gavin Newsom earlier this month unveiled a $350 million proposal to crack down on crime, with most of the money going to local law enforcement agencies. The same day, San Francisco’s mayor, London Breed, declared a state of emergency aimed at cleaning up the “nasty streets” of the Tenderloin district, breaking with the liberal conventions that have shaped the city’s governance for decades.

Progressive activists in Los Angeles have described those declarations as a disheartening reversal.

“Nothing has changed,” said Albert Corado, whose sister was shot and killed by police officers during a standoff at a Trader Joe’s in 2018, an incident with grim parallels to the latest shooting in North Hollywood. “It’s all, ‘Spin the narrative and make it so the police don’t have to be held accountable.’”

Mr. Corado said he felt compelled to return home to Los Angeles from Minneapolis where he had been living when his sister, Melyda Corado, an assistant manager at the Trader Joe’s, was killed by a stray bullet as police exchanged gunfire with a man they had been pursuing.

The officers involved did not face charges related to Ms. Corado’s death.

Mr. Corado is now running for the Los Angeles City Council in hopes of working to dismantle the city’s police department, an agency that he said is too fundamentally flawed to be repaired.

“I think we need an entire restructuring of the city government,” Mr. Corado said. “If we tally up what the system we have in place now has actually done, it doesn’t address the reasons why people commit crime. It’s not serving anybody but the ultra wealthy.”

But some of those who are campaigning to become Los Angeles’s next mayor resisted drawing conclusions from the still-sparse information available about Thursday’s shooting.

who is the front-runner in the race. “We need to continue to push for accountability and transparency.”

Kevin de León, a member of the City Council who is also considered a top contender for mayor, said that the task facing Los Angeles’s next leader is a significant one.

“The next mayor must be capable of balancing the need for police reforms and ensuring that crime is not a threat to public safety,” he said. “I don’t think you can live in a world of absolutes.”

A sample of the fantasti Filipino food at London's Kasa & Kin and Romulo CafeKasa & KinGrowing up between the UK and US, I found it extremely … END_OF_DOCUMENT_TOKEN_TO_BE_REPLACED