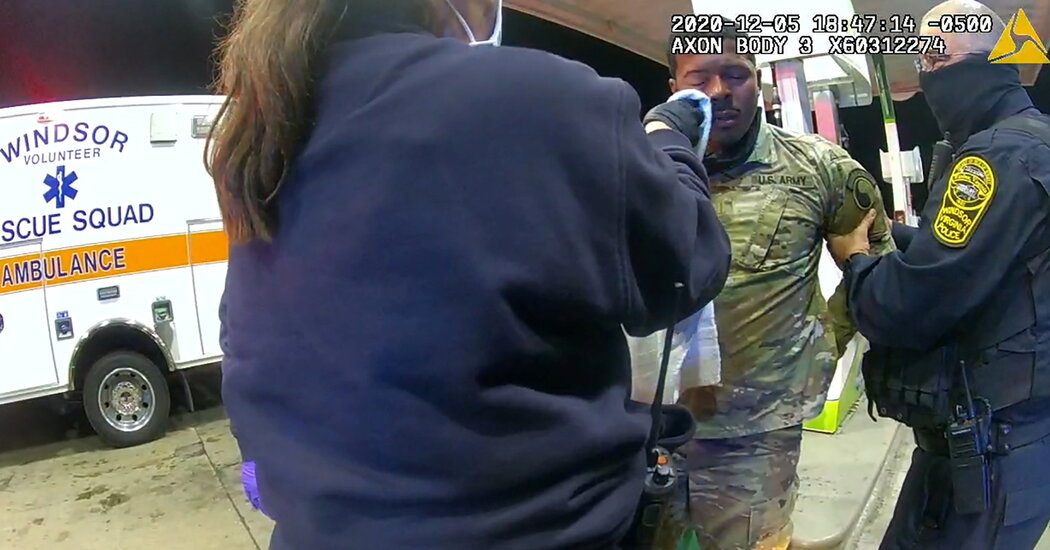 The attorney general of Virginia said on Monday that he was investigating whether there was an “unlawful pattern or practice of conduct” at the Windsor Police Department after a uniformed Black U.S. Army medic was held at gunpoint and doused with pepper spray by its officers.

Two members of the Police Department conducted a traffic stop on Caron Nazario, a second lieutenant in the U.S. Army Medical Corps, in December, during which one of the officers, Joe Gutierrez, threatened Lieutenant Nazario before dousing him with pepper spray and pushing him to the ground, according to body camera footage of the episode.

Mr. Gutierrez’s actions were “appalling” and “dangerous,” Mark Herring, the attorney general, said in an interview on CNN on Monday night.

His office has requested records from the Windsor Police Department from as far back as a decade as part of its investigation into “whether there might have been a pattern of police misconduct either by these officers specifically or more broadly within the department,” Mr. Herring said.

was fired after the Police Department conducted an internal investigation into the episode and determined that he had not followed the department’s policies, the town said in a statement on Sunday.

An investigation was underway by the Virginia State Police, Mr. Herring said, adding that it was important to also have an “independent, unaffiliated agency to fully investigate and to make sure that there is accountability.”

The investigation by the attorney general’s office was seeking to determine if “this is an isolated incident” or if there had been previous complaints of “unconstitutional policing or brutality” by the officers or the department, said Mr. Herring, a Democrat who is running for re-election this year.

The attorney general’s office has requested the personnel records for the two officers involved in the traffic stop, as well as records of any complaints to the department over the last 10 years regarding the use of force, traffic stops or “treatment on the basis of race, color and/or national origin,” according to a letter sent on Monday to the chief of police, Rodney Daniel Riddle.

tweet on Monday that he was proud of Lieutenant Nazario, who he said had “represented himself and our Army well through his calm, professional response to the situation.”

In his interview with CNN, Mr. Herring said that “it was Lieutenant Nazario who was the calm one — who was the responsible one.”

streamed live on a U.N. website.The American ambassador, Linda Thomas-Greenfield, said in a statement posted on Twitter after the meeting was … END_OF_DOCUMENT_TOKEN_TO_BE_REPLACED

As the worst violence in years rages between the Israeli military and Hamas, each night the sky is lit up by a barrage of missiles streaking across … END_OF_DOCUMENT_TOKEN_TO_BE_REPLACED