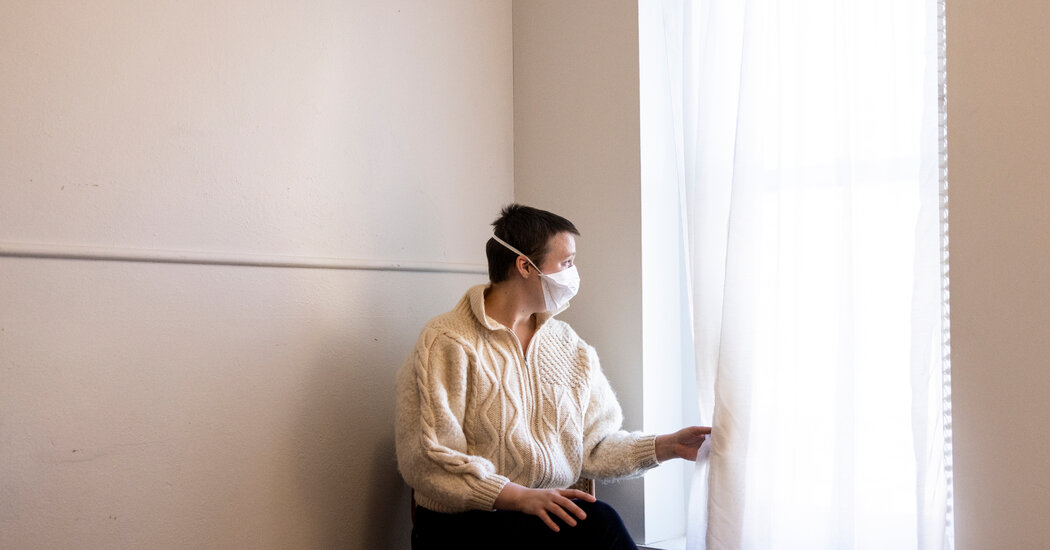 Denisse Takes’s world is very small these days. She makes a living by producing songs from her living room, plays “Animal Crossing” online with friends and leaves her home in Burbank, Calif., only occasionally to walk her dog.

Even as her social media feeds are flooded with friends and family members returning to their normal lives, she sees no one except for her husband, who donated his kidney in 2015 so that Ms. Takes, 37, could receive a compatible donor’s kidney in return.

The medication that keeps her immune system from rejecting the organ also suppresses it from creating antibodies in response to a coronavirus vaccine. Her body is so bad at fighting off infection that she has gone to the emergency room with common colds, she said. She is certain that Covid-19 would kill her.

But the isolation and depression — amplified as the rest of the world seemingly moves on from the pandemic without her — have also taken their toll. “I keep trying to hold on for my husband, honestly,” Ms. Takes said.

support for precautions plummeting and governors of even the most liberal states moving to shed mask mandates, they find themselves coping with exhaustion and grief, rooted in the sense that their neighbors and leaders are willing to accept them as collateral damage in a return to normalcy.

“I can still see your world, but I live in a different world,” said Toby Cain, 31, of Decorah, Iowa, who has lymphatic cancer and went through six rounds of chemotherapy and radiation during the pandemic, making her especially vulnerable to Covid-19.

characterized by health professionals as immunocompromised because of a disease, medication or other treatment that weakens their body’s immune response, meaning that diseases such as Covid-19 can be more deadly to them, and that vaccines offer less protection.

Tens of millions more Americans have at least one medical condition, such as asthma or diabetes, that puts them at greater risk from Covid. How much greater can vary widely; many live with little worry, while others at higher risk have felt the need to isolate from society.

That is not what Aaron Vaughn, now 12, of East Lynne, Mo., hoped for when he received a heart transplant in June 2020. Born with half a heart, he thought a transplant would give him more freedom after years of long hospital stays. But with the virus still circulating, he has not been to school or a restaurant — his last trip was to Pizza Hut, his favorite at the time — since early 2020, and sees no one but his family and doctors.

“If I could go to school, that would be cool,” Aaron said, adding, “I can’t go anywhere except the hospital.”

rollback of mask mandates in states such as New York, Illinois and California is the latest source of stress for vulnerable Americans, who fear that the rest of the country is shedding precautions without any consideration of how to keep them safe. The federal Centers for Disease Control and Prevention said last week that it was too soon to abandon masks, in part because of the potential impact on vulnerable people, but the agency indicated on Wednesday that it would soon issue new guidelines.

“Having everyone mask indoors always is not a forever strategy,” said Dr. Megan Ranney, an emergency physician and academic dean at the School of Public Health at Brown University, noting that immunocompromised people and others with vulnerabilities have always faced risks. But, she added, “We need to make sure that we have more stringent protections in place in places where people don’t have a choice about whether or not they go there.”

The best protection in the long term, Dr. Ranney said, is to keep overall infections low: The less the virus is circulating, the less likely someone will be exposed. Vaccinating almost everyone would help, she said, but millions of Americans refuse, and not enough funding has been forthcoming for improved ventilation systems in public places.

burst into public view last month in response to remarks from the C.D.C. director, Dr. Rochelle Walensky. Citing a study that said only 0.003 percent of vaccinated people had died of Covid-19, she told ABC News that 75 percent of those who had died despite vaccination had “at least four comorbidities, so, really, these are people who were unwell to begin with.”

That drove Imani Barbarin, who has several conditions that put her at high risk, including cerebral palsy and diabetes, to create the hashtag #MyDisabledLifeIsWorthy on social media, generating an outpouring from other people angry over the government’s approach.

“We just truly want to survive this,” Ms. Barbarin, 31, said, “and we have seen a complete disregard for our needs, for our community and for our voices throughout this entire pandemic.”

recent guidance from the Department of Health and Human Services saying that patients cannot be deprioritized on the basis of disability, even when hospitals enact crisis standards of care. He said the administration would announce more actions this week, including a working group of advocates.

Experts said there were ways government officials and the health care system could help vulnerable people without asking the rest of society to take stringent precautions indefinitely.

prophylactic antibody treatments such as Evusheld widely available to immunocompromised people, and managing the distribution of scarce antiviral medications so that they go to the highest-risk people, rather than those with the most resources to find them.

“It would be frustrating to have states fail to protect people at higher risk, and then try to frame things as an individual-individual trade-off between people who want to maintain mask requirements versus removing them,” Dr. Persad said.

announced on Monday that the United States would double its latest order.

“It’s extremely disheartening to see elected officials or other people in power minimize or miss the severity of the crisis we’re going through,” she said.

In rural Missouri, 12-year-old Aaron spends his time in online classes, playing Minecraft or Call of Duty with friends, and making YouTube videos of himself trying spicy foods. His friends keep asking when he will come back to school, but he knows it will not be anytime soon.

For his parents, the loss of support from those around them continues to sting. “People say, ‘You’re living in fear,’” said Chad Vaughn, his father. “And I’m like, ‘You’re damn right I’m living in fear, and I’m tired of it.’”

Daniel Acker | Bloomberg | Getty ImagesHome prices are softening in most markets across the nation.Yet home prices are still higher compared with a … END_OF_DOCUMENT_TOKEN_TO_BE_REPLACED

Joel Silver has been responsible for some of Hollywood's biggest franchises, including "The Matrix," "Die Hard," "Predator," and "Lethal Weapon."So … END_OF_DOCUMENT_TOKEN_TO_BE_REPLACED