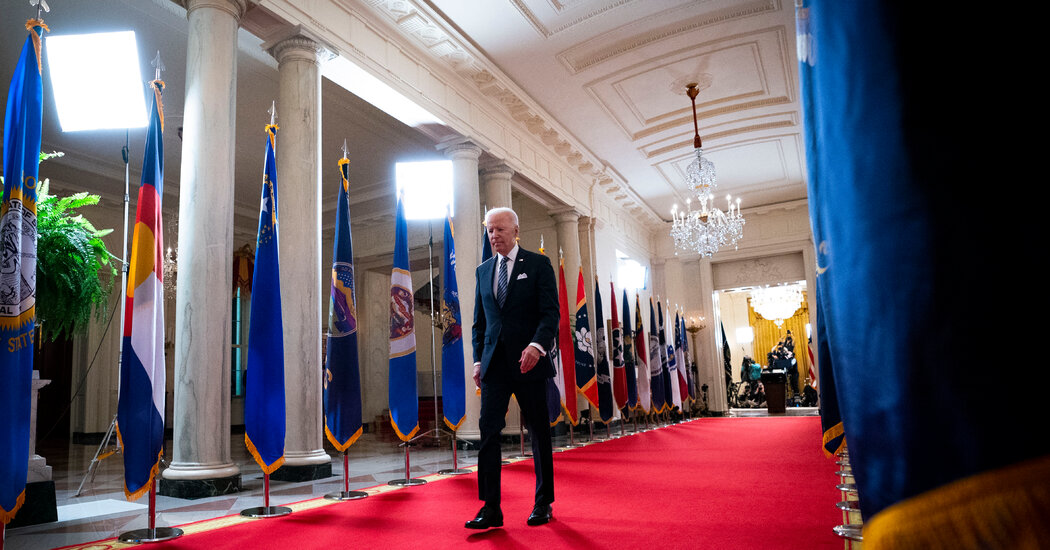 President Biden, in a prime-time address on Thursday night, exaggerated elements of the coronavirus pandemic along with his, and his predecessor’s, response to it. Here’s a fact-check.

“A year ago we were hit with a virus that was met with silence and spread unchecked, denials for days, weeks, then months.”

This is exaggerated. It is true that President Donald J. Trump downplayed the severity of the coronavirus pandemic for months. But he was not exactly silent and did not fail to respond completely. One year ago, on March 12, 2020, Mr. Trump delivered an address from the Oval Office acknowledging the threat and announced new travel restrictions on much of Europe.

estimates from the Department of Veterans Affairs, a total of 392,393 died in combat in those three wars. Combined with the 2,977 people who died in the Sept. 11, 2001, attacks, that figure would be indeed smaller than the coronavirus death toll Mr. Biden cited. It would also be lower than the 529,000 death figure tracked by The New York Times. But factoring in deaths that occurred in service but outside of combat, the toll from the three wars (more than 610,000) would be higher than the current total number of virus-related deaths Mr. Biden cited.

“Two months ago this country didn’t have nearly enough vaccine supply to vaccinate all or anywhere near all of the American public. But soon we will.”

This is misleading. By the end of last year, the Trump administration had ordered at least 800 million vaccine doses that were expected for delivery by July 31, 2021, the Government Accountability Office reported. That included vaccines undergoing clinical trials as well as those not yet approved by the Food and Drug Administration. According to Kaiser Health News, that would have been enough to vaccinate 200 million people with authorized vaccines, and more than enough for 400 million once all the vaccines were cleared for use. The current U.S. population is roughly 330 million. And, contrary to Mr. Biden’s suggestions, both administrations deserve credit for the current state of the vaccine supply.

This is misleading. When Mr. Biden took office on Jan. 20, the vaccination effort had just begun, after the F.D.A. authorized Pfizer’s Covid-19 vaccine for emergency use in mid-December.

according to the C.D.C.

In the grand sweep of world history, the U.S. is a young country. Even so, there are plenty of homes built prior to the American Revolution that still … END_OF_DOCUMENT_TOKEN_TO_BE_REPLACED

DONETSK REGION, Ukraine — Between the cracks of mortar fire and the metallic bangs of Russian self-detonating mines, Yurii, a Ukrainian Army medic, … END_OF_DOCUMENT_TOKEN_TO_BE_REPLACED