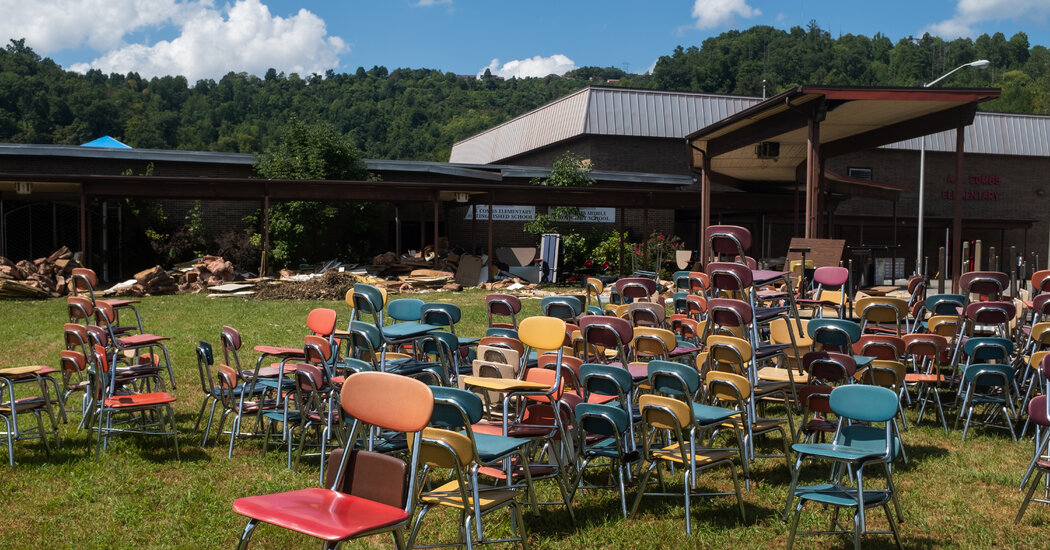 COMBS, Ky. — Robin Combs has been teaching math for more than three decades, muscle memory guiding her as she reaches for the right lesson plans, confident in what works and how best to reach her middle school students. But when floodwaters surged through Robinson Elementary School last month, the roof collapsed on her classroom and three decades’ worth of curriculum materials were destroyed.

Now, like dozens of her colleagues, Ms. Combs finds herself starting over. On a recent Friday, she was among a handful of teachers cobbling together donated supplies and cleaning out a former elementary school that will now serve teachers and students from two schools wrecked by the floods. Though her own family had running water for just one day in just over three weeks, she was focused on ensuring that her school would reopen by early September.

39 people died in the floods, including a few children and a beloved school custodian.

suffered tornado damage last winter, and flood survivors from nearby Tennessee and across the country have called to offer aid and advice.

Twenty-five school districts were affected by the floods, with more than a dozen buildings severely damaged and unfit to hold classes this year. Simply replacing Robinson Elementary, the school where Ms. Combs teaches, could cost close to $25 million.

Some of the affected districts are floating plans to start classes before the end of September or later into the fall. In the meantime, improvisation is everywhere. Chasity Short, a third-grade teacher in Perry County, will work out of a refurbished girls’ locker room this year.

“As long as all of our people are kept together, we don’t care,” Ms. Short said, rolling white paint over a bookshelf she had saved from a dumpster. She added, “We’ll teach out of anywhere.”

Teachers have pleaded with administrators and state officials to avoid splitting up schools, but that may not be possible in all cases.

“I’ve got to look at kids and adults and say, ‘Where’s the safest place that I can put those kids and educate them?’” said Jonathan Jett, the superintendent in Perry County.

Mr. Jett was able to relocate Robinson Elementary and another flooded K-12 school, Buckhorn, to an elementary school building left empty when schools consolidated, but other superintendents were still trying to figure out where to house their displaced students. It will take years to repair and replace the damaged buildings, and staff members are unsure how to restructure some bus routes when some roads remain impassable and districts can span more than four dozen miles.

Teachers and others at the school also acknowledged looming worries about their ability to meet the exacerbated needs and emotional trauma of students whose homes were destroyed. They are concerned about already small schools losing more students and teachers — and uncertain what happens if outside help dries up.

“We can make do with this, but not in the long term,” said Jamie Fugate, the principal at Robinson Elementary, standing in the empty room that is set to be his office in the refurbished school. Classes are set to begin there Sept. 6, after Labor Day.

Even as many teachers have suffered flood damage to their own homes, some have staged outdoor gatherings to boost morale and catch a glimpse of their students. At one elementary school, they held a drive-through event, where teachers passed out bags with toothbrushes, toothpaste, chips and toys.

The students themselves are eager to return.

Charlie Boggs, 11, was “hoping it’d be like a movie” when he began fifth grade at Martha Jane Potter Elementary School on the outskirts of Whitesburg. He imagined the taste of fame that would come with playing on the football team, the Pirates, and wearing its signature gold helmet. But the school was among those flooded, and it remained unclear when classes would start up again.

“It’s special in a bad way,” he said, noting that the floods came after hard years of pandemic learning. He paused, then added, “At the very least, you’ll have good stories.”

Charlie’s mother, Tara Boggs, is the sixth-grade language arts teacher at Fleming Neon Middle School in Neon, Ky. With the school’s basement flooded, the power has been off in the rest of the school, leaving Ms. Boggs and other volunteers to sort supplies for delivery in near darkness for weeks.

“I just hate it — I hate that some of these kids will never, ever be the same again,” Ms. Boggs said. But, she added, “the roots run much deeper than the floodwaters can wash away.”

At nearby Letcher County Central High School, school officials debated whether to play the first scheduled Friday night home football game of the season on Aug. 19. The school, while largely spared any damage, had become a distribution center for donations. Football camp had been canceled, leaving little time to practice in pads, and the cheerleading uniforms had been destroyed in storage.

But after consulting with the players, officials agreed to move forward, hoping to give the community a diversion.

“It’s silly, but a football Friday night, that’s something I thought we needed,” said Junior Matthews, the team’s coach.

Nine players and two coaches had flooded homes, but several had joined the throngs of residents helping with relief efforts. In the days before the game, they juggled practice on top of hours of volunteer work.

Those players included Quentin Williams, 16, who goes by Q, a sophomore who has thrown himself into the recovery, shuttling boxes to people’s cars and working long hours at the school distribution center.

“I felt bad just sitting at the house. It felt good to help people who can’t help themselves,” he said on a recent afternoon, sitting at a Mexican restaurant for his family’s post-church lunch.

The teen had darted out of worship earlier that morning during a quick burst of rain, knowing the storm would rattle his 6-year-old cousin at the children’s service next door.

Now living with relatives, Q’s mother, Kristi Williams, had spent the days leading up to the game tracking down copies of vital paperwork damaged in the flood and grieving the home she had worked hard to pay off and where she had raised her children.

But come Friday, she was among the mothers tailgating outside, with Dollar Store decorations bought to match the tropical theme picked by the student fans. She cried at the top of the bleachers as she watched Q run through the inflatable tunnel and kneel to pray on the sideline, thinking, she later said, of how the trophies and awards he had earned had been lost and how he was now starting over.

Ms. Williams said she was relieved Q and the rest of his team had a chance to play.

“Just to see him not in mud or carrying water,” she said. “He gets to do what he loves.”

When lightning and some rain forced a delay, people in the stands grew visibly anxious and fidgeted in their seats. The band directors hustled their students inside.

But once the weather cleared and the game resumed, the Letcher County Central Cougars began to score. They overcame a double-digit deficit against the Shelby Valley Wildcats. By the end, they had sealed a 52-48 win after returning an interception for a touchdown, and the crowd roared.

“I don’t know if it could have been better scripted,” Mr. Matthews said.

Hometown Deli, Paulsboro, N.J.Mike Calia | CNBCThree men were charged with fraud and other crimes in a scheme involving a company that was worth $100 … END_OF_DOCUMENT_TOKEN_TO_BE_REPLACED

The childhood home of "The Morning Show" actor Nestor Carbonell recently hit the market in Greenwich, CT, for $4.4 million.Fans will appreciate that … END_OF_DOCUMENT_TOKEN_TO_BE_REPLACED