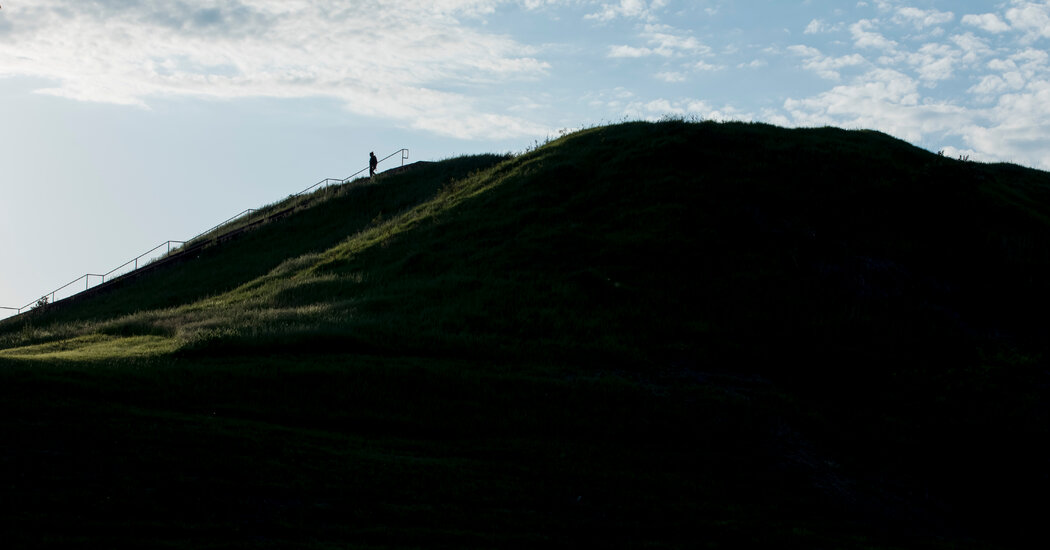 That finding is in keeping with our knowledge of Cahokian agriculture, says Jane Mt. Pleasant, professor emeritus of agricultural science at Cornell University who was not involved in the study. While Cahokians cleared some land in the uplands, Dr. Mt. Pleasant said, the amount of land used remained stable. While heavy plow techniques quickly exhausted soil and led to the clearing of forests for new farmland, hand tool-wielding Cahokians managed their rich landscape carefully.

Dr. Mt. Pleasant, who is of Tuscarora ancestry, said that for most academics, there is an assumption “that Indigenous peoples did everything wrong.” But she said, “There’s just no indication that Cahokian farmers caused any sort of environmental trauma.”

If anything, says John E. Kelly, an archaeologist at Washington University in St. Louis, the explanation of a Cahokia battered by denuded bluffs and flooding actually reflects how later European settlers used the area’s land. In the 1860s, bluffs upstream from Cahokia were cleared for coal mining, causing enough localized flooding to bury some of the settlement’s sites. European deforestation created a deep overlying layer of eroded sediment, distinct from the soils of the pre-contact floodplain.

“What Caitlin has done in a very straightforward fashion is look at the evidence, and there’s very little evidence to support the western view of what native people are doing,” Dr. Kelly said.

Why, then, did Cahokia disappear? Environmental factors, like drought from the Little Ice Age (1303-1860), may have played a role in the city’s slow abandonment. But changes in the inhabitants’ politics and culture shouldn’t be overlooked, Dr. Mt. Pleasant said. By the 1300s, many of the great mounds of Central Cahokia stood abandoned, and life in the city had seemingly shifted to something more decentralized. Nor did the peoples of Cahokia vanish; some eventually became the Osage Nation.

Outside of natural disasters like the volcanic eruption that destroyed Pompeii, Dr. Rankin notes, the abandonment of a city tends not to happen all at once. It’s more like a natural progression as people slowly ebb out of an urban environment that stops meeting their needs.

AUSTIN, Texas--(BUSINESS WIRE)--As the first multifamily management company to be recognized in the Public Relations and Marketing Excellence Awards, … END_OF_DOCUMENT_TOKEN_TO_BE_REPLACED

There have been whispers of cooling housing and rental prices in the San Francisco Bay Area, but that hasn't yet translated into practical, noticeable … END_OF_DOCUMENT_TOKEN_TO_BE_REPLACED

Cars pass in Independence Square at twilight in Kyiv, Ukraine, Monday, Oct. 31, 2022. Rolling ... [+] blackouts are increasing across Ukraine as the … END_OF_DOCUMENT_TOKEN_TO_BE_REPLACED