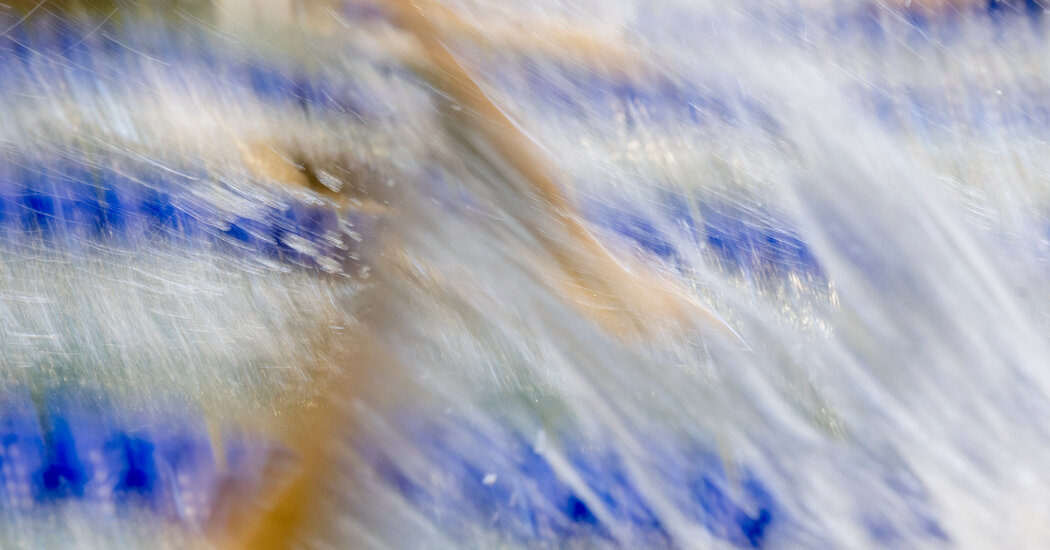 ATLANTA — The women on the Princeton University swim team spoke of collective frustration edging into anger. They had watched Lia Thomas, a transgender woman who swam for the University of Pennsylvania, win meet after meet, beating Olympians and breaking records.

On Jan. 9, the team met with Robin Harris, executive director of the Ivy League athletic conference.

The swimmers, several of whom described the private meeting on condition of anonymity, detailed the biological advantages possessed by transgender female athletes. To ignore these, they said, “was to undermine a half-century fight for female equality in sport.”

The rancor stifles dialogue. At meets, Ms. Thomas has been met by stony silence and muffled boos. College female athletes who speak of frustration and competitive disadvantage are labeled by some trans activists as transphobes and bigots, and are reluctant to talk for fear of being attacked.

spoken only to Sports Illustrated, saying, “I’m not a man. I’m a woman, so I belong on the women’s team.”

Even nomenclature is contentious. Descriptive phrases such as “biological woman” and “biological man” might be seen as central to discussing differences in performance. Many trans rights activists say such expressions are transphobic and insist biology and gender identity are largely social constructs.

Some trans activists try to silence critics, whom they derisively call TERFs, which stands for trans-exclusionary radical feminists. A spokeswoman for a gay rights group urged a reporter not to “platform” — that is not to quote — those she said held objectionable views, including Martina Navratilova, the retired tennis legend, a champion of liberal and lesbian causes. Ms. Navratilova argues that transgender female athletes possess insurmountable biological advantages.

“So I’m a ‘TERF’ — OK, that’s the way you want to go?” Ms. Navratilova said in response. “I played against taller women, I played against stronger women, and I beat them all. But if I faced the male equivalent of Lia in tennis, that’s biology. I would have had no shot. And I would have been livid.”

sent a letter to the school, released by a lawyer, saying the swimmer had “an unfair advantage.” Brooke Forde, an Olympic silver medalist with Stanford, however, supported Ms. Thomas. “Social change is always a slow and difficult process, and we rarely get it correct right away,” she stated.

The landmark gender equality legislation, which was signed into law in 1972, transformed women’s access to education, sports and much more.

Not long afterward, a Princeton eating club barred a female swimmer from joining, saying her “transphobia” might bring it disrepute, according to a Princeton swimmer.

Finally, inescapably, America’s hyperpartisan politics has electrified this debate. Librarians have been told to remove books with transgender themes from shelves. And Republican-dominated legislatures in 18 states have introduced restrictions on transgender participation in public school sports in recent years, according to data from the Human Rights Campaign, an L.G.B.T.Q. advocacy group.

In Texas, Gov. Greg Abbott demanded agencies investigate parents and doctors who assist children in transitioning, which he termed “child abuse.” In Florida, Gov. Ron DeSantis said he would “reject lies” and refused to recognize Ms. Thomas as the winner of the 500-yard freestyle championship.

ranked 32nd in the 1,650-yard freestyle; among women, she ranked eighth and won a race this season by a margin of 38 seconds.

And she ranked 65th in the men’s 500-yard freestyle but won the title as a female.

“Lia Thomas is the manifestation of the scientific evidence,” said Dr. Ross Tucker, a sports physiologist who consults on world athletics. “The reduction in testosterone did not remove her biological advantage.”

Testosterone levels are crucial but do not invariably predict performance in every sport. Chris Mosier is a 41-year-old elite athlete who transitioned to male in 2015 and had no testosterone-fueled developmental advantage. Yet he has beaten elite racewalking biological men.

examined 82 events across six sports and found women’s world record times were 10 percent slower than those of men’s records.

“Activists conflate sex and gender in a way that is really confusing,” noted Dr. Carole Hooven, lecturer and co-director of undergraduate studies in human evolutionary biology at Harvard University. She wrote the book “T: The Story of Testosterone.” “There is a large performance gap between healthy normal populations of males and females, and that is driven by testosterone.”

The sprinter Allyson Felix won the most world championship medals in history. Her lifetime best in the 400 meters was 49.26 seconds; in 2018, 275 high school boys ran faster.

Renée Richards was a pioneer among transgender athletes. An ophthalmologist and accomplished amateur tennis player — she played in the U.S. Open and ranked 13th in the men’s 35-and-over division — she transitioned in 1975 at age 41. She joined the women’s pro tennis tour at age 43, ancient in athletic terms. Ms. Richards then made it to the doubles final at Wimbledon and ranked 19th in the world before retiring at 47.

Ms. Richards has said she no longer believes it is fair for transgender women to compete at the elite level.

an interview. “I’ve reconsidered my opinion.”

wrote. “It feels like that final spot was taken away from me because of the N.C.A.A.’s decision to let someone who is not a biological female compete.”

That decision prevented her from qualifying for All-America honors.

wrote in Sociology in Focus: “Nature loves diversity, but humans love simplicity. Separating males from females may be socially useful, but when the dividing lines limit and oppress, we have to acknowledge they are social constructions.”

Anna Posbergh, a doctoral candidate at the University of Maryland, is a former pole-vaulter who studies the mechanics of human movement and gender and athletes. She sees notions of gender disadvantage in sports as rooted in culture and an outdated view of what women can achieve.

“I’m beginning to question the idea of sex segregation in sport,” she said. “We need to learn to sit with discomfort.”

This strikes some feminists and scientists as a walk into strange territory. Kathleen Stock, a British philosopher whose work is often grounded in her feminist and lesbian identity, has carved out positions on transgender rights that have made her a lightning rod. She has written “Material Girls: Why Reality Matters for Feminism,” and argues against the insistence that one’s gender identity is all. That is to miss, she said, the profound importance of the lived experience of being born a biological female.

“We are caught up in this fever dream,” she said in an interview. “How could it be that a social construct and not the material reality of being a woman is guiding our thoughts and our physical performance?

“I find it incredible that we have to point this out.”

Lia Thomas was not the only transgender athlete to swim at the N.C.A.A. championship. Iszac Henig, a transgender man, swam the 100-yard women’s freestyle for Yale and attracted little attention. Yet his story challenges the argument that transgender athletes should swim under their gender identity.

Mr. Henig finished in a tie for fifth in the 100-yard women’s race with a time of 47.32 seconds. Had he chosen to swim against men, Mr. Henig would not have qualified for the championship.

Mr. Henig and Ms. Thomas swam in the race in which they had the greatest advantage. Every decision, a scientist noted, comes adorned with moral thorns.

In Britain, Emily Bridges, a record-breaking male cyclist, recently declared her intent to race as a woman. This has drawn passionate objections from the top women in cycling, who fear losing races and much prize money.

By way of solution, some point to golf, where in amateur competitions, a superior golfer takes a handicap — docking herself strokes — when competing against lesser players. Applied to swimming, a panel might examine Ms. Thomas’s race times and subtract seconds and let her swim.

The Macdonald-Laurier Institute, a policy organization based in Ottawa, argues for an “open category” for men, transgender athletes and biological females, anyone who cares to try her/his/their hand.

An exclusively female category would remain for biological women. This solution would forestall the need for transgender women to take hormone-suppressing drugs.

Some transgender activists argue such distinctions would be insulting, notwithstanding the decision of those such as Mr. Henig to race in their former gender.

The solution, a balance of gender and biology, looks distant. And yet, no end of anguish accompanies the status quo.

In Atlanta, a father, who declined to give his name, sat in the stands and watched Ms. Thomas in the 200-yard freestyle. She was, he noted, far taller than her competitors, with long legs and arms, big hands and broad shoulders. A day earlier his daughter had lost to Ms. Thomas in the 500-yard race, and nothing about that race felt fair to him or his daughter.

The father was polite as Ms. Thomas was announced and clapped twice.

Ms. Thomas lost by a broad margin. She slipped out of the pool, picked up a towel, sidestepped embracing swimmers and walked out, a solitary figure.

The father watched and shook his head.

“In fairness to Lia,” he said, “the emotional toll.”

DALLAS — The rollback of abortion rights has been received by many American women with a sense of shock and fear, and warnings about an ominous … END_OF_DOCUMENT_TOKEN_TO_BE_REPLACED

The poshest place in California's Coachella Valley is The Madison Club. This exclusive gated community in La Quinta is where A-listers and tycoons … END_OF_DOCUMENT_TOKEN_TO_BE_REPLACED