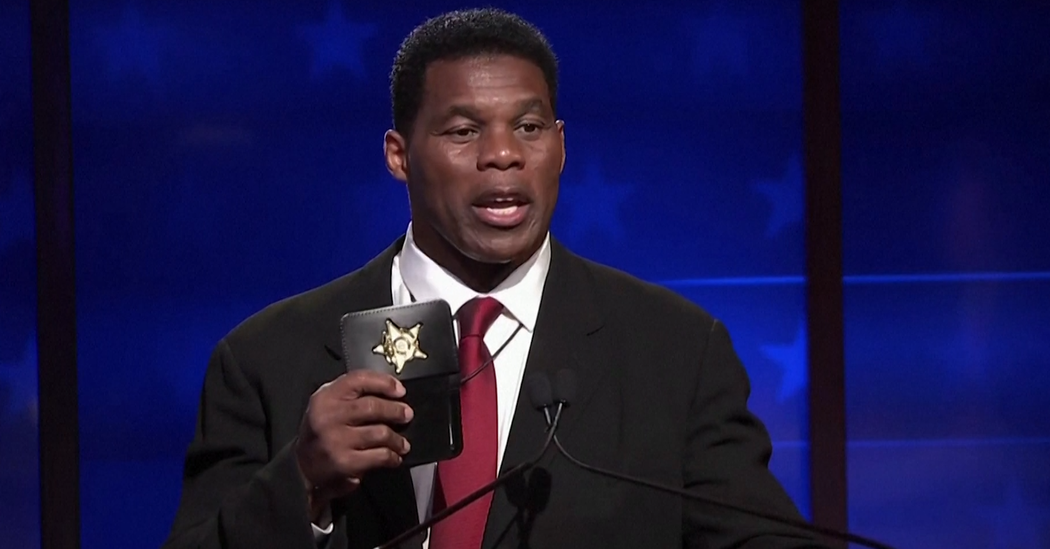 In a moment that ricocheted online, Mr. Walker, a football legend endorsed by former President Donald J. Trump, was responding to Mr. Warnock’s accusations that he had misrepresented himself as a law enforcement officer and had previously threatened to commit acts of violence.

But Mr. Walker’s flaunting of the honorary badge, a recognition not unusual for celebrities to receive, brought new scrutiny to his credentials and the loosely defined relationships that can emerge between law enforcement agencies and famous people.

The moment unfolded after Mr. Warnock made claims about Mr. Walker’s professional history, saying that Mr. Walker “has a problem with the truth.”

The Cobb County Courier that Mr. Wilkins did not have the same authority as a regular deputy sheriff to carry a weapon and arrest people. She characterized his role as being a liaison and partner.

In 2021, the sheriff’s office in Henry County, Ga., which is about 30 miles southeast of Atlanta, gave a member of the N.B.A. Hall of Fame, Shaquille O’Neal, the title of director for community relations.

Neil Warren, who was the Cobb County sheriff when he named Mr. Walker an honorary deputy sheriff, endorsed his Senate bid in July.

In a statement at the time, Mr. Warren said that Mr. Walker “partnered with the Cobb County Sheriff’s Office for over 15 years” and “led trainings on leadership, advocated for mental health, encouraged countless officers, and was always there to lend a hand whenever we needed him.”

But many others express significant skepticism about the kind of honorary recognition granted by law enforcement.

“Georgia sheriffs were seriously handing out those badges like candy in a candy dish,” J.Tom Morgan, a former district attorney in DeKalb County, Ga., who was elected as a Democrat, said in an interview on Saturday. “That badge gives you no law enforcement authority. He doesn’t have the power to write a traffic ticket.”

Mr. Morgan, who is now a professor at Western Carolina University, said the badges became so widely abused that the Georgia Sheriffs’ Association curtailed the practice of giving them out.

exaggerated his work in law enforcement before. In 2019, he told soldiers at Joint Base Lewis-McChord in Washington State that he was a Federal Bureau of Investigation agent, which was false. He has also repeatedly said in campaign stump speeches that he worked as a member of law enforcement, but he did not.

In Georgia, the role of sheriff is an elected partisan office, and there can be rewards for both the donors and recipients of honorary badges.

According to the National Sheriffs’ Association, there are no formal guidelines stipulating the use and appearance of honorary badges — and what distinguishes them from real ones.

“It should be understood that an honorary badge is for the trophy case,” Pat Royal, a spokesman for the National Sheriffs’ Association, said in an email on Saturday. Mr. Royal specified that he was referring to honorary badges in general, not Mr. Walker’s.

Mr. Walker’s performance during the debate yielded a flurry of memes and widespread derision online.

tweeted on Friday night, “I sometimes pull out my Star Fleet badge to get past security at Star Trek conferences.”

“He was made an honorary deputy sheriff in Cobb County, Georgia, and spent 15 years helping that department and discussing with deputies how to handle mental health situations,” Mr. Erickson said on Friday night on Twitter. “But I know facts don’t matter on Twitter.”

The image of Mr. Walker waving his badge during the debate called to mind another celebrity with a penchant for badges: Elvis Presley. During a meeting in 1970 with President Richard M. Nixon, the King famously asked for a federal narcotics agency badge. Mr. Presley’s widow, Priscilla Presley, discussed the badge’s allure in her memoir, “Elvis and Me.”

“The narc badge represented some kind of ultimate power to him,” Ms. Presley wrote.

AUSTIN, Texas--(BUSINESS WIRE)--As the first multifamily management company to be recognized in the Public Relations and Marketing Excellence Awards, … END_OF_DOCUMENT_TOKEN_TO_BE_REPLACED

There have been whispers of cooling housing and rental prices in the San Francisco Bay Area, but that hasn't yet translated into practical, noticeable … END_OF_DOCUMENT_TOKEN_TO_BE_REPLACED

Cars pass in Independence Square at twilight in Kyiv, Ukraine, Monday, Oct. 31, 2022. Rolling ... [+] blackouts are increasing across Ukraine as the … END_OF_DOCUMENT_TOKEN_TO_BE_REPLACED