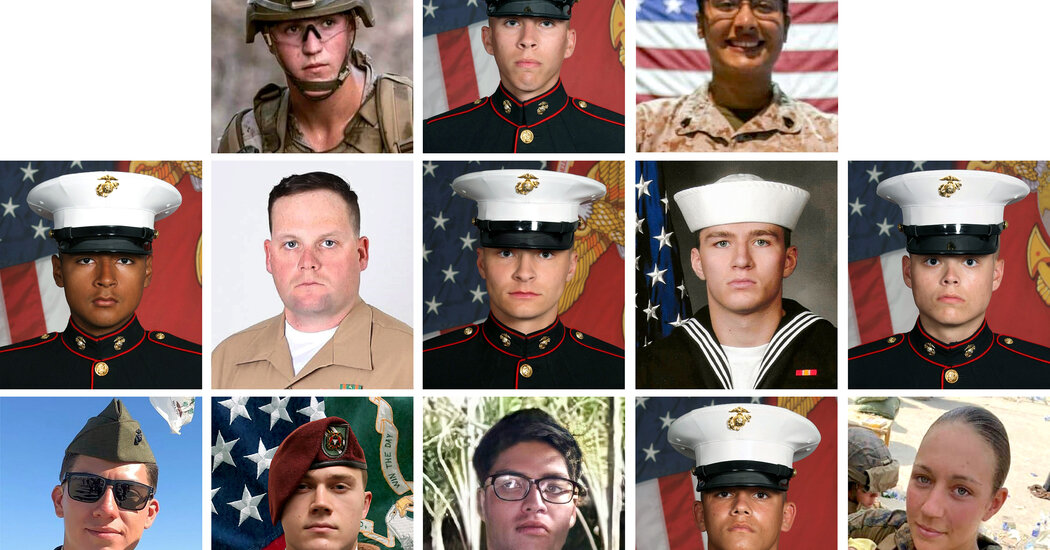 The Department of Defense on Saturday identified the 13 members of the U.S. military who were killed in the attack on the airport in Kabul, Afghanistan, on Thursday as they worked to evacuate people to safety. They hailed from across the country — from California to Wyoming to Tennessee — and had an average age of just over 22. Eleven were Marines, one was a Navy medic and another was a member of the Army.

Here is what we know about them.

Staff Sergeant Hoover was a born leader, his father Darin Hoover said, who loved the United States and was on his third tour in Afghanistan. “He led his men into that, and they followed him, but I know — I know in my heart of hearts, he was out front,” Mr. Hoover said. “And they would’ve followed him through the gates of hell if that’s what it took, and, ultimately, that’s pretty much what he did.”

told the mayor of Lawrence. Her former junior R.O.T.C. instructor recalled her as an “absolute warrior” in high school, and Marine First Lt. John Coppola said in a statement that she had been “crucial to evacuating thousands of women and children.” The Dominican Republic’s embassy in the U.S. said that she was Dominican-American.

In Sergeant Gee’s most recent post on Instagram, less than a week ago, she stands next to a long line of people waiting to file into a military plane at the Kabul airport. “Escorting evacuees onto the bird,” she wrote. In another post, in which she is holding a child in Kabul, she wrote, “I love my job.” A fellow sergeant wrote on Facebook that Sergeant Gee’s car was still in the lot at a Marine Corps base in North Carolina: “I drove it around the parking lot every once in a while to make sure it would be good for when she came home.”

told a reporter in Southern California that her son had recently carried an Afghan toddler several miles to safety, and asked people to light a candle in his honor. Corporal Lopez’s parents both work for the Riverside County Sheriff’s Department in California, his father as a captain and his mother as a deputy. “Like his parents who serve our community, being a Marine to Hunter wasn’t a job; it was a calling,” the Riverside Sheriffs’ Association wrote in a statement.

Corporal Page grew up in Red Oak, Iowa, and in the area around Omaha, and joined the Marines after high school, his family said in a statement. He had four siblings and was a member of the Boy Scouts, played club hockey, hunted with his father and had a “soft spot in his heart for dogs,” they said. “To his younger siblings, he was their favorite jungle gym and to his friends, he was a genuinely happy guy that you could always count on,” the family said, adding that he was being mourned by his parents, stepparents, siblings, grandparents and his girlfriend.

said that Corporal Sanchez “still had his entire life ahead of him” and that the young man had sacrificed himself by “putting himself into harm’s way” as part of the mission in Kabul. Gov. Eric Holcomb of Indiana vowed “to honor him in every way” possible. “Few among us answer a call of duty so dangerous as Corporal Sanchez volunteered to do,” he said.

Lance Corporal Espinoza’s mother told a local television station that she had received a call at 2:30 a.m. informing her of her young son’s death. “I am proud of him because of what he did but as a mother, you know, it’s hard,” his mother, Elizabeth Holguin, told the station, KGNS-TV, as she teared up. The station reported that Lance Corporal Espinoza’s sister had just turned 13. The corporal was born in Laredo, Texas, his family said, and he had been stationed in Jordan for two years before being transferred to Kabul about a week ago. “He always knew” how much his parents loved him, Ms. Holguin said.

KMOX radio in St. Louis. “It’s something he always wanted to do and I’ve never seen a young man train as hard as he did to be the best soldier he could be,” Mr. Schmitz said, adding that the family was both devastated and furious. “Somebody just came along and took the easy way out and ended everything for him and for us — and for those others that were killed,” he said.

Lance Corporal McCollum had dreamed of becoming a Marine ever since he was 3 years old, his father, Jim, said in an interview. He, too, was recently transferred from Jordan to Afghanistan, and Mr. McCollum began checking his phone for a little green dot on a messaging app that showed that his son was online — and OK. When news came that 13 Americans had died in the attack, he again checked for the dot and sent him a message with no response. “In my heart yesterday afternoon, I knew,” Mr. McCollum said, adding that his son was “a beautiful soul.”

told KCBS-TV. His grandmother told the station that Lance Corporal Merola would frequently say he wanted to come home to his family. He had been transferred to Afghanistan about a week and a half ago, and left a voice mail message with his mother saying he would not be able to talk to her for a while and that he loved her. Los Osos High School in Southern California, from which he recently graduated, held a moment of silence for him at a football game on Friday.

Lance Corporal Nikoui was a young martial arts champion whose father told Reuters that he had watched television nonstop for updates on the attack until he learned the devastating news from three Marines at his door. “He was born the same year it started, and ended his life with the end of this war,” Steve Nikoui said. He told The Daily Beast that his son loved his Marine family and wanted to “make a career out of this,” and added that he was frustrated that President Biden had sent his and others’ children into harm’s way. “They sent my son over there as a paper pusher and then had the Taliban outside providing security,” he said.

Mr. Soviak grew up playing football in a small northern Ohio community where his death has left a “Maxton-sized hole” in his loved ones’ lives, his sister Marilyn wrote in an Instagram post. He was a Navy medic who had graduated from high school in 2017. “Everybody looked to Max in tough situations,” said Jim Hall, his high school football coach, who described Mr. Soviak as a deeply loyal friend. “He was energetic. He wore his emotions on his sleeve. He was a passionate kid. He didn’t hold anything back.”

told WATE-TV in Knoxville, Tenn. “He was a believer so we will see him again in heaven.” He had been in the military for five years, his grandfather said, and his stepmother told the station that he had planned to move to Washington when he returned to the United States. One of his former teachers said he had been “quiet but confident” in school and that he had written an essay that said his role models were people who stand up against power to help people. “He wrote that nine years ago as a 14-year-old boy, not knowing the man he was going to become,” Angela Hoffman, the teacher, told the station.

The Mississippi River town of Ste. Genevieve, MO, might be the ideal spot for a buyer in search of a refreshing idea.This mixed-use structure on the … END_OF_DOCUMENT_TOKEN_TO_BE_REPLACED

More From ForbesJan 26, 2022,09:00am ESTCompany Named For Jetsons Son Unveils Autonomous Cargo EVTOL Drone Of The Near … END_OF_DOCUMENT_TOKEN_TO_BE_REPLACED

The prison in Hasaka where thousands of Islamic State fighters are held, in 2019.Credit...Ivor Prickett for The New York TimesThe prison at the center … END_OF_DOCUMENT_TOKEN_TO_BE_REPLACED