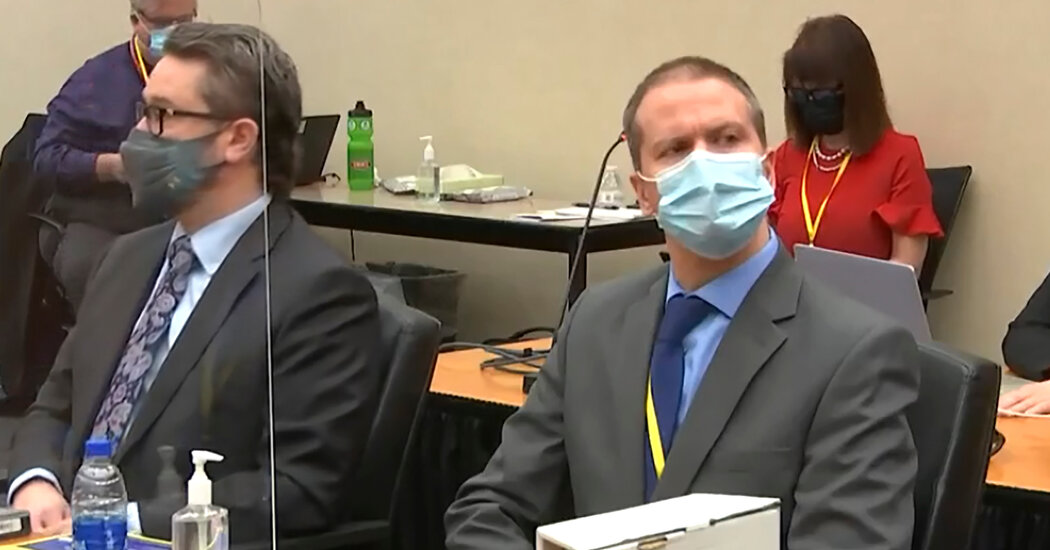 By highlighting the emotional trauma Mr. Floyd’s arrest caused witnesses, prosecutors seemingly hoped to convince jurors that Mr. Chauvin’s actions had been clearly excessive to people who saw them in real time. One witness, Darnella Frazier, now 18, testified that she has been haunted by what she saw, sometimes lying awake at night “apologizing to George Floyd for not doing more and not physically interacting and not saving his life.”

The fateful arrest was replayed from every angle.

For the first time, the final moments before Mr. Floyd’s arrest were shown in detail. Surveillance video from Cup Foods, along with testimony from the store clerk, showed Mr. Floyd walking around the store, chatting and laughing with customers, and eventually buying a pack of cigarettes with a $20 bill that the clerk suspected was fake.

Footage from police body cameras then replayed the arrest from beginning to end. It showed an officer approach Mr. Floyd with his pistol drawn, and captured audio of Mr. Floyd’s fearful reaction: “Please, don’t shoot me,” he said. Mr. Floyd appeared terrified, first of the pistol, then of being held in a police car.

As Mr. Chauvin pinned him to the ground, the footage captured the moments when the officers checked for a pulse and found none, but took no action.

A tactic that was called ‘deadly force.’

On Friday, Lt. Richard Zimmerman, the longest-serving officer in the Minneapolis Police Department, offered scathing condemnation of Mr. Chauvin’s use of force. He said Mr. Chauvin violated police policy and called his actions “totally unnecessary.” Putting a knee on someone’s neck while they are handcuffed in a prone position, he said, qualifies as “deadly force.”

“If your knee is on a person’s neck, that can kill them,” Lieutenant Zimmerman said, adding that people who are handcuffed generally pose little threat to officers. Mr. Zimmerman’s testimony, bolstered by his more than 35 years on the force, could be a major setback for a crucial aspect of Mr. Chauvin’s defense — that his actions were not only legal, but within the bounds of his training.

AUSTIN, Texas--(BUSINESS WIRE)--As the first multifamily management company to be recognized in the Public Relations and Marketing Excellence Awards, … END_OF_DOCUMENT_TOKEN_TO_BE_REPLACED

There have been whispers of cooling housing and rental prices in the San Francisco Bay Area, but that hasn't yet translated into practical, noticeable … END_OF_DOCUMENT_TOKEN_TO_BE_REPLACED

Cars pass in Independence Square at twilight in Kyiv, Ukraine, Monday, Oct. 31, 2022. Rolling ... [+] blackouts are increasing across Ukraine as the … END_OF_DOCUMENT_TOKEN_TO_BE_REPLACED