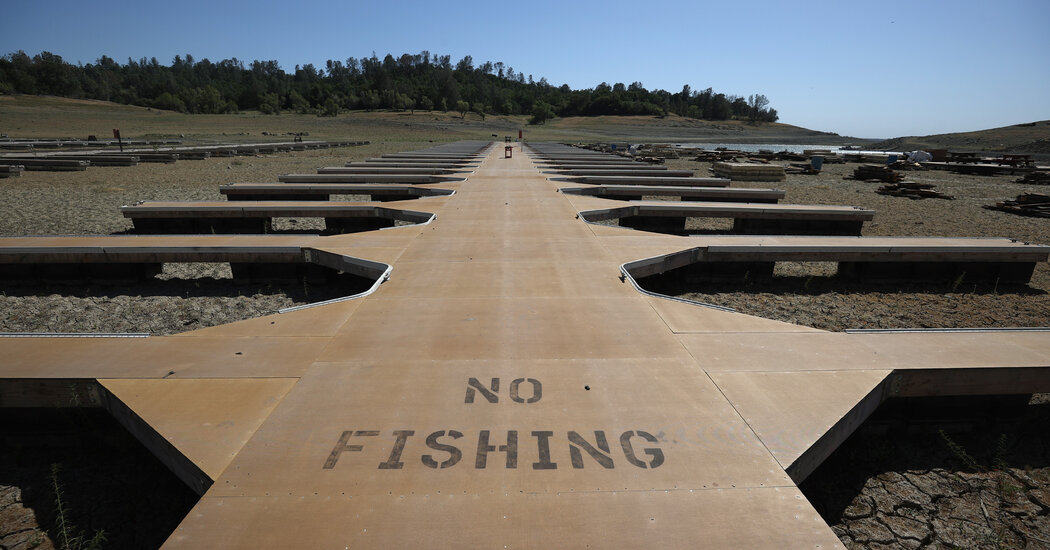 Even as California moves toward a full reopening from pandemic restrictions next month, many counties are still in danger.

Earlier this month, Gov. Gavin Newsom extended emergency drought orders to 41 counties across the state. According to the United States Drought Monitor, 84 percent of the West is now in drought conditions, with 47 percent rated as “severe” or “extreme.” In California, 73 percent of the state falls into those categories. And if the recent Palisades fire in western Los Angeles is any indication, an active wildfire season could already be here.

All eyes are on the critical resource that can help fight the effects of another dry summer: water.

California relies on wet years to replenish its water supply during dry years. And while 2019 was a flood year, it has been dry since.

The state’s drought from 2012 to 2016 set a new benchmark, Jeffrey Mount, a senior fellow with the Public Policy Institute of California’s Water Policy Center, told me this week. “That drought was significant because it was not only dry, with very limited snowpack, but it was the warmest in recorded history. The current drought — now two years old — is shaping up in the same way.”

In terms of water, “conditions are particularly dire north of Sacramento to the Oregon border, which is driving the crisis on the Klamath River,” Mount said. On the other hand, Los Angeles, San Diego, San Francisco and other major cities are in pretty good shape, he added.

Yet California is essentially in the same place the state was in during the third year of the last drought — and this is only Year 2.

When the state’s water reservoirs are drawn down, farmers are forced to turn to groundwater, Mount told my colleague Jill Cowan last month. Until recently, though, the state’s groundwater supplies were not regulated, so they have not had a chance to recharge. The use of groundwater is also unsustainable, bringing with it a cascade of unintended consequences, such as wells drying up.

Beyond that, the environment will suffer as well. “Fish populations never recovered from the last drought, and extinctions are highly likely,” Mount said. While species like the Delta smelt are already functionally extinct, it is likely that those that rely on cold water to survive, like salmon and steelhead trout, will be hit hard this year.

Priya Arora was born and raised in the San Fernando Valley, and graduated from U.C. Irvine. They are currently a social media editor on the Audience team, and also write about South Asian pop culture for The Times.

It’s a property that offers a unique open floor plan—plus a hot tub with a view.“It was a Methodist church located in a historic little area of St. … END_OF_DOCUMENT_TOKEN_TO_BE_REPLACED