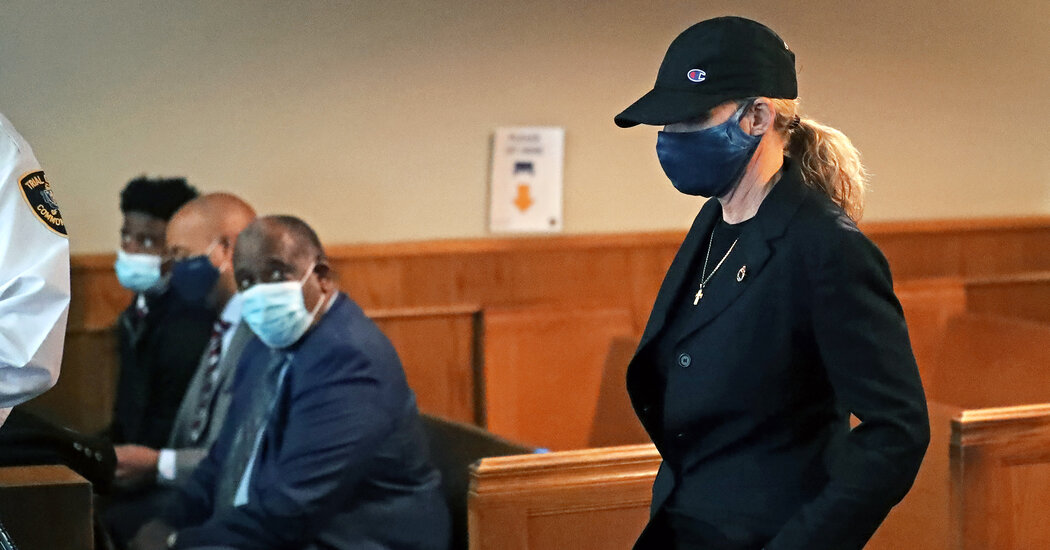 A white Massachusetts police officer will face criminal charges in connection with an off-duty episode in which she is accused of berating a Black teenager, a friend of her son, over his support of the Black Lives Matter movement, a court official ruled this week.

An assistant clerk with the Dedham District Court ruled on Thursday after a probable cause hearing that criminal charges against Patricia Lio, an officer with the Milton Police Department, could proceed.

The episode that prompted the charges occurred on Sept. 19, 2020, when Officer Lio’s son had invited two of his friends, one Black and one Hispanic, to his home in Westwood, Mass., to watch a Boston Celtics game and sleep over, The Boston Globe reported.

Officer Lio is accused of confronting the Black teenager, who is 14, about his stance on the Black Lives Matter movement, Alfred A. Gray Jr., a lawyer representing the teenager and his family, said in an interview. She is also facing allegations that she hit her husband when he tried to intervene in the situation, Mr. Gray said.

Officer Lio will faces charges of assault to intimidate and assault and battery on a household member, according to court records. She is set to be arraigned in late May.

The Westwood Police Department has been leading the investigation into the matter.

Officer Lio, who joined Milton’s police force nearly 20 years ago, has been on administrative leave since October, her lawyer, Douglas Louison, said. The department’s internal investigation into her matter is continuing, he said, adding that Thursday’s decision was “disappointing” for his client.

“This incident and the facts around it should just not have given rise to criminal charges,” he said.

In a statement, Deputy Chief James O’Neil of the Milton Police Department said that his department “is very concerned” about Officer Lio’s case.

“While the outcome of the criminal and internal cases is still unknown,’’ he said, “the Milton Police Department has zero tolerance for any bias behavior, domestic violence, or aggressive behavior towards children.”

Risa King, a Boston lawyer and the mother of the Black teenager, said in an interview that she had received a “troubling text followed by a phone call” from her son the evening of Sept. 19.

According to Mr. Gray, who is representing Ms. King and her family, Officer Lio had claimed the teenager had posted something negative toward police officers on social media. While the three boys were watching the Celtics game, Officer Lio went downstairs and eventually started berating the teenager about “his stance on Black Lives Matter and her beliefs that his stance on B.L.M. was inappropriate,” Mr. Gray said.

He said that the teenager, in fact, had not written the social media posts in question and “did not express any intent to engage in any violence toward police officers.”

According to testimony at a probable cause hearing on Tuesday, Officer Lio had asked the other teenager, who is Hispanic, if he believed in Black Lives Matter and also referred to him as an immigrant, Mr. Gray said.

But Mr. Louison, Officer Lio’s lawyer, said that although the officer had spoken to the Black teenager about some of the perceptions she felt Black Lives Matter projected onto police, race was “never a component.”

Ms. King called the aftermath of the episode involving her 14-year-old son “one of the worst, most difficult situations we have had to deal with as a family.”

“We just want to see the officer accountable for her outrageous behavior toward the kids,” she said.

AUSTIN, Texas--(BUSINESS WIRE)--As the first multifamily management company to be recognized in the Public Relations and Marketing Excellence Awards, … END_OF_DOCUMENT_TOKEN_TO_BE_REPLACED

There have been whispers of cooling housing and rental prices in the San Francisco Bay Area, but that hasn't yet translated into practical, noticeable … END_OF_DOCUMENT_TOKEN_TO_BE_REPLACED

Cars pass in Independence Square at twilight in Kyiv, Ukraine, Monday, Oct. 31, 2022. Rolling ... [+] blackouts are increasing across Ukraine as the … END_OF_DOCUMENT_TOKEN_TO_BE_REPLACED