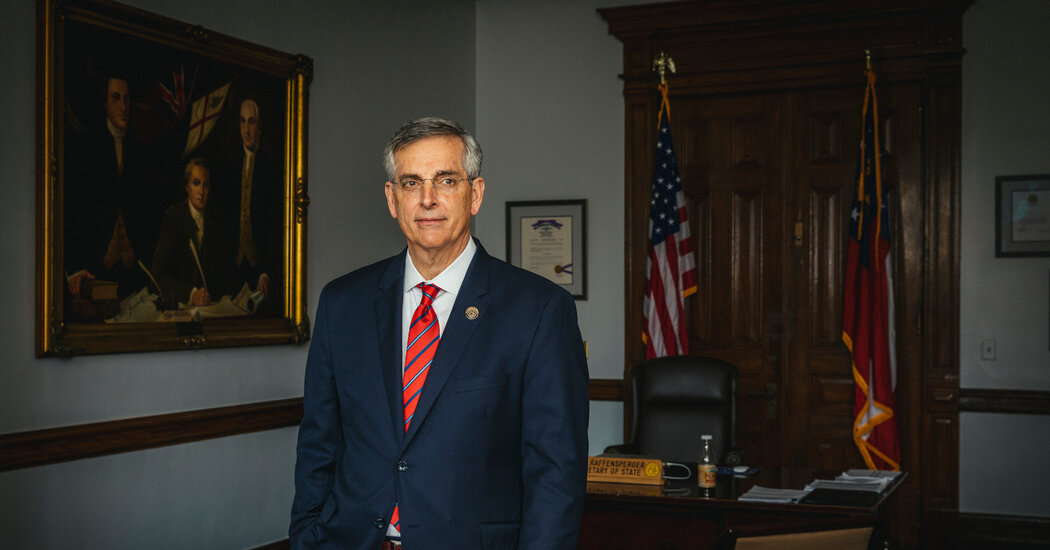 ATLANTA — The death threats finally appeared to be subsiding, Brad Raffensperger was happy to report.

“I haven’t gotten one in a while,” said Mr. Raffensperger, Georgia’s embattled secretary of state, expressing hope that political passions might be cooling off in the state — though “cooling off” is relative in the country’s most heated battleground.

Not since Florida’s presidential recount of 2000 has one state’s election cycle drawn so much national — even international — scrutiny. Polarizing figures, expensive campaigns and breathless plotlines have become a seemingly permanent feature of elections here. Analysts have identified Georgia as a major bellwether of the nation’s cultural, economic and demographic realignment, as well as a prime battlefield for showdowns over such fundamental civic matters as the right to vote.

When exactly did this reliably Republican and relatively sleepy political sphere become such a vital center of contention and intrigue?

roll back ballot access in what opponents say is clear targeting of Black voters with echoes of Jim Crow-era disenfranchisement.

In 2022, the Peach State’s race for governor is likely to include perhaps the Democratic Party’s leading champion of voting rights, Stacey Abrams, in a replay of the 2018 grudge match between her and Gov. Brian Kemp, the Republican incumbent. One of the two Democrats who won their races in January, Senator Raphael Warnock, will also have to turn around and defend his seat next year in a race that Republicans are already eyeing as they seek to reclaim the chamber. Several local and national Republicans — including Mr. Trump — have tried to recruit the former University of Georgia football legend Herschel Walker to run for the seat, which could lend another wrinkle to the state’s political story, as if it needed one.

Adding to the chaos, Mr. Kemp has become the target of a vendetta by Mr. Trump, who has condemned him for not doing more to deliver (or poach) victory for him in Georgia in November. This has also made Georgia the unquestioned center of the internal disputes that have roiled the Republican Party since November. Mr. Trump has seemed intent on making the state a key stop on a revenge tour he has waged against Republicans he has deemed insufficiently loyal to him — Mr. Kemp and Mr. Raffensperger chief among them.

disclosed by The Washington Post and led Georgia prosecutors to open a criminal investigation into the former president.)

“You’re not supposed to live and die by these elections,” Mr. Sterling said, noting that in a healthy democracy, the “normal” number of death threats directed at an official like him would be “zero.” He and Mr. Raffensperger were sitting in a tavern near the Georgia Capitol early this month, monitored by a security detail. They were unwinding after another day of pitched political battle in which the Republican-controlled legislature passed an election bill that would create a raft of new ballot restrictions.

a substantial influx of younger immigrants and transplants from more crowded and expensive cities in the Northeast and the West.

Likewise, the racial makeup has shifted rapidly. “Our demography is reflective of where many states are, and where the nation is headed,” said Ms. Abrams, who added that the majority of Georgia’s population was expected to be nonwhite by the end of this decade. “Politically, Georgia reflects what happens when all of these things come together. It’s a difficult thing to navigate on a national scale, and Georgia is the living embodiment of this.”

has received broad credit for helping capture the state’s electoral votes for Mr. Biden and the Senate seats for Democrats.

She became a voting rights cause célèbre herself in 2018 after enduring a bitter defeat in a governor’s race marred by accusations of voter suppression against Mr. Kemp in his former capacity as Georgia’s secretary of state. Ms. Abrams has to this day refused to concede defeat; Mr. Kemp, who oversaw the purging of hundreds of thousands of Georgians from the state’s voter rolls during his tenure, denied any wrongdoing. He declined to comment for this article.

Ms. Abrams said that Republicans could not match the political energy and the demographic momentum that have propelled Democrats in Georgia, other than to pursue laws that would make it harder for traditional Democratic constituencies, such as African-Americans, to vote.

The legislation currently making its way through the Capitol includes strict limits on weekend voting, a measure that could significantly impede the traditional role of Black churches in fostering civic engagement. A bill that passed the Georgia Senate early this month would repeal “no-excuse” absentee voting and require more stringent voter identification measures. The state’s political patriarch, the 96-year-old former President Jimmy Carter, said this past week that he was “disheartened, saddened and angry” about the legislation.

the civil rights pioneer and Georgia congressman John Lewis, became the first Jewish senator from the Deep South and entered the chamber with first Black senator to represent Georgia, Mr. Warnock. He now sits at a Senate desk that was once occupied by the fierce civil rights opponent Richard Russell and the staunch segregationist Herman Talmadge. In accordance with Senate tradition, both long-dead senators carved their initials in the desk, though Mr. Ossoff said he had yet to do that himself.

Republicans haltingly plan their next moves

Georgia Republicans say it would be shortsighted to think that legislation alone can stem the state’s recent tide of red to blue. Nor is it clear whether the most powerful motivating force in their party — Mr. Trump — has in fact motivated just as many voters to support Democrats in and around Atlanta.

This dynamic has extended to Trump acolytes like Representative Marjorie Taylor-Greene, the first-term Republican from the state’s northwest corner, whose far-right views, incendiary language and promotion of conspiracy theories have made her the biggest new attention magnet in Congress, for better or worse. “I have always subscribed to having a big tent,” Mr. Chambliss said. “By the same token, I don’t know where some of these people who wander into the tent ever come from.”

Former Senator Kelly Loeffler, the Republican businesswoman whom Mr. Kemp appointed to replace the retiring Johnny Isakson in late 2019, announced plans last month to start a voter registration group of her own, geared toward disengaged conservatives. Ms. Loeffler, who lost to Mr. Warnock, envisions the organization, Greater Georgia, as a Republican counterbalance to Ms. Abrams’s efforts.

Ms. Loeffler said she had committed a seven-figure sum of her own money to seed the effort. “When I stepped out of the Senate, I heard people say consistently that ‘someone needs to do something about Georgia,’” Ms. Loeffler said.

brief foray into elective politics began in January 2020, during Mr. Trump’s first Senate impeachment trial. She immediately began running for her November re-election, in a campaign that included Representative Doug Collins, a firebrand Republican and fierce defender of Mr. Trump who continually derided Ms. Loeffler as a “RINO” (Republican in name only) who was not adequately devoted to the former president. She then spent much of her brief Senate career trying to display her fealty to Mr. Trump — an effort that included a campaign ad literally portraying her as to the right of Attila the Hun.

Ms. Loeffler, 50, said she had no timetable for deciding whether she would run against Mr. Warnock in what would be a rematch for her old seat. As for what other Republicans might run, speculation has produced (as it does) a colorful wish list, from Ms. Greene to Mr. Walker. David Perdue, the former Republican senator who was defeated by Mr. Ossoff, said last month that he would not run in 2022, and Mr. Trump has been trying to enlist Mr. Collins to take on Mr. Kemp in a Republican primary bid.

Mr. Walker, the 1982 Heisman Trophy winner, signed his first professional football contract in the ’80s with Mr. Trump’s United States Football League team, the New Jersey Generals, and maintains a close friendship with his former boss. A native of Wrightsville, Ga., Mr. Walker is a Republican who has encouraged African-Americans to join the party, and he has not ruled himself out for 2022.

He is also unquestionably beloved in his home state, and the feeling appears to be mutual, though Mr. Walker currently lives in Texas.

Kevin McKenzie and Martine van Hamel were standing in the dining room of their weekend house in Woodstock, N.Y., trying to figure out when they got … END_OF_DOCUMENT_TOKEN_TO_BE_REPLACED