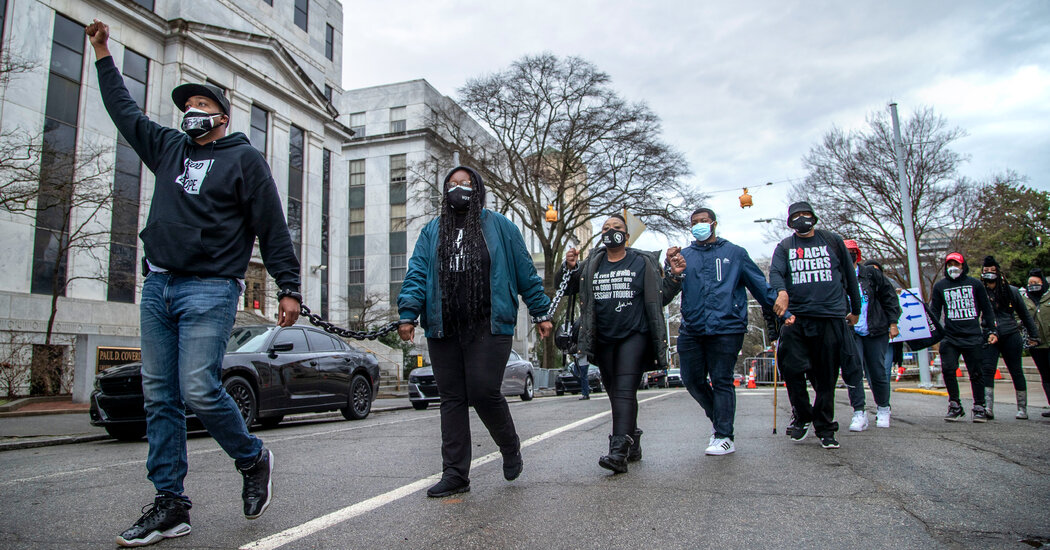 After record turnout flipped Georgia blue for the first time in decades, Republicans who control the state Legislature moved swiftly to put in place a raft of new restrictions on voting access, passing a new bill that was signed into law on Thursday.

The law will alter foundational elements of voting in Georgia, which supported President Biden in November and a pair of Democratic senators in January — narrow victories attributable in part to the turnout of Black voters and the array of voting options in the state.

Taken together, the new barriers will have an outsize impact on Black voters, who make up roughly one-third of the state’s population and vote overwhelmingly Democratic.

The Republican legislation will undermine pillars of voting access by limiting drop boxes for mail ballots, introducing more rigid voter identification requirements for absentee balloting and making it a crime to provide food or water to people waiting in line to vote. Long lines to vote are common in Black neighborhoods in Georgia’s cities, particularly Atlanta, where much of the state’s Democratic electorate lives.

Democrats say that Republicans are effectively returning to one of the ugliest tactics in the state’s history — oppressive laws aimed at disenfranchising voters.

“Rather than grappling with whether their ideology is causing them to fail, they are instead relying on what has worked in the past,” Stacey Abrams, the voting rights activist, said as the bill made its way through the Legislature, referring to what she said were laws designed to suppress votes. “Instead of winning new voters, you rig the system against their participation, and you steal the right to vote.”

multiple other states are lining up similar efforts, while the Supreme Court signaled this month that it was ready to make it harder to challenge all sorts of limits on voting around the nation.

Should the high court make changes to Section 2 of the Voting Rights Act, which allows after-the-fact challenges to voting restrictions that may disproportionately affect members of minority groups, Democrats and voting rights groups could be left without one of their most essential tools to challenge new laws.

For decades, Georgia has been at the center of the voting rights battle, with Democrats and advocacy groups fighting back against repeated efforts to disenfranchise Black voters in the state.

As recently as 2018, Georgians faced hourslong lines to vote in many predominantly Black neighborhoods, and thousands of Black voters were purged from the voting rolls before the election. Now Republicans have again changed the state’s voting laws ahead of critical Senate and governor’s races in 2022.

Democrats, shut out of power in the Statehouse despite holding both United States Senate seats, were relatively powerless in the legislative process to stop the voting bill, though they do now have avenues through the courts to challenge the law.

The initial iterations of the bill contained measures that voting rights groups said would have even more directly targeted Black voters, like a proposal to restrict early voting on the weekends that would limit the longstanding civic tradition of “Souls to the Polls,” in which Black voters cast ballots on Sunday after church services.

In an interview earlier this month, Ms. Abrams, the former Democratic minority leader in the Georgia House of Representatives, called Republicans’ effort “a sign of fear” over their failure to win support from young and minority voters, two of the fastest-growing sectors of the state’s electorate.

She added that the measure was also potentially self-defeating for the G.O.P. in that large percentages of rural white voters, a traditionally Republican-leaning bloc, could also be impeded by laws that make it harder for citizens to cast absentee ballots and vote by mail.

Republicans have defended the new measures, saying they are focused on election security. In remarks on Thursday after signing the new law, Gov. Brian Kemp said that after the 2020 election, “we quickly began working with the House and Senate on further reforms to make it easier to vote and harder to cheat.” He added, “The bill I signed into law does just that.”

GREENVILLE, N.C.--(BUSINESS WIRE)--Employers aiming to win the war on talent have a new “A” team to tap into: college and professional athletes. … END_OF_DOCUMENT_TOKEN_TO_BE_REPLACED

Mortgage rates are likely to rise in July, extending a seven-month streak. High inflation, and the Federal Reserve's efforts to control it, have … END_OF_DOCUMENT_TOKEN_TO_BE_REPLACED