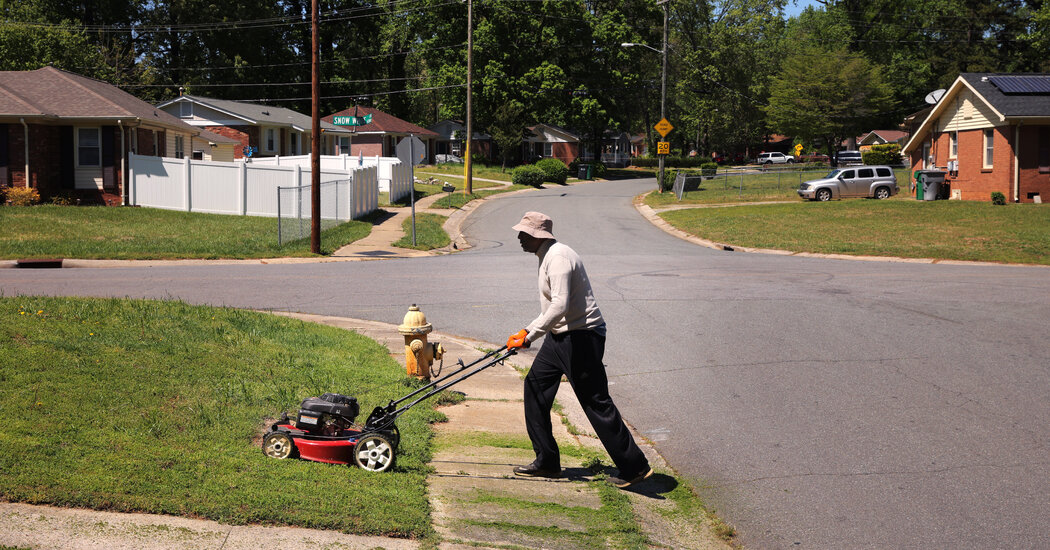 CHARLOTTE, N.C. — At her first meetings with clients, many hoping to buy a first home, Sarah Ortiz Hilton runs through a list of warnings.

They may have to offer tens of thousands of dollars over the asking price only to have those offers rejected anyway, Ms. Hilton, a real estate agent, tells them. They might have to put up thousands of dollars in nonrefundable fees to get a seller to consider their offer. And if they’re looking for a home for less than $300,000, they might be out of luck.

In part, her cautionary message reflects the red-hot housing market, rising interest rates and limited supply around the country. But particularly in booming Sun Belt markets like Charlotte, it also reflects something else: the increasing influence of real estate investors buying up houses, especially at the lower end of the market, and turning them into rental properties.

In cities like Charlotte, that trend is exacerbating the shortage of houses for sale, driving up prices and putting homeownership out of reach for many first-time buyers, the biggest losers in today’s market.

93 percent of homes purchased by corporations as of May 2021 were bought for under $300,000. Many of them were in predominantly Black neighborhoods.

purchased more than 30 percent of the homes sold in the fourth quarter of 2021, according to Redfin. In Jacksonville, Fla., Las Vegas, and Phoenix, they bought just under 30 percent.

Housing industry representatives note that these numbers, which define investors as any institution or business, represent purchases by smaller, local owners, too, who may own just one or two buildings through a limited liability company.

For decades, Marjorie Parker knew all of her neighbors in the east Charlotte neighborhood of Hidden Valley. Living there wasn’t always easy, as gang violence periodically rattled the streets. But Ms. Parker found comfort in the strength of the community and the economically stable, middle-class life it afforded Black families.

The first change she noticed was the fliers outside her door. They offered to buy her home for cash. Soon her phone began ringing multiple times a day with calls offering the same.

raise rents, evict their tenants and poorly maintain their properties than smaller landlords. One by the Department of Housing and Urban Development in 2018 found that large corporate owners in Atlanta were 68 percent more likely than smaller owners to file eviction notices.

Facing a steady encroachment of corporate buyers, some neighborhoods are fighting to stave them off.

Just north of Ms. Parker’s neighborhood, residents in the townhome community of Avalon at Mallard Creek watched as companies quickly snatched up homes for sale and converted them to rentals. By last year, over 40 percent of the homes there were occupied by renters, according to Keri Miller, the homeowners association treasurer.

The association, frustrated at what it said was poor maintenance of the renter-occupied homes, took a vote on a leasing amendment that would require anyone buying a home in the community to live in the unit for at least a year before renting it out.

The amendment passed, and by this past February, the percentage of renters had dropped by 10 percent, Ms. Miller said.

Industry officials criticize these efforts as discriminatory toward renters.

“Why should a young family who is not in a position to buy a home for whatever reason be prevented from living in a neighborhood that is close to schools, close to jobs and other neighborhood amenities?” Mr. Howard said.

Demand for rental homes is high, and “the companies are coming in and trying to satisfy that demand,” he said. He added that companies are also addressing the supply shortage by building new rental home communities from scratch.

But critics say that renting a single-family home comes with far less opportunity for long-term stability and building wealth than owning one. And the typical starting rent of about $1,500 in the area is hardly helping meet the needs of renters at the lower end of the market.

Jameisha Wilkes spent months searching for a home that would keep her close to her daughter’s therapy for autism, her job at a food services warehouse and her mother’s house in the same subdivision.

For sale signs were popping up outside the modest homes in her subdivision in the northeast suburbs of Charlotte. With the help of a down payment assistance program and financing for a mortgage up to $180,000, she thought maybe she would have a shot.

But when she searched for the homes on Zillow, she was shocked to find that many houses in her neighborhood were selling for more than $300,000, double what some had been sold for just about five years before. Occasionally she would find something in another neighborhood closer to her price range, but it would be gone quickly.

“If there’s a house that’s affordable, it’s already gone within 24 hours,” Ms. Wilkes said. “Most times I don’t even get to make it to the open house before there’s already an offer in.”

Now Ms. Wilkes is busy packing her belongings, but not to move to her own house. After her landlord, Tricon Residential, which now owns more than 1,600 single-family homes across Mecklenburg County, offered to renew her lease for $150 more a month, she decided to move with her daughter into a small one-bedroom apartment nearby while she saves money to buy.

Local officials are exploring ways to give people like Ms. Wilkes a fighting chance at homeownership, like buying land and offering it for below market value, and creating legislation to add barriers to corporate ownership. But no specific policies have been proposed.

Efforts to curtail the spread of corporate homeownership are slow going at the federal level, too. A Senate bill that would close legal, tax and regulatory loopholes “that allow private equity firms to capture all the rewards of their investments while insulating themselves from risk” has sat in committee since Senators Elizabeth Warren of Massachusetts, Sherrod Brown of Ohio and others introduced it in October.

In the meantime, many home buyers feel like their last hope is a stroke of luck.

On her route as a mail carrier, Ashlee Floyd would take photos of for sale signs to search for the listings on breaks, only to find one after another listed for outside her $300,000 budget. Offers she made on five houses were rejected.

Ms. Floyd scrimped for a higher down payment — cutting back on Christmas gifts and extracurricular activities for her two children — and picked up as much overtime as she could, often working 65 hour weeks.

Two years after she began her search, she found a home she could afford in a quiet subdivision in northwest Charlotte and an owner who was committed to selling to a family, not a company. Last week, she closed, paying $292,000, $27,000 over the asking price.

“It’s over, the nightmare is over,” Ms. Floyd said. “We just have a foundation now. This is where we’re going to plant our seed and grow from here. That’s how it feels.”

When the water slipped in, it was just a glimmer on the floor, a sign that it was time to go.It was Wednesday, around noon, and Darcy Bishop roused … END_OF_DOCUMENT_TOKEN_TO_BE_REPLACED

The union movement that kicked off across the country more than a year ago has continued its momentum in 2022, with workers in warehouses, coffee … END_OF_DOCUMENT_TOKEN_TO_BE_REPLACED