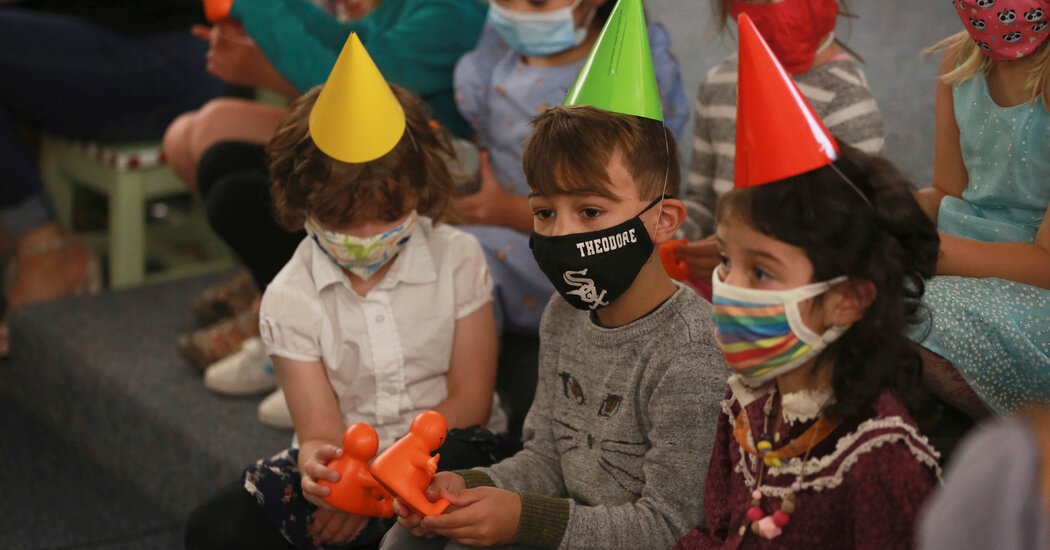 In New Mexico, child care workers got pay raises. In Iowa, 16-year-olds can now supervise 15 children. In Montana, caregivers can watch more toddlers at a time.

With sweeping federal child care legislation stalled in Congress, dozens of states have stepped in to address a growing crisis, as many families have found services both unaffordable and scarce.

Treasury Secretary Janet Yellen has called the situation “a textbook example of a broken market.”

State legislatures, often using federal stimulus money, enacted more than 200 child-care bills in 2021, and another 100 bills were passed in the first half of 2022 — a rate of lawmaking that is twice the average of recent years, according to the National Conference of State Legislatures.

have returned to the work force, contributing to labor shortages in some industries.

In the United States, most families receive little government help with care before children enter kindergarten. Two-thirds of mothers of children under 6, and 94 percent of fathers of that age group, are working for pay, according to federal data. Yet child care is unaffordable for more than 60 percent of families who need it, according to the Treasury Department, and half of all Americans live in places where child care is in short supply.

considering bills that would create 1,000 new seats in infant and toddler programs and centralize the state’s child-care system, which is currently regulated by a number of departments and agencies.

President Biden’s Build Back Better Act would have created a national child-care entitlement, capping costs at 7 percent of most families’ incomes. But the bill sputtered, largely because of opposition from Republicans and Senator Joe Manchin, Democrat of West Virginia, who was concerned about the cost of the legislation and about some provisions, like child tax credits, that he thought would discourage parents from working.

child-care package, funded with federal support. That provision will allow grandparents and other informal caregivers — a significant source of care — to sign-up for training in early education, and then get money to upgrade their homes for safety and education.

“In a world where it is difficult for a family to survive on a single source of income, child care is a critical need,” said Jerry Sonnenberg, a Republican state senator. “Child care issues are not partisan.”

about $11 an hour on average in Montana, and are being lured away by jobs in retail.

Using federal stimulus funds, Montana has capped child-care costs for low-income families at $10 a month. But the federal support will disappear by the end of 2024, and Senator Bogner predicted that state lawmakers were more likely to loosen regulations than they were to provide more funds.

He argued that stimulus money had artificially heated up the child-care market — though affordability and supply problems predated the pandemic. He acknowledged that many workers in his district cannot afford market-rate child care, and said families must “make some serious choices on whether they want to have children or not.”

In Iowa, Gov. Kim Reynolds, a Republican, signed a bill on Thursday, over Democratic opposition, that raises the number of children a single adult is allowed to supervise at a child-care center. There can now be seven 2-year olds per adult instead of six — exceeding national recommendations — and 10 3-year olds instead of eight. The measure also allows 16-year-olds to provide care without adult supervision for up to 15 children over the age of 5.

Liberal states have tended to take a different, sometimes much more expensive route. This fall, voters in New Mexico will consider an amendment to the state constitution that would earmark a percentage of state oil and gas revenue for early childhood education, which would provide $127 million a year.

The amendment could allow New Mexico to continue an unusually generous program: Gov. Michelle Lujan Grisham, a Democrat, has made child care free through the summer of 2023 for many families earning less than 400 percent of the federal poverty level, or about $111,000 for a family of four.

Ivydel Natachu, 52, is one early childhood educator in Albuquerque who says she would benefit. She has 17 years of experience, was earning $10.50 an hour until 2020. She raised her own children with help from side jobs and food stamps.

With temporary federal stimulus funding propping up New Mexico’s child-care centers, she now earns $15 an hour; if the constitutional amendment passes, it could raise her pay to $18 an hour.

Ms. Natachu said that during the pandemic, she saw colleagues quit after just a few weeks on the job, lured away by easier, higher-paid jobs in other fields. She said that given their expertise in child development, child-care workers ought to be paid like public-school teachers.

“We are fighting for our professional wages,” she said.

DALLAS — The rollback of abortion rights has been received by many American women with a sense of shock and fear, and warnings about an ominous … END_OF_DOCUMENT_TOKEN_TO_BE_REPLACED

The poshest place in California's Coachella Valley is The Madison Club. This exclusive gated community in La Quinta is where A-listers and tycoons … END_OF_DOCUMENT_TOKEN_TO_BE_REPLACED