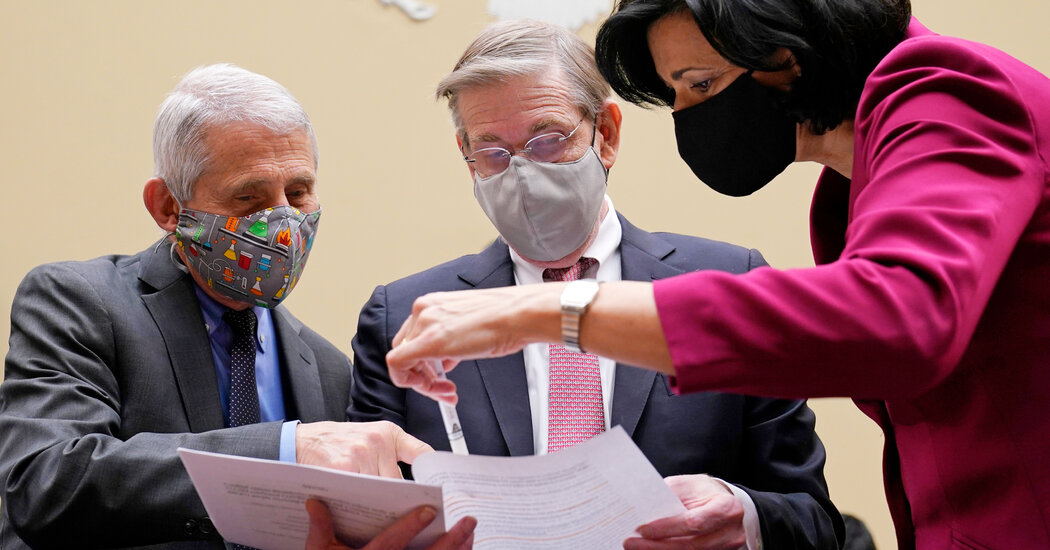 WASHINGTON — Federal health officials appear to be leaning toward lifting their recommended pause on the use of Johnson & Johnson’s coronavirus vaccine after finding only a limited number of additional cases of a rare blood clotting disorder among recipients.

Instead, the Food and Drug Administration is likely to attach a warning to the vaccine’s label to inform health practitioners — and the public — about the exceedingly uncommon, but dangerous possible side effect.

Federal health officials are waiting to act until they hear from a committee of outside experts who advise the C.D.C. The committee is scheduled to meet on Friday to discuss whether to recommend lifting, extending or modifying the pause that was initiated on April 13.

manufacturing hurdles at a Baltimore plant that regulators have refused so far to certify. That plant was supposed to deliver the bulk of the nearly 100 million doses the firm had promised to have ready by the end of May.

But it would mean a temporary surge of about 10 million shots that were effectively put on hold when the pause was announced. Some state officials had been planned to use the one-dose, easily stored vaccine to inoculate college students before the summer or for other transient or hard-to-reach populations, but had to abruptly shelve those plans.

Dr. Rochelle P. Walensky, the C.D.C. director, said in an interview on Wednesday that federal officials had found “needles in haystacks,” an indication of how thorough the government’s oversight was. “We would like to make a decision quickly after ACIP,” she said, using the acronym for the expert panel called the Advisory Committee on Immunization Practices. “America and the world are interested in moving forward.”

recommended earlier this week that the vaccine’s rollout continue as long as a warning is added to the product about the risks of the blood clotting disorder. If American officials follow suit, they will be reverting to a precaution that they considered early on.

In the days before the pause was initiated, F.D.A. officials had drafted a brief warning about possible rare blood clots to attach to the section of the vaccine’s emergency use authorization describing possible side effects.

early polling about the pause suggested that Americans saw the move as a sign that the government was responsibly monitoring the vaccines, while one released by Boston Children’s Hospital showed that Americans who want to get vaccinated are now significantly less willing to get the Johnson & Johnson shot.

“It took only six cases to do this,” said Dr. Joseph Kanter, the top health official in Louisiana, where other vaccines had to be substituted for Johnson & Johnson’s at homeless vaccination events in New Orleans, faith organization vaccine drives and on college campuses. “Anyone who has questions or concerns about how serious safety is taken should look at this as an example that safety is paramount.”

He said that rescheduling appointments had been a “surmountable challenge,” and that the pause meant state officials would just “have to work a little bit harder to get people back.”

Dr. Kanter and other state officials have been surprised by the shot’s popularity with people eager for a single-dose vaccine and are eager to use it as demand for vaccinations may flatline.

“We’re clearly at the stage now when we have more than enough vaccine. The demand is clearly not as much as the supply at this point,” said Dr. José R. Romero, Arkansas’ top health official and head of the C.D.C. vaccine advisory panel. “This vaccine would help get those persons on the borderline.”

ROSWELL, Ga.--(BUSINESS WIRE)--Berkshire Hathaway HomeServices Georgia Properties, one of the largest and most successful real estate organizations in … END_OF_DOCUMENT_TOKEN_TO_BE_REPLACED

The real estate market seems to have a split personality.On the positive side for homebuyers, the number of properties for sale shot up by a … END_OF_DOCUMENT_TOKEN_TO_BE_REPLACED

Kim Tae-Ri plays a gun-toting time traveler in 'Alienoid.' Well Go USA Director Choi Dong-hoon likes a challenge. That much is apparent in his latest … END_OF_DOCUMENT_TOKEN_TO_BE_REPLACED