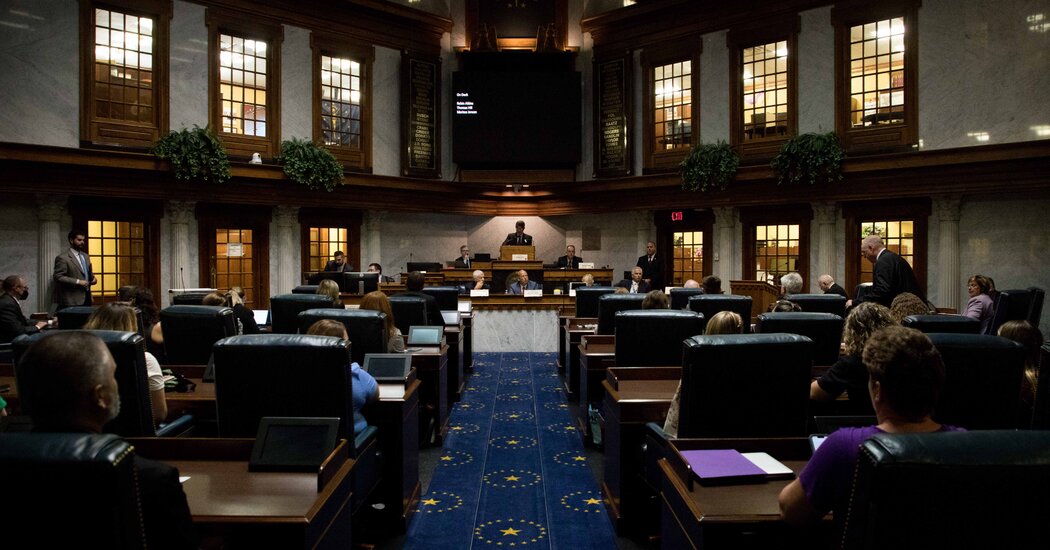 INDIANAPOLIS — Abortion opponents, especially in conservative states, had hoped to swiftly pass a new wave of restrictions after Roe v. Wade was overturned. But so far, most Republican lawmakers have moved cautiously or done nothing at all, even in statehouses where they hold overwhelming majorities.

A debate playing out in Indiana this week is showing why.

Though Republican legislators support the broad idea of restricting abortion, they have clashing views on how far to go. Should there be an outright ban? If so, should there be exceptions for rape and incest? And what if a woman’s health is threatened by a pregnancy but doctors do not believe she will die?

“Those are all questions that are really difficult,” said State Senator Rodric Bray, an Indiana Republican whose caucus, which has long worked to limit abortions, has divided over a bill that would ban abortion with some exceptions. Before Roe was overturned this year, Mr. Bray said, lawmakers had not “spent enough time on those issues, because you knew it was an issue you didn’t have to really get into the granular level in. But we’re now there, and we’re recognizing that this is pretty hard work.”

trigger bans on abortion years ago, when it remained a federal right, Republicans weighing the issue today are not governing in hypotheticals. They are contending with thorny questions about exceptions, nuanced disagreements within their own party and mixed public opinion during an election season in which abortion has become a defining issue. Recent high-profile cases, like that of a 10-year-old sexual assault victim from Ohio who traveled to Indiana to get an abortion because of new restrictions in her home state, have made clear the stakes of the debate.

Leaders in many Republican-led states seem to be biding their time. An exception has been West Virginia, where lawmakers advanced a near-total ban this week after a court blocked enforcement of an 1849 abortion ban in that state.

But in Nebraska, where an effort to pass a trigger ban narrowly failed early this year, Gov. Pete Ricketts has discussed the possibility of a special session but has yet to call one. In Florida, Gov. Ron DeSantis has largely avoided questions about whether he would take immediate steps to pass new restrictions. In South Dakota, where a ban went into effect after Roe was struck down, Gov. Kristi Noem backed away from an initial pledge to call lawmakers to the Capitol to consider more abortion bills. And in Iowa, Gov. Kim Reynolds has said she was focused on getting the courts to allow for enforcement of existing restrictions that had been blocked.

“cruel, dangerous bill,” but also Indiana Right to Life, which described it as “weak and troubling.”

“This particular legislation, probably the best analogy I can say is Swiss cheese — there’s so many holes,” said Jodi Smith, who spoke on behalf of Indiana Right to Life, and who noted during testimony before lawmakers this week that several Senate Republicans had sought that group’s endorsement.

said he wanted abortion to remain legal during the first trimester of pregnancy. And many in the party have raised questions about whether and how to include exceptions for rape, incest and a pregnant woman’s health.

During marathon public comment sessions, several women told lawmakers to continue allowing access to abortions, sharing personal stories, and several doctors spoke against the bill, warning that it would have dire consequences for Indiana women. Abortion is currently legal in Indiana up until 22 weeks of pregnancy.

“Bans on abortion pose a threat to the health and well-being of Indiana youth,” Dr. Mary Ott, a pediatrician, said during her testimony. She added, “The proposed legislation politicizes what should be a private decision.”

Some anti-abortion activists spoke of a sense of betrayal that lawmakers who campaigned as abortion opponents were stopping short of a full ban. One man said, “Let’s not find a compromise”; another called the measure “a fraud masquerading as a pro-life bill”; and a third said there was no excuse not to pass a more restrictive law because “there’s a supermajority of supposedly pro-life Republican legislators here.”

Some hinted at electoral consequences for inaction.

“If the language of this bill isn’t changed, innocent children will die, God’s wrath will continue to be stored up against this state and the Republican Party will lose many of its God-fearing constituents,” Seth Leeman, the pastor of a Baptist church in Noblesville, an Indianapolis suburb, told lawmakers.

Even amid the intraparty squabbling, it remains very possible that Indiana will enact a near-total ban on abortion during its special session, which is expected to continue next week.

Some Republicans elsewhere are also moving ahead. In South Carolina, a special panel of lawmakers recently drafted a bill that would enact something close to a total ban on abortion in the state, though it could be months before it comes up for a final vote.

But even in conservative states where new restrictions do not immediately pass, Republicans have time on their side.

In Indiana, if legislators are unable to pass new restrictions in the next few weeks, they could try again during a new legislative session in 2023, some Republicans are already suggesting. Democrats are taking them at their word.

“I have concerns that if the bill dies, that Hoosiers might think that access to abortion care is safe — and I want people to know, no, it’s not safe,” said State Senator Shelli Yoder, a Democrat from the college town of Bloomington. “What they learned from this experience, they will come back in January, and they won’t fail again.”

Asbestos in the home can be downright scary. This extremely dangerous material has been linked to all kinds of health problems, including … END_OF_DOCUMENT_TOKEN_TO_BE_REPLACED

ATLANTA — Before the three men convicted of murdering Ahmaud Arbery were sentenced on Monday on federal hate crime charges, they asked a judge to … END_OF_DOCUMENT_TOKEN_TO_BE_REPLACED