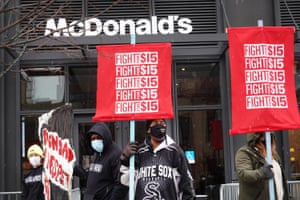 For Terrence Wise, a McDonald’s employee from Kansas City, Missouri, the battle for a raise in the federal minimum wage is far from over.

Joe Biden campaigned on a raise, the first since 2009, and the majority of Americans of both parties support an increase. And yet, last month, Congress blocked an increase from the paltry $7.25 an hour where it has been stuck since 2009. Now there are signs of new momentum for change.

If Washington can’t find a solution, Wise had a warning for politicians of both sides. “If you’re not going to make $15 a reality for workers, if you’re not going to create an environment for workers to join a union and make that possible, you will not be re-elected. You will not have your seat again,” Wise said, an organizer with the Fight for $15 movement. “We will not continue to choose representatives who are truly not representing us or who are out of tune with the working class.

High hopes that the federal minimum wage would be lifted for the first time in over 10 years came with the introduction of Biden’s $1.9tn stimulus package. The wage hike, which Biden tucked into his original stimulus plan, would have been the largest victory for the Fight for $15 movement since it started to mobilize fast-food workers in 2012.

But when the bill hit the Senate, the wage increase faced two major hurdles: moderate Democrats who said that $15 was just too high and a ruling from the Senate’s parliamentarian on whether including an increase in the spending bill would break Senate rules.

Ultimately, both factors stopped the increase from going into law.

While Congress’s failure to raise the minimum wage dealt a blow to the Fight for $15 movement, advocates say there is still enough momentum behind the issue to build pressure on lawmakers in DC to bring a $15 minimum wage back to the table. Activists also say the Democratic party risks losing the support of some of its base if a new minimum wage fails to pass.

“It’s such a core priority for so many organizations, for so many people, so many of the voters that put a lot of these elected officials into office,” said Tsedeye Gebreselassie, director of work quality at the National Employment Law Project. “It’s the top economic policy priority this year.”

Multiple polls have shown there is broad support for a $15 minimum wage. One Pew Research poll from 2019 found that 67% of Americans support a minimum wage increase. An Amazon/Ipsos poll released this month found approximately the same percentage of support.

In recent weeks, the White House and Democrats in Congress have said they will continue to push the issue forward, though how the party plans to get legislation through the Senate remains unclear. Ron Klain, Biden’s chief of staff, told MSNBC on 14 March “we’re in the fight for $15”.

Reports have indicated that Democratic senators who pushed for the $15 minimum wage are meeting with their colleagues who voted against it to talk about next steps to increase the minimum wage.

All Republicans and eight Democrats voted against the inclusion of the wage increase in the stimulus bill. Most of the Democratic senators who voted against it voiced concerns over the rushed way the raise was being passed and its potential impact on small businesses and restaurants, but indicated they were open to some kind of increase.

One Democratic senator, Joe Manchin, who is considered the most conservative Senate Democrat, was the star holdout during the minimum wage debate. Manchin said that he supports an increase that is “responsible and reasonable”, citing an $11 figure as something he would support.

In addition to getting all party senators on the same page, Democrats will either have to overrule the Senate parliamentarian, who in February ruled that a wage increase cannot be included in a bill passed with a simple majority, or get support from at least 10 Republican senators to pass the bill.

Support to overrule the parliamentarian as the stimulus bill went through Congress was weak, with Biden saying that he was “disappointed” in the decision but that he would “respect” it.

Another way to bypass the parliamentarian’s ruling would be if Democrats agree to do away with the filibuster, which would allow them to pass legislation with a simple majority. Legislation protecting voting rights has recently shed a more prominent spotlight on the debate over the filibuster, though some Democrats have voiced hesitancy over getting rid of the procedure.

Meanwhile, some moderate Republicans have come out with minimum wage increase plans of their own, showing that there is some support for an increase as the party tries to appeal to more working-class voters, though they are scaled back compared to what progressive Democrats want.

Though it appears compromise could be made on an increased minimum wage that is lower than $15, progressive Democrats and advocates for a $15 minimum wage are refusing to budge to anything below that.

‘We need $15’: US minimum wage ruling a personal blow for millions of workers

Progressive House Democrats, in an attempt to pressure their colleagues in the Senate to take on a $15 wage, have started to renew demands for legislation. On a recent call with the press, a dozen House Democrats, labor leaders and activists demanded that a $15 wage increase be passed by the end of the year.

Representative Ro Khanna, who organized the call, said that Democrats can include the increase in must-pass legislation, such as the annual defense spending bill. Khanna, along with other progressive Democrats, have also advocated for overturning the parliamentarian to raise the minimum wage to $15 if it comes to it.

Khanna said the number of groups on the call demonstrates the widespread support for a $15 minimum wage in the Democratic party.

“There could be real disappointment if we don’t get it this time,” Khanna said. “The Democratic party is unified around this in the House, among groups and, candidly, [among] the people who helped us win the election.”

Tribune Publishing said on Monday that it had ended talks to sell itself to Newslight, a company set up last month by the Maryland hotel executive … END_OF_DOCUMENT_TOKEN_TO_BE_REPLACED

HOUSTON — Under growing pressure from investors to address climate change, Exxon Mobil on Monday proposed a $100 billion project to capture the carbon … END_OF_DOCUMENT_TOKEN_TO_BE_REPLACED