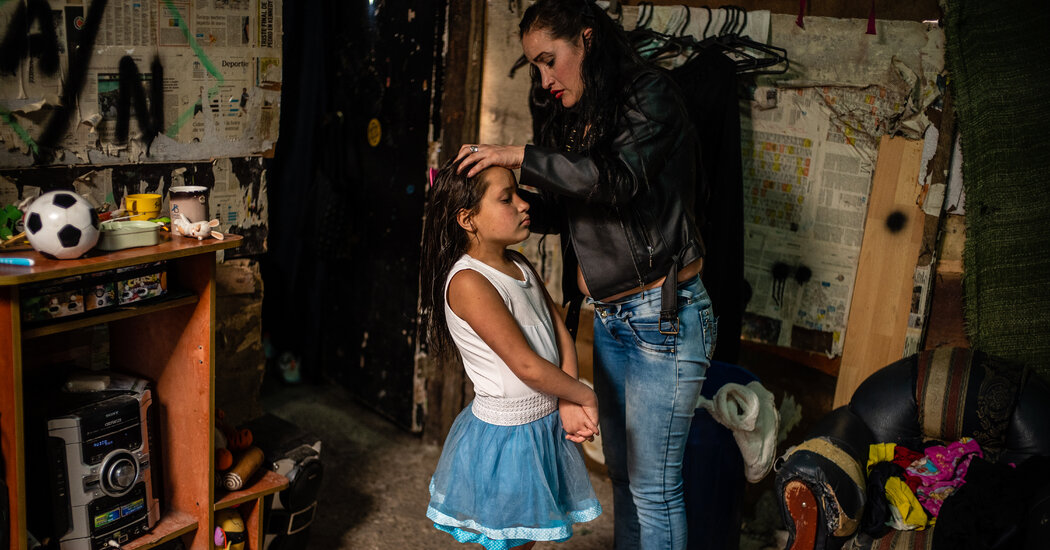 SOACHA, Colombia — Already, two of Gloria Vásquez’s children had dropped out of school during the pandemic, including her 8-year-old, Ximena, who had fallen so far behind that she struggled with the most basic arithmetic.

“One plus one?” Ms. Vásquez quizzed her daughter one afternoon.

Now, Ms. Vásquez, a 33-year-old single mother and motel housekeeper who had never made it past the fifth grade, told herself she couldn’t let a third child leave school.

“Where’s Maicol?” she asked her children, calling home one night during another long shift scrubbing floors. “Is he studying?”

have returned to the classroom, 100 million children in Latin America are still in full or partial distance learning — or, as in Maicol’s case, some distant approximation of it.

The consequences are alarming, officials and education experts say: With economies in the region pummeled by the pandemic and connections to the classroom so badly frayed, children in primary and secondary school are dropping out in large numbers, sometimes to work wherever they can.

1.8 million children and young people abandoned their educations this school year because of the pandemic or economic hardship, according to the national statistics agency.

Ecuador lost an estimated 90,000 primary and secondary school students. Peru says it lost 170,000. And officials worry that the real losses are far higher because countless children, like Maicol, are technically still enrolled but struggling to hang on. More than five million children in Brazil have had no access to education during the pandemic, a level not seen in more than 20 years, Unicef says.

Increased access to education was one of the great accomplishments of the last half century in Latin America, with enrollment soaring for girls, poor students and members of ethnic and racial minorities, lifting many toward the middle class. Now, an onslaught of dropouts threatens to peel back years of hard-won progress, sharpening inequality and possibly shaping the region for decades to come.

some of the world’s worst outbreaks, yet several South American nations are now experiencing their highest daily death tolls of the crisis, even after more than a year of relentless loss. For some governments, there is little end in sight.

But unless lockdowns end and students get back into the classroom soon, “many children may never return,” the World Bank warns. And “those who do go back to school will have lost months or even years of education.” Some analysts fear the region could be facing a generation of lost children, not unlike places that suffer years of war.

Even before the pandemic, graduating from high school in Ms. Vásquez’s neighborhood was no small feat.

She and her children live at the end of a dirt road, just beyond Bogotá, Colombia’s sprawling, mountain-flanked capital, a deeply unequal city in one of the most unequal regions in the world. Violence and crime are as common here as the ice cream cart that circles the block each afternoon. For some children, the pandemic has been yet another trauma in a seemingly endless succession.

Many parents in the neighborhood make their living as recyclers, traversing the city with wooden wheelbarrows hitched to their backs. And many of their children don’t have computers, internet or family members who can help with class work. Often there is one cellphone for the family, leaving students scrambling for any connection to school.

Ms. Vásquez dropped out at 14 to help raise her siblings, and it has been her greatest regret. The motel she cleans is far from home, sometimes forcing her to leave her children for more than a day — 24 hours for her shift, with at least four hours of commuting. Even so, she rarely makes the country’s monthly minimum wage.

She had hoped her children — Ximena, 8, Emanuel, 12, Maicol, 13, and Karen, 15 — whom she calls “the motor of my life,” would leave the neighborhood, if only they could get through this never-ending pandemic with their schooling intact.

“I’ve always said that we have been dealt a difficult hand,” but “they have a lot of desire to learn,” she said.

Before the virus arrived, her children attended public schools nearby, wearing the colorful uniforms typical for Colombian pupils. Karen wanted to be a doctor. Maicol, a performer. Emanuel, a police officer. Ximena was still deciding.

By late May, the two boys were still officially enrolled in school, but barely keeping up, trying to fill out the work sheets their teachers sent via WhatsApp each week. They have no computer, and it costs Ms. Vásquez 15 cents a page to print the assignments, some of which are dozens of pages long. Sometimes, she has the money. Sometimes not.

Both girls had dropped out altogether. Ximena lost her spot at school just before the pandemic last year because she had missed classes, a not-so uncommon occurrence in Colombia’s overburdened schools. Then, with administrators working from home, Ms. Vásquez said she couldn’t figure out how to get her daughter back in.

Karen said she had lost contact with her instructors when the country went into lockdown in March 2020. Now, she wanted to return, but her family had accidentally broken a tablet lent to her by the school. She was terrified that if she tried to re-enroll, she would be hit with a fine her mother had no money to pay.

The family was already reeling because Ms. Vásquez’s hours at the motel had been cut during the crisis. Now they were four months behind on rent.

Ms. Vásquez was particularly worried about Maicol, who struggled to make sense of work sheets about periodic tables and literary devices, each day more frustrating than the last.

Lately, when he wasn’t recycling, he’d go looking for scrap metal to sell. To him, the nights out with his uncle were a welcome reprieve, like a pirate’s adventure: meeting new people, searching for treasure — toys, shoes, food, money.

But Ms. Vásquez, who had forbidden these jaunts, grew incensed when she heard he was working. The more time Maicol spent with the recycling cart, she feared, the smaller his world would become.

She respected the people who gathered trash for a living. She’d done it when she was pregnant with Emanuel. But she didn’t want Maicol to be satisfied with that life. During her shifts at the motel, cleaning bathrooms, she imagined her children in the future, sitting behind computers, running businesses.

“‘Look,’ people would say, ‘those are Gloria’s kids,’” she said. “They don’t have to bear the same destiny as their mother.”

Over the last year, school began in earnest only after she came home from work. One afternoon, she pulled out a study guide from Emanuel’s teacher, and began dictating a spelling and grammar exercise.

“There was a white and gray duck —”

When it came to Maicol’s more advanced lessons, Ms. Vásquez was often lost herself. She didn’t know how to use email, much less calculate the area of a square or teach her son about planetary rotations.

“I try to help them with what I understand,” she said. “It’s not enough.”

Lately, she’d become consumed by the question of how her children would catch up when — or if? — they ever returned to class.

The full educational toll of the pandemic will not be known until governments bring children back to school, experts warn. Ms. Di Gropello, of the World Bank, said she feared that many more children, especially poorer ones without computers or internet connections, would abandon their educations once they realize how far behind they’ve fallen.

By mid-June, Colombia’s education ministry announced that all schools would return to in-person courses after a July vacation. Though the country is enduring a record number of daily deaths from the virus, officials have determined that the cost of staying closed is too great.

But as school principals scramble to prepare for the return, some wonder how many students and teachers will show up. At Carlos Albán Holguín, one of the schools in Ms. Vásquez’s neighborhood, the principal said some instructors were so afraid of infection that they had refused to come to the school to pick up the completed assignments their pupils had dropped off.

One recent morning, Karen woke before dawn, as she often does, to help her mother get ready for her shift at the motel. Since leaving school last year, Karen had increasingly taken on the role of parent, cooking and cleaning for the family, and trying to protect her siblings while their mother was at work.

At one point, the responsibility got to be so much that Karen ran away. Her flight lasted just a few hours, until Ms. Vásquez found her.

“I told my mother that she had to support me more,” Karen said. “That she couldn’t leave me alone, that I was an adolescent and I needed her help.”

In their shared bedroom, while Ms. Vásquez applied makeup, Karen packed her mother’s blue backpack, slipping in pink Crocs, a fanny pack, headphones and a change of clothes.

Ms. Vásquez had gone out to march one day, too, blowing a plastic horn in the crowd and calling on the authorities to guarantee what she called a “dignified education.”

But she hadn’t returned to the streets. If something happened to her at the marches, who would support her children?

“Do you want me to braid your hair?” Karen asked her mother.

At the door, she kissed Ms. Vásquez goodbye.

Then, after months of hardship, came a victory.

Ms. Vásquez received messages from Maicol’s and Emanuel’s teachers: Both schools would bring students back, in person, in just a few weeks. And she finally found a spot for Ximena, who had been out of school entirely for more than a year.

Karen’s future was less certain. She had worked up the courage to return the broken tablet. Administrators did not fine her — and she applied to a new school.

Now, she was waiting to hear if there was space for her, trying to push away the worry that her education was over.

“I’ve been told that education is everything, and without education there is nothing,” she said. “And, well, it’s true — I’ve seen it with my own eyes.”

Helene Thiesen was one of 22 Inuiit children separated from their families in Greenland 70 years ago. Editor’s note: This story is part of CNN’s … END_OF_DOCUMENT_TOKEN_TO_BE_REPLACED