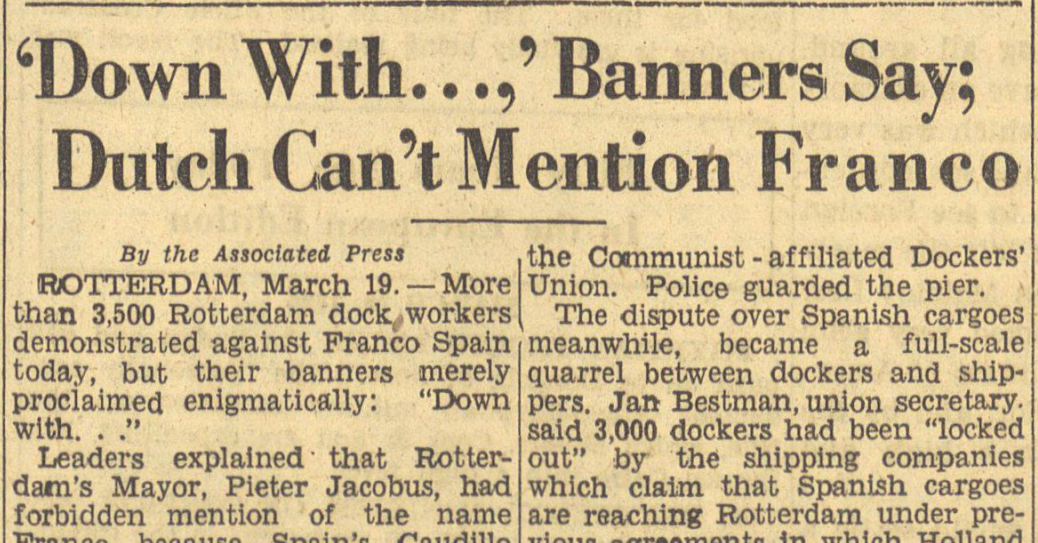 ROTTERDAM, March 19. — More than 3,500 Rotterdam dock workers demonstrated against Franco Spain today, but their banners merely proclaimed enigmatically: “Down with …”

Leaders explained that Rotterdam’s Mayor, Pieter Jacobus, had forbidden mention of the name Franco because Spain’s Caudillo still was head of a state with which The Netherlands had friendly relations.

Simultaneously on Rotterdam’s waterfront 120 students of a technical school sweated at the job of unloading 16,000 cases of Spanish oranges from the steamship Orpheus, which has been boycotted by the Communist-affiliated Dockers’ Union. Police guarded the pier.

The dispute over Spanish cargoes meanwhile, became a full-scale quarrel between dockers and shippers. Jan Bestman, union secretary, said 3,000 dockers had been “locked out” by the shipping companies which claim that Spanish cargoes are reaching Rotterdam under previous agreements in which Holland already has given goods or cash. Work continued only on those vessels which were being unloaded when the dispute began three days ago.

A conference between union leaders, municipal officials and representatives of the shipping companies was arranged for tomorrow.

SAN FRANCISCO — Cleve Jones has lived in the Castro neighborhood for nearly 50 years, almost from the day he graduated from high school in Phoenix and … END_OF_DOCUMENT_TOKEN_TO_BE_REPLACED

A home inspection can spare you from unpleasant surprises after you buy. After crunching the numbers, searching your favorite neighborhoods, and … END_OF_DOCUMENT_TOKEN_TO_BE_REPLACED