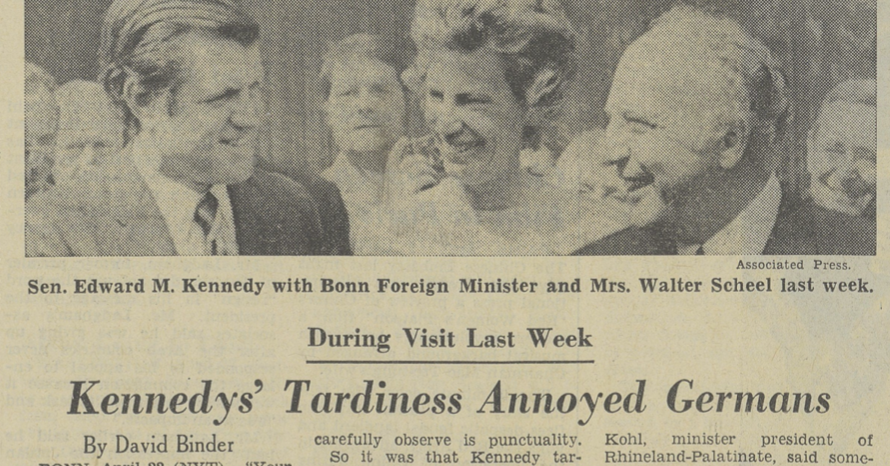 BONN, April 22 (NYT).— “Your Teddy Kennedy is a rube,” a senior protocol officer of the Bonn government said recently to an American acquaintance. The word he used means turnip in Germany. But it is also the slang equivalent of rapscallion. He did not mean it kindly.

The diplomat was referring to the happenings last week when Sen. Edward M. Kennedy, D., Mass., and his wife, Joan, descended on the federal capital with an entourage of more than 100, including the Boston Pops Orchestra.

What annoyed the protocol official and nearly everyone else who had anything to do with the Kennedys here was their habit of showing up late for every appointment.

The Germans in this century have not enjoyed a reputation abroad for good manners but one point of etiquette that they carefully observe is punctuality.

So it was that Kennedy tardiness made a bad impression, not only on their official hosts but also on the German press.

The occasion was a benefit concert at Beethoven Hall, with Mrs. Kennedy as the reader in the Pops Orchestra’s performance of Prokofiev’s “Peter and the Wolf.”

A critic for Die Welt of Hamburg said that she had done the job “with the voice of a long-suffering newscaster.”

The waiting for the Kennedys in Germany began in Hamburg, where Mrs. Kennedy slept through a reception planned for her. It continued in Bonn at the town hall, where she kept Mayor Peter Kramer and his fire department band waiting 40 minutes until she showed up in blue jeans.

Meanwhile, Sen. Kennedy was late for an appointment with Chancellery Minister Horst Ehmke, who stood for half an hour with increasing impatience at the steps of Schaumberg Palace to greet him.

Together, the Kennedys showed up an hour late for a cocktail party given by the U.S. ambassador, Kenneth Rush, at his home in Bad Godesberg.

Playing no favorites, they went on to appear 90 minutes late at another reception in suburban Rolansdeck. The host, Helmut Kohl, minister president of Rhineland-Palatinate, said somewhat stonily: “Kennedys were always welcome here, and that is no different today.”

Meanwhile, Foreign Minister Walter Scheel was waiting to give the Kennedys something to eat. He waited two hours.

Topping it all off, Mrs. Kennedy showed up late for the concert.

An American diplomat attempted to soothe the Germans with the explanation that tardiness was “customary and planned” by the Kennedys as a means of increasing the anticipation of their audiences.

There was only one German consolation prize for Sen. Kennedy. Bonn’s leading seeress, a Gypsy named Margarete Gussantier, who calls herself Buchela, predicted: “You will be President of America, but not yet.”

He is reported as having replied: “I have time.”

AUSTIN, Texas--(BUSINESS WIRE)--As the first multifamily management company to be recognized in the Public Relations and Marketing Excellence Awards, … END_OF_DOCUMENT_TOKEN_TO_BE_REPLACED

There have been whispers of cooling housing and rental prices in the San Francisco Bay Area, but that hasn't yet translated into practical, noticeable … END_OF_DOCUMENT_TOKEN_TO_BE_REPLACED

Cars pass in Independence Square at twilight in Kyiv, Ukraine, Monday, Oct. 31, 2022. Rolling ... [+] blackouts are increasing across Ukraine as the … END_OF_DOCUMENT_TOKEN_TO_BE_REPLACED