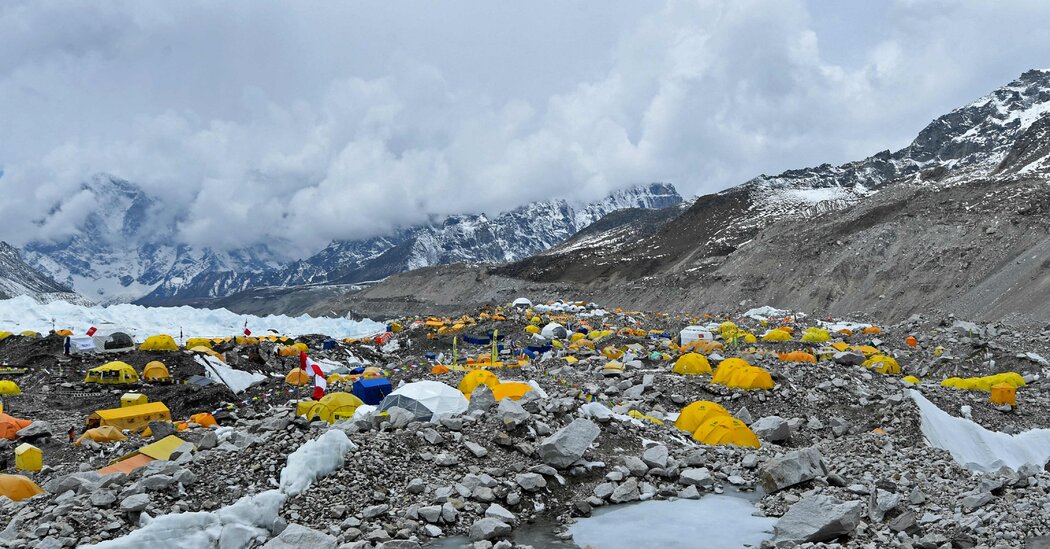 KATHMANDU, Nepal — Two climbers, a Swiss-Pakistani and an American, have died on Mount Everest, the first fatalities of a busy climbing season as a second wave of the coronavirus batters Nepal.

The expedition company that organized their climbs, Seven Summit Treks, said both men were experienced mountaineers who lost consciousness around Mount Everest’s “death zone,” an area above 8,000 meters (about 26,000 feet) named for its thin air and brutal weather.

When the climbers died on Wednesday, the wind had picked up on Everest. Climbing tourists and most of the Nepalese guides who aid them turned away from the summit on Thursday as weather conditions grew more severe.

Puwei Liu, 55, an experienced climber from California, died at the first camp below the peak after making an unsuccessful summit attempt on Wednesday, according to Chhang Dawa Sherpa, a Seven Summit Treks director.

hourslong traffic jams that can occur on the overcrowded path to the peak.

Nepal’s tourism department and the agency that organized their expedition ruled out any possible link to the coronavirus that is ravaging the small Himalayan country. Instead, they blamed high-altitude sickness. However, as with many of the hundreds who have died attempting Everest, no autopsies were planned, because of the bodies’ remote locations.

“No Covid. They died of altitude sickness. Had they Covid, they wouldn’t be able to reach at that height,” said Mingma Sherpa, Seven Summit Treks’ chairman.

virus safeguards imposed before the climbing season have worked.

Off the peaks, Nepal’s health care system is under incredible strain because of a rash of new cases, mirroring the ferocity of the second wave in neighboring India.

With hospitals running out of beds, vaccine in short supply and infections rising faster than clinics can record them, Nepal’s health ministry deemed the situation “unmanageable” last week.

AUSTIN, Texas--(BUSINESS WIRE)--As the first multifamily management company to be recognized in the Public Relations and Marketing Excellence Awards, … END_OF_DOCUMENT_TOKEN_TO_BE_REPLACED

There have been whispers of cooling housing and rental prices in the San Francisco Bay Area, but that hasn't yet translated into practical, noticeable … END_OF_DOCUMENT_TOKEN_TO_BE_REPLACED

Cars pass in Independence Square at twilight in Kyiv, Ukraine, Monday, Oct. 31, 2022. Rolling ... [+] blackouts are increasing across Ukraine as the … END_OF_DOCUMENT_TOKEN_TO_BE_REPLACED