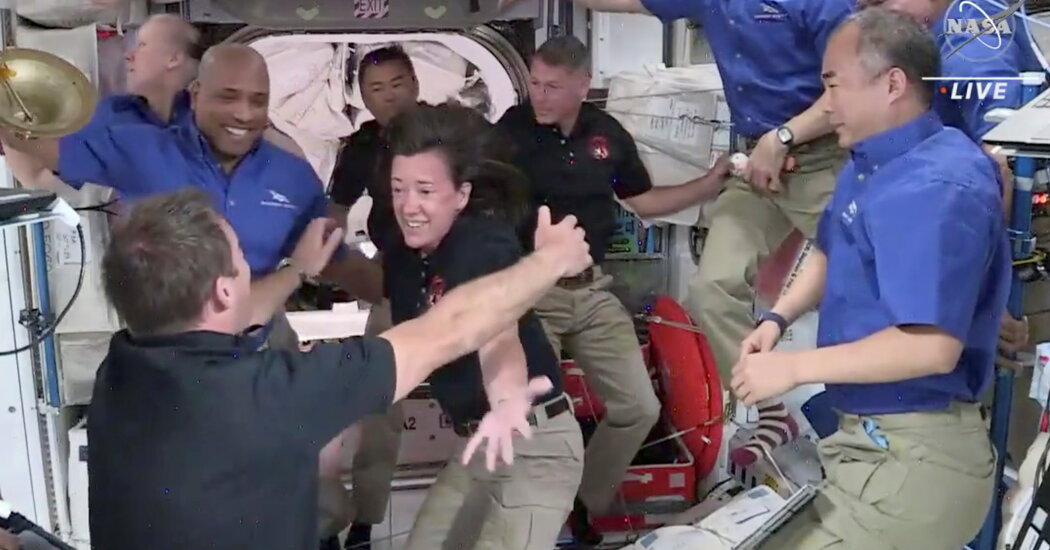 With those words, the four members of the Crew-2 Dragon Endeavour began floating one by one into the International Space Station on Saturday morning, about 24 hours after their capsule lifted off from the Kennedy Space Center in Florida.

The Dragon Endeavour docked onto the space station shortly after 5 a.m., according to Space X, the company run by Elon Musk that built the spacecraft.

Waiting to greet the crew were seven astronauts who beamed and hugged each of the new arrivals as they slowly made their way through a hatch and into the station.

“Their arrival means there are now 11 humans aboard our orbiting laboratory, a number not seen since the space shuttle era,” NASA said on Twitter.

The journey to the station was relatively smooth, though at one point the crew was warned that a piece of space debris was going to whiz past the capsule at about 1:43 p.m. Eastern time on Friday.

The astronauts were told to put on their spacesuits, get back in their seats and lower their protective visors. The debris was not immediately identified. NASA said the debris ended up passing about 28 miles from the capsule, a safe distance, and that the spacecraft was not at risk.

The crew will remain with three other astronauts: Mark Vande Hei of NASA, and two Russians, Oleg Novitskiy and Pyotr Dubrov, all of whom arrived at the station on April 9.

The four members of Crew-1, who arrived in November on the Dragon Resilience, will spend five days with Crew-2 before returning to Earth.

Douglas G. Hurley and Robert L. Behnken, who is married to Ms. McArthur — to the space station for a test flight to work out any remaining glitches in the systems.

Earlier this month, NASA awarded SpaceX a $2.9 billion contract to develop a giant rocket called Starship, which the company said will one day take people to Mars. Its first mission, however, will be to drop off NASA astronauts on the moon.

AUSTIN, Texas--(BUSINESS WIRE)--As the first multifamily management company to be recognized in the Public Relations and Marketing Excellence Awards, … END_OF_DOCUMENT_TOKEN_TO_BE_REPLACED

There have been whispers of cooling housing and rental prices in the San Francisco Bay Area, but that hasn't yet translated into practical, noticeable … END_OF_DOCUMENT_TOKEN_TO_BE_REPLACED

Cars pass in Independence Square at twilight in Kyiv, Ukraine, Monday, Oct. 31, 2022. Rolling ... [+] blackouts are increasing across Ukraine as the … END_OF_DOCUMENT_TOKEN_TO_BE_REPLACED