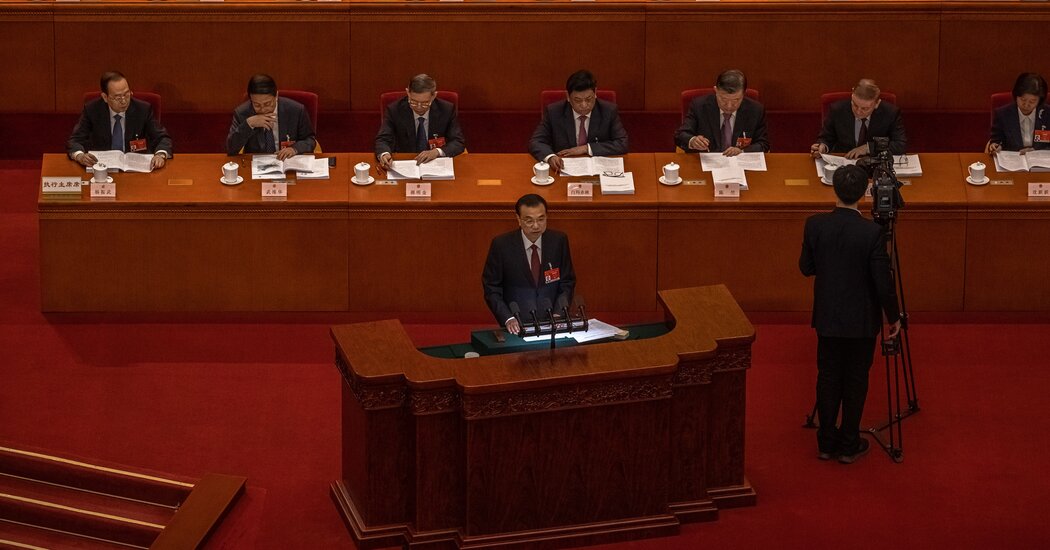 China’s leaders used the opening of the annual legislative assembly, the National People’s Congress, to unveil proposals that would drastically weaken the pro-democratic opposition in Hong Kong. They set a goal of at least 6 percent economic growth for this year along with announcing a robust rise in military spending. And they released a long-term plan that promised to ease China’s dependence on foreign energy, technology and markets.

The volley of actions reflected Mr. Xi’s conviction that momentum is in China’s favor as much of the world struggles with the pandemic and its economic and political aftershocks. After initially failing to contain the coronavirus last year, China imposed strict controls that all but wiped out the virus within its borders. That success has allowed for a relatively quick economic rebound and has bolstered the Chinese Communist Party’s belief that its authoritarian system has worked while the United States’ democratic system has faltered.

In the months leading up to the legislative meeting, Mr. Xi has sought to emphasize confidence in China’s authoritarian path. “The East is rising and the West is declining,” he said at a closed-door meeting last year to discuss China’s next long-term development plan, which was released at the Congress.

Lynette H. Ong, a political scientist at the University of Toronto.

By pushing through new rules for Hong Kong, Mr. Xi is taking aim at a thorn in his party’s side: opposition to Chinese rule that erupted in monthslong demonstrations in 2019.

The proposed election overhaul would effectively lock the beleaguered democratic camp out of election contests in the city. A Politburo member who introduced the draft rules said that they would help root out people who Beijing deemed not loyal to the country.

abandon setting an annual growth target for the first time in many years. China ended up recording growth of 2.3 percent in 2020, much slower than the usual pace of 6 percent or higher in recent years, but by far the best performance of any major economy.

But China’s growth last year was even more unbalanced than usual. The country lost ground on its goal of shifting from its addiction to exports and debt-fueled infrastructure investments, and toward a more sustainable reliance on domestic consumption. As in most countries during the pandemic, travel and leisure spending plummeted in China last year.

Mr. Li warned of risks ahead.

“As the coronavirus continues to spread around the world, instability and uncertainty are mounting on the international landscape, and the global economy continues to face grave challenges,” Mr. Li said as he delivered his annual report on the government’s work.

Mr. Li pledged to cut taxes for the smallest businesses, many of which are tiny shops in towns and villages. He promised to step up efforts to increase consumption but also indicated that infrastructure spending would continue at a very fast pace.

He forecast a slight narrowing of the central government’s budget deficit this year. That is to be achieved through limits on social spending, even as military spending continues to surge by nearly 7 percent a year. His government also released a draft plan for long-term development, setting out goals to transform the country into a technologically advanced and environmentally clean power over the next five years and beyond.

“Although remarkable achievements have been made in China’s economic and social development, we still have quite a way to go and a lot of hard work to do before we can achieve modernization in all respects,” Mr. Li said.

Chief Covelli said Mr. Crimo planned the shooting for several weeks, but that the authorities had not yet established what his motive was. “We have no … END_OF_DOCUMENT_TOKEN_TO_BE_REPLACED

Kevin McKenzie and Martine van Hamel were standing in the dining room of their weekend house in Woodstock, N.Y., trying to figure out when they got … END_OF_DOCUMENT_TOKEN_TO_BE_REPLACED