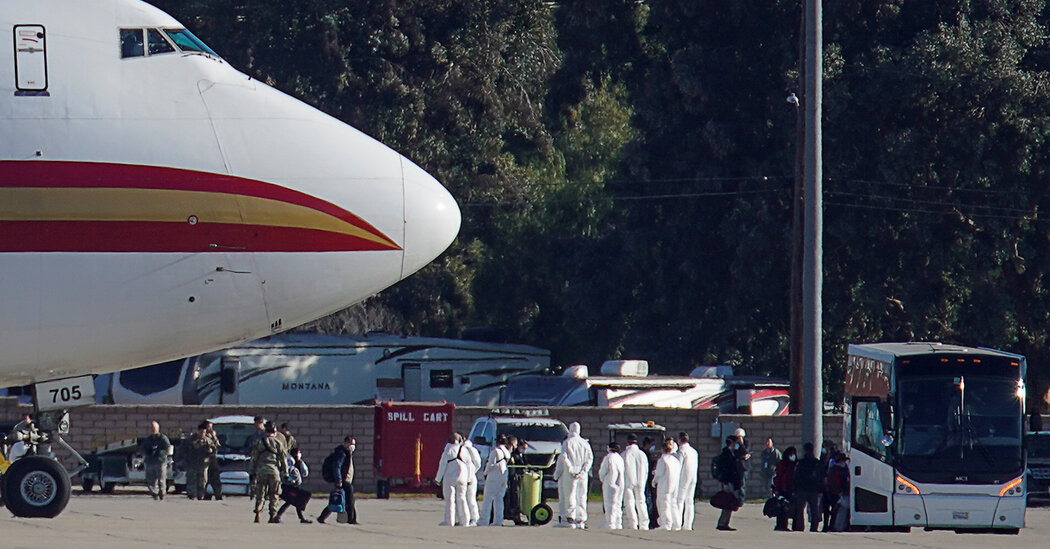 The government’s confused effort to retrieve Americans overseas during the early weeks of the coronavirus outbreak compromised the safety of the evacuees, federal employees and communities near where Americans returned to, according to a new report published on Monday by Congress’s nonpartisan watchdog.

The effort was so dysfunctional that federal health agencies could not even agree on the purpose and terms of the mission, contradicting one another about whether it was classified as an evacuation or repatriation.

The more-than-yearlong investigation by the Government Accountability Office concluded that the evacuation of Americans from China bogged down badly as different divisions within the Department of Health and Human Services argued over which was responsible. That fighting undermined the earliest attempts to protect those Americans after they returned from China, where the coronavirus was believed to have originated.

The G.A.O. said three agencies within the department — the Centers for Disease Control and Prevention, the Office of the Assistant Secretary for Preparedness and Response, and the Administration for Children and Families — “did not follow plans or guidance delineating their roles and responsibilities for repatriating individuals during a pandemic — an event these agencies had never experienced.”

According to the G.A.O. report issued Monday, as the Administration for Children and Families, or A.C.F., began its role overseeing the repatriation of the evacuees, lawyers at H.H.S. determined that the flights from Wuhan, China, constituted an evacuation, not a repatriation, and therefore were the C.D.C.’s responsibility.

For that reason, A.C.F. officials said resources from the federal government’s repatriation program were not used. But the decision from H.H.S. lawyers was not communicated to the C.D.C., the report said, and G.A.O. investigators were not given an explanation of the distinction between a repatriation and evacuation.

A focus of the report is the federal government’s response at March Air Reserve Base, near Los Angeles, where the health agencies functioned independently and without coordination, the G.A.O. said. As the A.C.F. prepared for the evacuees in late January, the Office of the Assistant Secretary for Preparedness and Response was abruptly put in charge on the day they arrived.

A.S.P.R.’s Incident Management Team “was not mobilized until after the flight landed and did not deploy to the site until January 31,” the report said. That led to broad confusion about who was in charge, with A.S.P.R. officials believing they were only supporting other agencies there.

The report describes other significant missteps, some of which had already been made public. It cites last year’s report from H.H.S. lawyers describing a scene at the base in which an A.C.F. official told health department employees to remove personal protective gear at a meeting with evacuees, lest there be “bad optics.”

Federal health agencies also struggled to stop those on the base from leaving in the absence of a federal quarantine order, which lasted several days, the report said. One person with the “potential to spread” Covid-19 attempted to leave the base.

The G.A.O. also wrote that federal health officials disagreed on which agency was responsible for infection control on the base, while the use of personal protective gear was uneven among poorly-trained federal employees there. The dispute led to an almost comical bureaucratic tangle.

At first, A.C.F. and A.S.P.R. officials viewed the C.D.C. as the body with more expertise and authority, including under a section of the federal government’s guidance on repatriation procedures related to Ebola. But C.D.C. officials told their colleagues that section was not applicable to other diseases, and that the agency was not responsible for managing the employees of other agencies. Still, the C.D.C. offered training after it was requested.

“According to H.H.S., C.D.C. personnel on the ground provided inconsistent and informal infection prevention and control guidance for the first 3 days of the mission because of a lack of clear roles,” the report said.

The G.A.O. noted that H.H.S. did not feature repatriation in its planning exercises for a pandemic, and therefore was not equipped to coordinate such an effort. “Until H.H.S. conducts such exercises, it will be unable to test its repatriation plans during a pandemic and identify areas for improvement,” the office wrote.

H.H.S. agreed with its recommendations, the G.A.O. said.

Whether you optimistically hope that mortgage rates will decline or are resigned that rates will stay elevated above the historic lows of 2021, you … END_OF_DOCUMENT_TOKEN_TO_BE_REPLACED

A resident of Nikopol, Ukraine, in her backyard last month, with smoke rising from an area on the opposite bank of the Dnipro River. Credit...David … END_OF_DOCUMENT_TOKEN_TO_BE_REPLACED