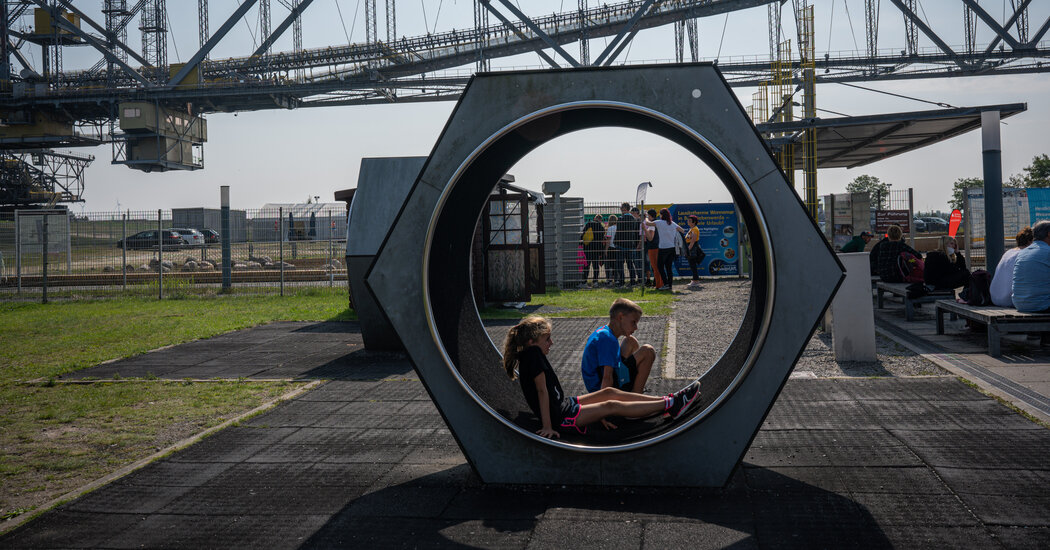 As Germany heads into an election that will see Angela Merkel step down after 16 years as chancellor, she leaves behind a country profoundly changed — and anxious about changing more.

STUTTGART, Germany — The small silver star at the tip of Aleksandar Djordjevic’s Mercedes shines bright. He polishes it every week.

Mr. Djordjevic makes combustion engines for Daimler, one of Germany’s flagship carmakers. He has a salary of around 60,000 euros (about $70,000), eight weeks of vacation and a guarantee negotiated by the union that he cannot be fired until 2030. He owns a two-story house and that E-class 250 model Mercedes in his driveway.

All of that is why Mr. Djordjevic polishes the star on his car.

“The star is something stable and something strong: It stands for Made in Germany,” he said.

parental leave in Catholic Bavaria. The married gay couple raising two children outside Berlin. The woman in a hijab teaching math in a high school near Frankfurt, where most students have German passports but few have German parents.

phase out nuclear power in Germany. She ended compulsory military service. She was the first chancellor to assert that Islam “belongs” to Germany. When it came to breaking down her country’s and party’s conservative family values, she was more timid but ultimately did not stand in the way.

Ms. Merkel’s legacy is less tangible but equally transformative. She changed Germany into a modern society — and a country less defined by its history.

She may be remembered most for her decision to welcome over a million refugees in 2015-16 when most other Western nations rejected them. It was a brief redemptive moment for the country that had committed the Holocaust and turned her into an icon of liberal democracy.

“It was a sort of healing,” said Karin Marré-Harrak, the headmaster of a high school in the multicultural city of Offenbach. “In a way we’ve become a more normal country.”

lingering inequality between East and West three decades after reunification is still evident, even though taxpayers’ money has flowed east and things have gradually improved. With the government planning to phase out coal production by 2038, billions more in funding are promised to help compensate for the job losses.

But as Mike Balzke, a worker at the nearby coal plant in Jänschwalde, put it: “We don’t want money — we want a future.”

Mr. Balzke recalled his optimism when Ms. Merkel first became chancellor. Because she was an easterner and a scientist, he expected her to be an ambassador for the East — and for coal.

Instead, his village lost a quarter of its population during her chancellorship. A promised train line from Forst to Berlin was never built. The post office shut down.

Mr. Balzke, 41, worries that the region will turn into a wasteland.

That anxiety runs deep. And it deepened again with the arrival of refugees in 2015.

was up in arms, but only a decade later, it has become the new normal.

Ms. Merkel never backed same-sex marriage outright, but she allowed lawmakers to vote for it, knowing that it would go through.

Mr. Winkler left the party again in 2019 after Ms. Merkel’s successor as conservative leader, Annegret Kramp-Karrenbauer, disparaged same-sex marriage. But he acknowledged his debt to the chancellor.

“It is a pity that you could not support opening marriage to same-sex couples,” he wrote. “Still, thank you that you ultimately made today’s decision possible.”

Then he invited her to visit his family, “to see for yourself.”

She never replied. But he and his family used to live just around the corner from Ms. Merkel, who never gave up her apartment in central Berlin. They would see her occasionally in the supermarket checkout line.

“There she was with toilet paper in her basket, going shopping like everyone else,” Mr. Winkler’s partner, Roland Mittermayer, recalled. Even after 16 years, they are still trying to figure the chancellor out.

“She is an enigma,” Mr. Winkler said. “She’s a bit like the queen — someone who has been around for a long time, but you never feel you really know her.”

Six hours northwest of Berlin, past endless green fields dotted with wind farms and a 40-minute ferry ride off the North Sea coast, lies Pellworm, a sleepy island where the Backsen family has been farming since 1703.

Two years ago, they took Ms. Merkel’s government to court for abandoning its carbon-dioxide emission targets under the Paris climate accord. They lost, but then tried again, filing a complaint at the constitutional court.

This time they won.

“It’s about freedom,” said Sophie Backsen, 23, who would like to take over her father’s farm one day.

“If you look at how our generation votes, it’s the opposite of what you see in the polls,” Paul said. “The Greens would be running the country.”

Pellworm is flush with the sea level and in parts even below it. Without a dike ringing the coastline, it would flood regularly.

“When you have permanent rain for three weeks, the island fills up like a bath tub inside the dikes,” Hannes said.

The prospect of rising sea levels is an existential threat here. “This is one of the most important elections,” Hannes said. “It’s the last chance really to get it right.”

“If not even a country like Germany can manage this,” he added, “what chance do we stand?”

GREENVILLE, N.C.--(BUSINESS WIRE)--Employers aiming to win the war on talent have a new “A” team to tap into: college and professional athletes. … END_OF_DOCUMENT_TOKEN_TO_BE_REPLACED

Mortgage rates are likely to rise in July, extending a seven-month streak. High inflation, and the Federal Reserve's efforts to control it, have … END_OF_DOCUMENT_TOKEN_TO_BE_REPLACED