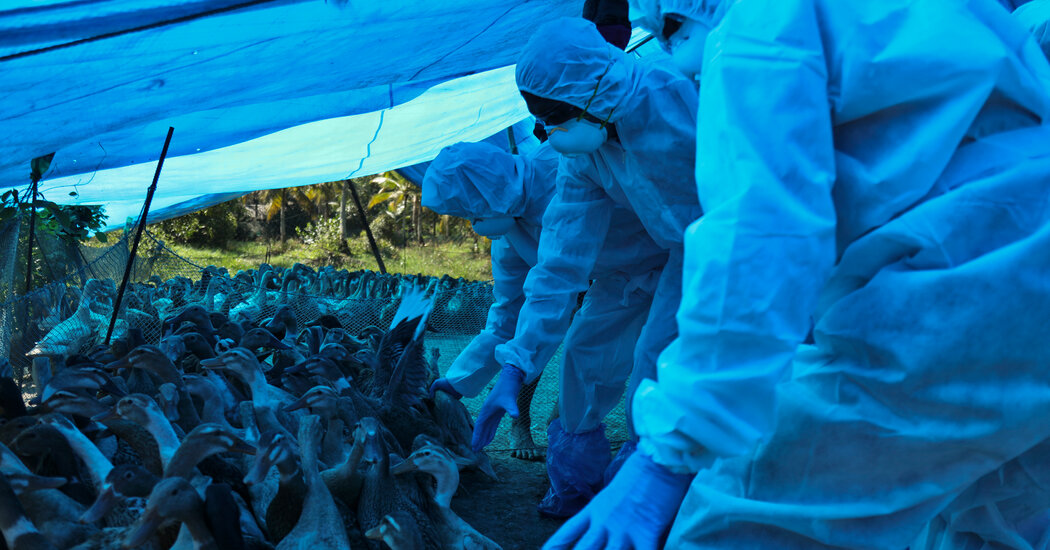 To Dr. Lucey, no one else seemed to be taking the infection of humans with H5N8 as “of any concern.” He added, “I think it’s of concern.”

Other scientists said they were not as worried.

Dr. Florian Krammer, a flu researcher at the Icahn School of Medicine at Mt. Sinai, said he was more concerned about other avian flu viruses like H5N1 that have already shown themselves to be dangerous to people. Another avian influenza virus, H7N9, infected people for the first time in 2013. There have been more than 1,500 confirmed cases and more than 600 deaths since then. Since 2017 there have been only three confirmed cases and the virus does not jump easily from person to person.

It is always possible that any virus can evolve human-to-human transmission, as well as become more dangerous. But H5N8 would have both hurdles to jump. Compared to other viral threats, Dr. Krammer said, “I’m not worried.”

Dr. Richard J. Webby, a flu specialist at the St. Jude Graduate School of Biomedical Sciences and director of the W.H.O.’s Collaborating Centre for Studies on the Ecology of Influenza in Animals and Birds, said that all of the H5 viruses are of concern because some of them have infected and killed people. But, he said, “They all have the same sort of binding capacity to human cells, which is limited,” he said. Flu viruses use a slightly different way to attach to cells in birds than to cells in humans and being good at one usually means not being good at the other.

Dr. Webby also said that while seven infections would certainly be of concern, only one infection has been confirmed. The tests of the other six involved nasal swabs and blood antibody tests. In people with no symptoms, he said, nasal swabs can simply indicate that they had breathed in virus. That would not mean it had infected them.

Blood antibody tests also have a potential for error, he said, and may not be able to distinguish exposure to one flu virus from another.

Nor did he see any scientific basis for suggesting that H5N8 is more likely than any other bird flu to evolve human-to-human transmission. But any virus could evolve that ability.

AUSTIN, Texas--(BUSINESS WIRE)--As the first multifamily management company to be recognized in the Public Relations and Marketing Excellence Awards, … END_OF_DOCUMENT_TOKEN_TO_BE_REPLACED

There have been whispers of cooling housing and rental prices in the San Francisco Bay Area, but that hasn't yet translated into practical, noticeable … END_OF_DOCUMENT_TOKEN_TO_BE_REPLACED

Cars pass in Independence Square at twilight in Kyiv, Ukraine, Monday, Oct. 31, 2022. Rolling ... [+] blackouts are increasing across Ukraine as the … END_OF_DOCUMENT_TOKEN_TO_BE_REPLACED