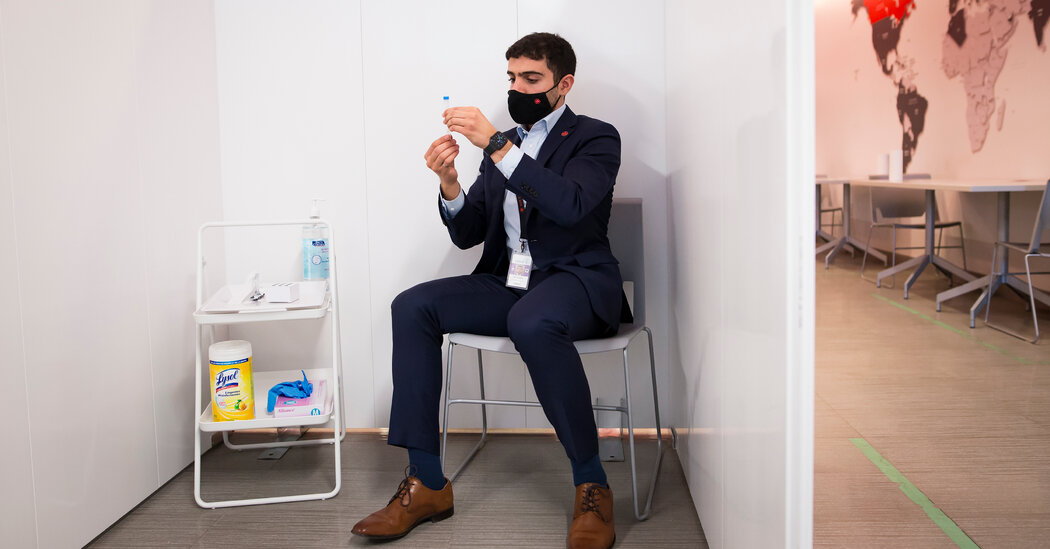 A team of Canadian researchers who brought together some of that country’s largest businesses to scale up a rapid coronavirus testing program is now trying to replicate its success in the United States, with the aim of reviving the economy and getting thousands of Americans back to work.

The organizers of the new program, called the U.S. Rapid Action Consortium, will announce on Wednesday that they are trying to recruit 12 companies to screen asymptomatic employees with rapid antigen tests on a routine basis. Four companies have signed on so far, including Air Canada and Scotiabank. Both participate in the Canadian program, which also began with 12 firms and has grown to include 400.

The consortium hopes that by joining forces, companies in the United States will be able to increase their purchasing power and quickly learn how to use rapid tests to prevent outbreaks and reopen shuttered businesses.

“Industry is essentially saying, ‘We need to act now. This remains a crisis for us. Every day that our employees are not at work is another day that our business isn’t optimized,’” said Dr. Michael Mina, a Harvard University epidemiologist and expert in rapid testing who has been asked to advise the group.

Creative Destruction Lab, which helps science and technology start-ups. In the United States, the lab is partnering with Covid Collaborative, a bipartisan association of policy experts, and Genpact, a global professional services firm that has operations in Texas and is also involved in the Canadian effort.

“The ultimate goal is to take the cost of this down dramatically and just reopen the economy much faster and for our employees, make it a safe place to come to work,” Darren Saumur, Genpact’s global operating officer, said in an interview.

In Canada, where the program has been running for two months, employees periodically stop into screening stations set up outside their workplaces and take rapid antigen tests.

These tests are relatively cheap and can return results in 15 minutes, but are less sensitive and more prone to false negatives than polymerase chain reaction, or P.C.R., tests that are the gold standard for detecting the coronavirus. Employees who test positive on the rapid antigen test are referred for a follow-up P.C.R. test.

Between January 11 and March 18, the Canadian program administered more than 21,000 rapid tests across 42 different sites. Just 19 returned positive results; of those, 16 were confirmed as positive by P.C.R. testing, consortium officials say.

Participating companies must pay for their own tests, but the consortium will provide a detailed “playbook” to help companies set up their programs, as well as operational support. Companies that participate in the first cohort will be asked to help the next group of companies implement their programs.

“You have to promise that you’re going to pay it forward,” Mr. Agrawal said.

GREENVILLE, N.C.--(BUSINESS WIRE)--Employers aiming to win the war on talent have a new “A” team to tap into: college and professional athletes. … END_OF_DOCUMENT_TOKEN_TO_BE_REPLACED

Mortgage rates are likely to rise in July, extending a seven-month streak. High inflation, and the Federal Reserve's efforts to control it, have … END_OF_DOCUMENT_TOKEN_TO_BE_REPLACED