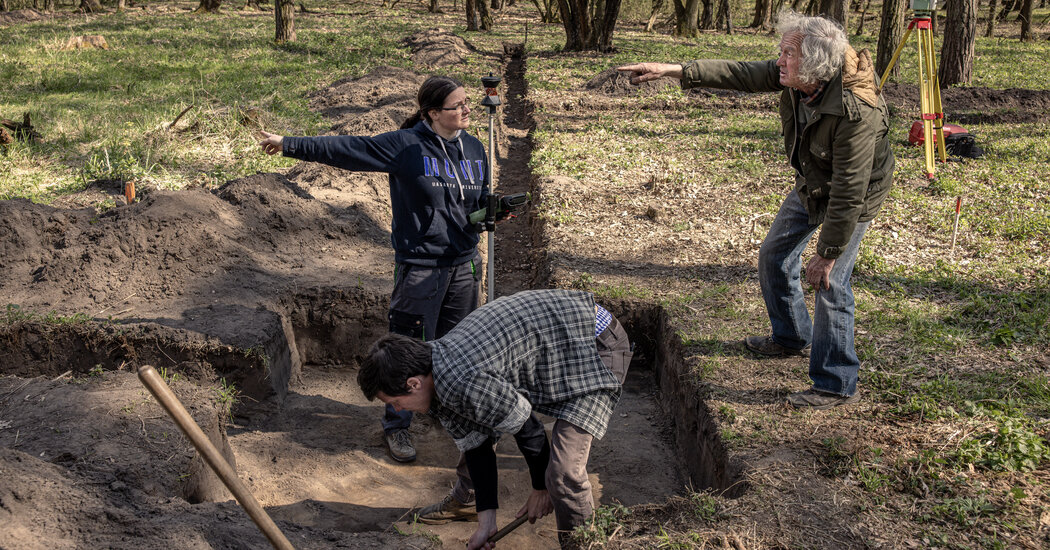 LANY, Czech Republic — In a region long fought over by rival ethnic and linguistic groups, archaeologists in the Czech Republic have discovered something unusual in these turbulent parts: evidence that peoples locked in hostility for much of the modern era got along in centuries past.

A few yards from a Czech Army pillbox built as a defense against Nazi Germany, the archaeologists discovered a cattle bone that they say bears inscriptions dating from the sixth century that suggest that different peoples speaking different languages mingled and exchanged ideas at that time.

Perhaps fitting for a such a fractious region, the find has set off a furious brawl among academics and archaeologists, and nationalists and Europhiles, about what it all means.

The bone fragment, identified by DNA analysis and carbon dating as coming from the rib of a cow that lived around 1,400 years ago, was found in a Slavic settlement in 2017, said Jiri Machacek, the head of the archaeology department at Masaryk University in the Czech city of Brno. But in what is considered a major finding, a team of scholars led by Dr. Machacek recently concluded that the bone bears sixth-century runes, a system of writing developed by early Germans.

article by Czech, Austrian, Swiss and Australian scholars in the Journal of Archaeological Science.

The scratching, according to the Masaryk University team, turned out to be runic lettering, an ancient alphabet that was used by Germanic tribes before the adoption of the Latin script.

Inscribed on the bone are six of the last eight runes from a 24-letter alphabet known as Old Futhark, the oldest runic alphabet used by Germanic tribes during the first half of the first millennium.

Unlike Germanic tribes, who used runic lettering as early as the first century, speakers of Slavic tongues in places like Moravia, the site of an early Slav polity known as Great Moravia, were not thought to have had a written language until the ninth century.

“Suddenly, because of an archaeological find, the situation looks different,” said Dr. Machacek. “We see that people from the very beginning were connected, that Slavic people used runes” developed by early Germans, or at least had contact with them.

That Slavs also used or intermingled with people who used Germanic runes long before the arrival of the Greek monks who created Cyrillic, he added, upsets a conviction entrenched over centuries that Slavic culture developed separately from that of Germanic peoples and rests on its unique alphabet.

That was a major factor in the uproar that greeted the Masaryk University group’s findings.

Zuzana Hofmanova, a member of the Brno team who analyzes ancient DNA, said she recently received an anonymous message denouncing her and fellow scholars working on the inscribed sixth-century bone as traitors who deserved to be killed.

“Archaeological information can sometimes be misconstrued by people searching for ethnic purity,” she lamented.

The Seattle Seahawks are very much still in the running for Baker Mayfield. (Photo by Stacy ... [+] Revere/Getty Images) Getty Images The Seattle … END_OF_DOCUMENT_TOKEN_TO_BE_REPLACED

(CNN) — Kim Kyung-seop recalls going to cheap bars after class with his friends, where they binged on as much makgeolli as possible. "You know the … END_OF_DOCUMENT_TOKEN_TO_BE_REPLACED