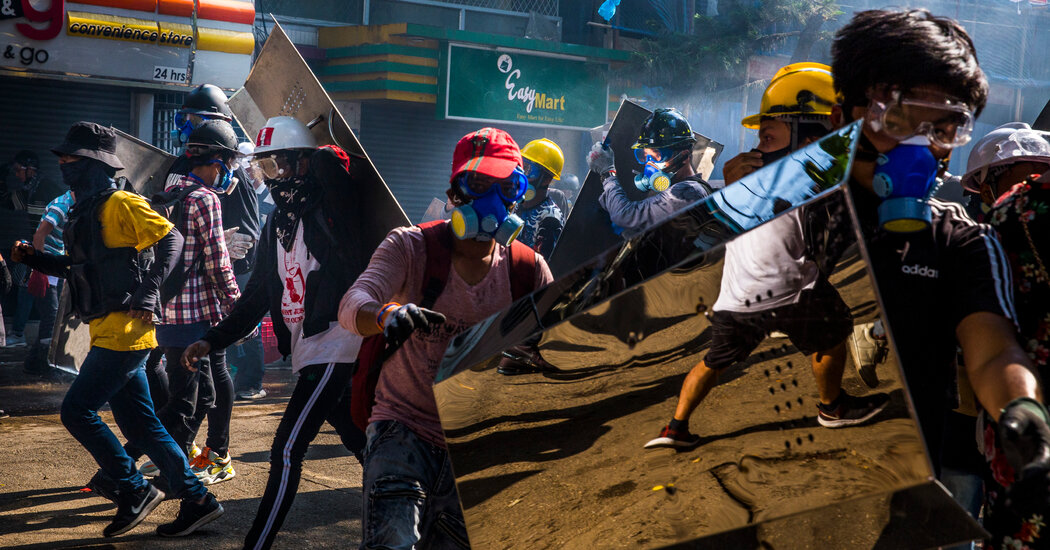 Until Thursday, Myaing, a small town in central Myanmar, was best known for its production of thanaka, a bark that is ground for use as a cooling cosmetic.

But in the late morning of March 11, the town, which can be traversed in 10 minutes, became synonymous with the brutality of the military that seized power last month. Myaing’s rain-slicked streets were mottled with blood as police officers shot into a cluster of unarmed civilians, killing at least eight people and injuring more than 20, according to witnesses and hospital officials.

U Myint Zaw Win was among the crowd that scattered with the bursts of live ammunition in the late morning, outside Myaing’s police station. When he looked back, he saw a body with half its head blown apart, on a street that he has walked all his life. He did not know whose body it was, but he said a mason and a bus driver were among the dead.

“They were shooting people like shooting birds,” Mr. Myint Zaw Win said of the police officers, some of whom he said he knows personally because Myaing is a small town where almost everyone knows each other.

70 people in Myanmar have been killed by security forces since the army staged its Feb. 1 coup, ousting a civilian leadership and returning the country to the nightmare of full military rule.

While the bulk of the deaths have been in big cities like Yangon and Mandalay, security forces have shot and killed people in at least 17 different towns across the country: Taungdwingyi, Myingyan, Salin, Kalay, Htee Lin and Pyapon, among others.

worst attacks have been reserved for ethnic minorities, such as Rohingya Muslims whose persecution is being tried as genocide in international courts.

populace accustomed to massacres by the military. On Thursday, three people were shot dead in the cities of Yangon, Mandalay and Bago. Another person who had been shot on March 3 in the town of Myinchan succumbed to his injuries on Thursday as well.

Before the gunfire turned downtown Myaing into a battlefield on Thursday, residents had gathered daily, in hard hats and motorcycle helmets, to march against the military’s seizure of power last month. Its residents were just as determined as those in larger metropolises to speak out against the coup, during which dozens of elected politicians, including the civilian leader Daw Aung San Suu Kyi, were detained.

On Thursday, a military spokesman accused Ms. Aung San Suu Kyi of having illicitly received 25 pounds of gold and about $600,000. Ms. Aung San Suu Kyi heads the National League for Democracy, which won the last two elections by landslides. She has been charged with various other crimes that could see her imprisoned for years, including the obscure infraction of possessing foreign walkie-talkies without proper import licenses.

Two days after the putsch, Myaing’s residents began marching down its half-paved streets, demanding that Ms. Aung San Suu Kyi and other elected officials be returned to office. They have carried on every day since. On Thursday, at least two youth from a local monastery were arrested and a crowd gathered at the police station to find out why. They sat in quiet protest.

There was no warning that live ammunition was to come, witnesses said. The police refused to comment.

Around the same time, in Yangon, the nation’s largest city, security forces fired on a crowd in North Dagon township, striking Ko Chit Min Thu, a 25-year-old collector of recycled materials, in the head. He died almost immediately, his relatives and other protesters said.

Worried that security forces would seize the body — as has happened in recent days and in Mandalay on Thursday — other protesters carried Mr. Chit Min Thu away from the shooting zone.

By early afternoon, his body was back at home with mourners gathered around. A bandage obscured his fatal head wound. His widow, Ma Aye Chan Myint, keened, their two-year-old son by her side. She is pregnant, in her first trimester.

Ms. Aye Chan Myint reached out to touch the feet and face of her husband, who went to protest each day with hopes that a surge of civilian strength could somehow dislodge the military from power.

“You said I should be proud,” she told her husband’s body. “I’m proud of you, my love.”

DALLAS — The rollback of abortion rights has been received by many American women with a sense of shock and fear, and warnings about an ominous … END_OF_DOCUMENT_TOKEN_TO_BE_REPLACED

The poshest place in California's Coachella Valley is The Madison Club. This exclusive gated community in La Quinta is where A-listers and tycoons … END_OF_DOCUMENT_TOKEN_TO_BE_REPLACED