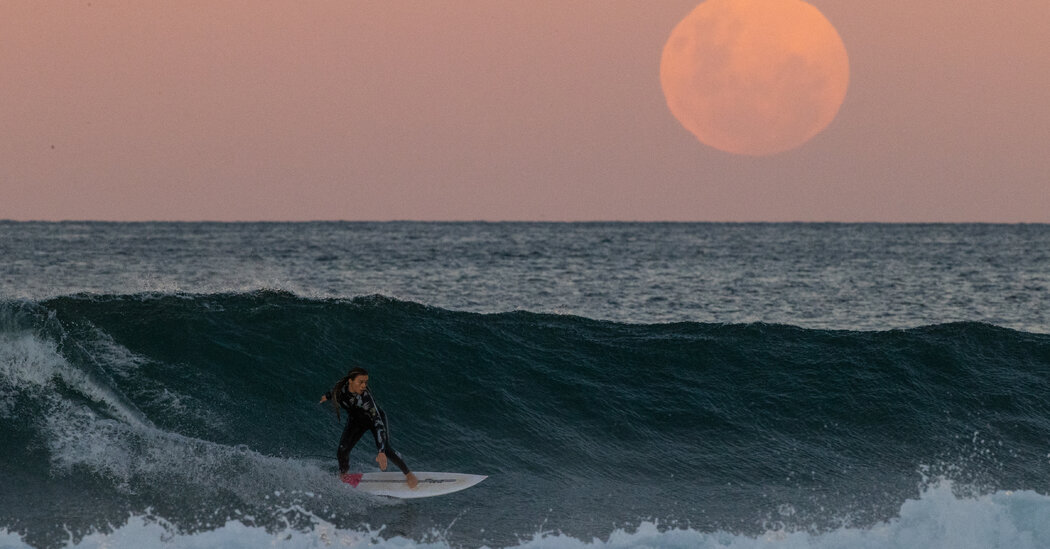 Australians were among those lucky enough to see it on Wednesday evening, a rare astronomical event marked by a dazzling array of sunset colors like red and burnt orange: a “super blood moon.”

From Brazil to Alaska, California to Indonesia, people with the right view of the celestial phenomenon marveled as their moon, usually a predictable, pale, Swiss-cheese-like round in the sky, was transformed into a fierce, red giant. As one Twitter user, words failing, put it: “Man I’m in love with this urghhh.”

The striking display was the result of two simultaneous phenomena: a supermoon (when the moon lines up closer than normal to our planet and appears to be bigger than usual), combined with a total lunar eclipse, or blood moon (when the moon sits directly in the Earth’s shadow and is struck by light filtered through the Earth’s atmosphere).

“A little bit of sunlight skims the Earth’s atmosphere,” said Brad Tucker, an astrophysicist and cosmologist based at the Australian National University in Canberra, the country’s capital. He said this creates the effect of “sunrise and sunset being projected onto the moon.”

on a special flight to see the supermoon. It left Sydney about 7:45 p.m. and was to return later that evening. Vanessa Moss, an astronomer with Australia’s national science agency, CSIRO, and the guest expert on the flight, said this kind of phenomenon was exciting because it was accessible.

“You don’t need a telescope; you don’t need binoculars,” she said, adding that it was a good chance to “look up at the sky and think about our place in the universe.”

studied humanity’s relationship with space, wrote in an email.

“We wonder whether the red moon is a sign of the end of disruption and suffering, or another beginning,” he said, adding that the moon provides one of the constants in our lives. “When that’s disrupted, we temporarily lose our moorings, and for a moment we’re jostled from the world we take for granted.”

Hometown Deli, Paulsboro, N.J.Mike Calia | CNBCThree men were charged with fraud and other crimes in a scheme involving a company that was worth $100 … END_OF_DOCUMENT_TOKEN_TO_BE_REPLACED

Even before Jens Rasmussen and Maria Aparo decided to spend their lives together, they shared several experiences. Both, for instance, have enjoyed … END_OF_DOCUMENT_TOKEN_TO_BE_REPLACED