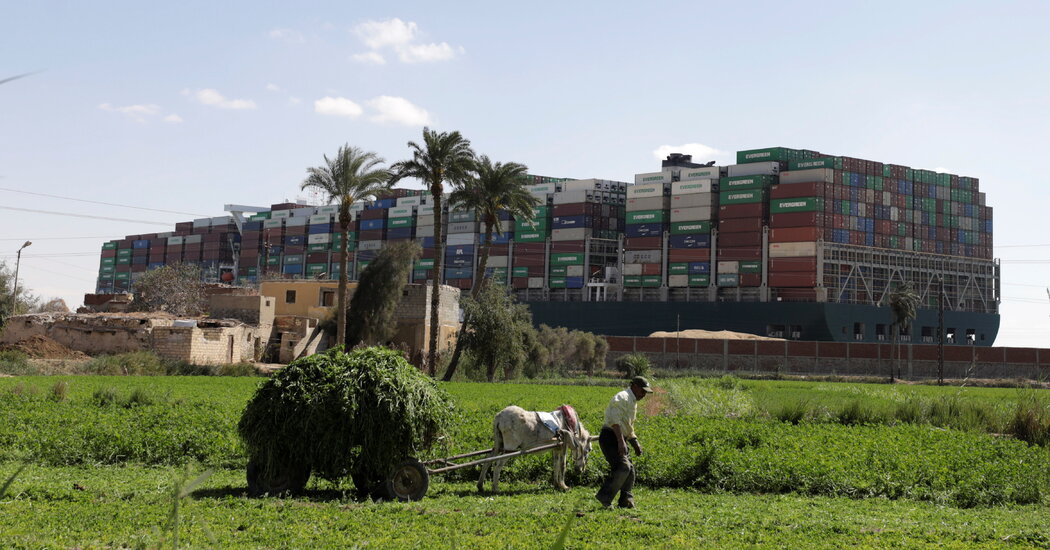 She looked up from where she sat in the bumpy dirt lane and considered what the vessel, the Ever Given, might be carrying in all those containers. Flat-screen TVs? Full-sized refrigerators, washing machines or ceiling fans? Neither she nor her neighbors in the hamlet of Manshiyet Rugola, population 5,000-ish, had any of those at home.

“Why don’t they pull out one of those containers?” joked Umm Gaafar, 65. “There could be something good in there. Maybe it could feed the town.”

The Japanese-owned Ever Given and the nearly 300 cargo ships now waiting to traverse the Suez Canal, one of the world’s most critical shipping arteries, could supply Manshiyet Rugola many, many times over.

ran aground on Tuesday, blocking all shipping traffic through the canal, global supply chains churned closer to a full-blown crisis.

“All global retail trade moves in containers, or 90 percent of it,” said Alan Murphy, the founder of Sea-Intelligence, a maritime data and analysis firm. “So everything is impacted. Name any brand name, and they will be stuck on one of those vessels.”

take the long way around the southern tip of Africa, a journey that could add weeks to the journey and cost more than $26,000 per extra day in fuel costs.

In Manshiyet Rugola, whose name translates to “Little Village of Manhood,” traffic jams of any kind would be difficult to imagine in usual times.

Donkey carts piled high with clover bumped down semi-paved lanes between low brick houses and green fields lined with palm trees, trash and animal dung. A teenager hawked ice cream from his motorcycle. Roosters offered profane competition to the noontime call to prayer. Until the Ever Given showed up, the minarets of the unimposing mosques were the tallest structures around.

“Do you want to see the ship?” a young boy asked a pair of visiting journalists, bobbing in excitement under the window of their car. Ever since the earthquake-like rumble of the ship running aground jolted many awake around 7 a.m. Tuesday, the Ever Given had been the only topic in town.

“The whole village was out there watching,” said Youssef Ghareeb, 19, a factory worker. “We’ve gotten so used to having her around, because we’ve been living on our rooftops just watching the ship for four days.”

It was universally agreed that the view was even better at night, when the ship glowed with light: a skyscraper right out of a big-city skyline, lying on its side.

“When it lights up at night, it’s like the Titanic,” said Nadia, who, like her neighbor Umm Gaafar, declined to give her full name because of the security forces in the area. “All it’s missing is the necklace from the movie.”

Umm Gaafar had asked to go by her nickname so as not to run afoul of the government security personnel who had passed through, warning residents not to take photos of the canal and generally spreading unease. Nadia said she was too intimidated to take pictures of the ship at night, though she badly wanted to.

Villagers and shipping analysts had the same question about the Ever Given, if rooted in different expertise. The ship’s operators have insisted that the ship ran aground because of the high winds of a sandstorm, with the stacked containers acting like a giant sail, yet other ships in the same convoy passed through without incident. So had previous ships in previous storms, the villagers pointed out.

“We’ve seen worse winds,” said Ahmad al-Sayed, 19, a security guard, “but nothing like that ever happened before.”

Shipping experts said the wind might well have been the major factor, exacerbating other physical forces, but suggested that human error may also have come into play.

“I am highly questioning, why was it the only one that went aground?” Captain Foran said. “But they can talk about all that later. Right now, they just have to get that beast out of the canal.”

Chief Covelli said Mr. Crimo planned the shooting for several weeks, but that the authorities had not yet established what his motive was. “We have no … END_OF_DOCUMENT_TOKEN_TO_BE_REPLACED

Kevin McKenzie and Martine van Hamel were standing in the dining room of their weekend house in Woodstock, N.Y., trying to figure out when they got … END_OF_DOCUMENT_TOKEN_TO_BE_REPLACED