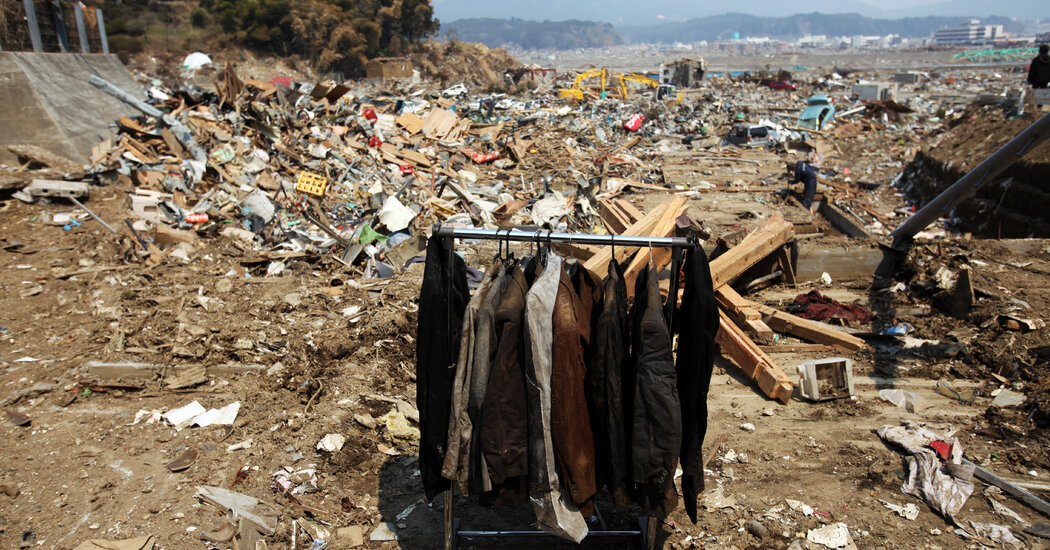 KESEN, Japan — For centuries, this village rode the currents of time: war and plague, the sowing and reaping of rice, the planting and felling of trees.

Then the wave hit. Time stopped. And the village became history.

When a catastrophic earthquake and tsunami struck coastal Japan on March 11, 2011, more than 200 residents of the village, Kesen, in Iwate Prefecture, were killed. All but two of 550 homes were destroyed.

After the waters receded, nearly everyone who survived fled. They left behind their destroyed possessions, the tombs of their ancestors and the land their forefathers had farmed for generations.

But 15 residents refused to abandon Kesen and vowed to rebuild. Twice a year since 2011, Hiroko Maisuke, a photographer for The New York Times, has visited the village to document the survivors’ all-but-doomed mission of remaking their hometown.

“Our ancestors lived in this village 1,000 years ago,” said Naoshi Sato, 87, a lumberjack and farmer whose son was killed in the tsunami. “There were disasters then, too. Each time the people stayed. They rebuilt and stayed. Rebuilt and stayed. I feel an obligation to continue what my ancestors started. I don’t want to lose my hometown.”

Many of those who remained, including Mr. Sato, lived for months without power or running water. For a year, Mr. Sato camped in the fetid wreckage of his home. For a decade, he has dreamed of Kesen’s rebirth.

Every day of that first year after the tsunami, he trekked into the woods, and by himself chopped the trees that he used to rebuild his two-bedroom house. When only two other families followed his lead and rebuilt their homes, Mr. Sato’s wife and daughter-in-law realized the futility of his plan and left him behind.

Those who chose to stay in Kesen were old in 2011. Now in their 70s, 80s and 90s, they are older still. Slowly, over the past decade, a grim reality has settled over this place: There is no going back. Kesen will never be restored. This emptiness will last forever.

Mr. Sato is resigned that his mission may have been for naught. Three houses have been built and he has kept his former neighbor’s farmlands from deteriorating, but he concedes that without new residents, the village will die.

“I am very sad,” he said. “I regret that people will not come back.”

He blames the government. It took nine years and $840 million for the authorities to complete a project in which the high ground above the village was converted to land for residential construction.

By then, he said, it was too late. Almost everyone who left a decade ago has made a new home elsewhere. Unlike other nearby towns within the city of Rikuzentakata, which have also received government funding, the new elevated area above the destroyed village lacks amenities, including shops and a supermarket.

“Right now, given the coronavirus pandemic, I’m lucky to live here,” Mr. Sato said. To make sure his wry joke was understood, he added, “The air is clean and there are not too many people.”

On the high ground, a handful of newly constructed houses have sprung up around Kongoji Temple. Like the mythic Ship of Theseus, whose component parts over time were all replaced, Kongoji is both the same temple that has been in the community for 1,200 years and an entirely new one built in 2017.

For centuries, the temple has served as a community calendar, marking time with 33 events a year. Those rites have effectively come to a halt, but on Thursday, Nobuo Kobayashi, Kongoji’s chief monk, will welcome the scattered members of the community to Kesen for a memorial service.

Mr. Kobayashi has worked tirelessly to make sure the families have a place to mourn their loved ones, but he is realistic about the temple ever again echoing with sounds other than lamentations of grief.

“Of course, I would like to rebuild the kind of temple we had before the tsunami,” Mr. Kobayashi said. “But people don’t want to come back to the place where they lost friends and family. And there’s the fear; people are afraid of another tsunami.”

An anniversary is an arbitrary but useful reminder of how time passes. Ten years is a satisfyingly round number, but it’s just one of many figures by which to measure the tragedy.

A decade feels like an eternity for those who lost a child in mere seconds, but it’s a brief moment in Japan’s history. It’s an even shorter blip in the billion-year history of the tectonic plates, whose grinding shifts triggered the earthquake and tsunami.

It’s that long view of history that gives the holdouts hope that Kesen will again rise from the wreckage.

Mr. Sato, the logger, will turn 88 next week. He awakes each morning at 6 and places a cup of green tea on his home altar — an offer to the spirits of his son and ancestors. And then, like his forebears, he tends to his rice field and vegetable patch.

“I’d like to see how this place will look 30 years from now,” he said. “But by then, I’ll have to see it from heaven. And I don’t think that will be possible.”

You were seeing double this week: A spectacular $54 million compound featuring two equally luxurious mansions separated by a private lake in Southwest … END_OF_DOCUMENT_TOKEN_TO_BE_REPLACED