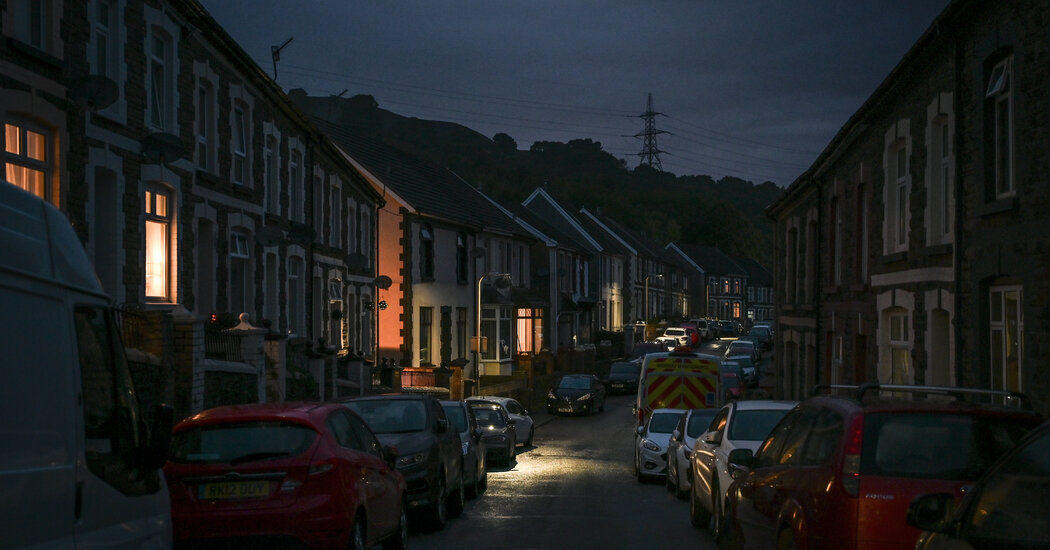 ABERFAN, Wales — As the days count down to Queen Elizabeth II’s funeral on Monday, Gaynor Madgwick has been of two minds: Should she watch the ceremony from her home in South Wales or join the crowds in London to pay her respects in person?

Her brain says stay. Ms. Madgwick, 64, has feared crowds and confined spaces since an avalanche of slurry — a mixture of debris from a coal mine and water — cascaded down the hillside above her village of Aberfan in 1966. One of the worst civilian disasters in contemporary British history, the avalanche crushed the village school, killed 144 villagers, 116 of them children, and left Ms. Madgwick trapped, but alive, beneath the rubble.

Her heart says go. The queen built an unusually strong relationship with Aberfan, beginning in the days after that very disaster and extending through four visits the queen made to the village.

the death of Queen Elizabeth II — the ever-present backdrop to a century of dramatic social change — has felt like a rug snatched from beneath them, even if they never met or saw her.

reassessment of national identity that, in Wales, includes calls for an independent Welsh state.

Elizabeth arrived in Bonn on the first state visit by a British monarch to Germany in more than 50 years. The trip formally sealed the reconciliation between the two nations following the world wars.

First grandchild. In 1977, the queen stepped into the role of grandmother for the first time, after Princess Anne gave birth to a son, Peter. Elizabeth’s four children have given her a total of eight grandchildren, who have been followed by several great-grandchildren.

Princess Diana’s death. In a rare televised broadcast ahead of Diana’s funeral in 1997, Queen Elizabeth remembered the Princess of Wales, who died in a car crash in Paris at age 36, as “an exceptional and gifted human being.”

A trip to Ireland. In May 2011, the queen visited the Irish Republic, whose troubled relationship with the British monarchy spanned centuries. The trip, infused with powerful symbols of reconciliation, is considered one of the most politically freighted trips of Elizabeth’s reign.

Breaking a record. As of 5:30 p.m. British time on Sept. 9, 2015, Elizabeth II became Britain’s longest-reigning monarch, surpassing Queen Victoria, her great-great-grandmother. Elizabeth was 89 at the time, and had ruled for 23,226 days, 16 hours and about 30 minutes.

Marking 70 years of marriage. On Nov. 20, 2017, the queen and Prince Philip celebrated their 70th anniversary, becoming the longest-married couple in royal history. The two wed in 1947, as the country and the world was still reeling from the atrocities of World War II.

Ms. Madgwick survived, her leg broken by a dislodged radiator. Her sister and brother, Marilyn and Carl, both died.

The scale of the disaster quickly made it a moment of national introspection and trauma, and the queen soon decided to visit.

One of the biggest regrets of her reign was that she did not go sooner, a leading aide later said, and some villagers say the eight-day delay rankled the community at the time. But today, the residents largely remember her arrival as a moving gesture of solidarity from someone they never expected to lay eyes on.

research published in the British Journal of Psychiatry.

Other wings of the British state angered the village by refusing to prosecute any coal industry officials for negligence. Successive governments also declined to cover the whole cost of removing other dangerous slurry tips near the village, forcing villagers to dip into donations intended for survivors, until they were finally fully reimbursed in 2007.

But the queen’s concern for Aberfan meant that she was seen as separate from the state’s indifference, despite being its titular head.

Elsewhere in Britain, people have debated whether the queen could really ever rise beyond politics, given the monarch’s interest in maintaining her own role in Britain’s political system. But in Aberfan, there was less doubt.

“There’s no political agenda there,” said Jeff Edwards, 64, the last child to be rescued from the rubble. “The queen is above all that.”

In Aberfan, most people expressed sympathy for her family and respect for her sense of duty. But there are those, particularly among young generations, who have had a more ambivalent response to the queen’s death.

For some, the accession of King Charles III — as well as the abrupt appointment of his son William to his former role of Prince of Wales — is more problematic.

“I should be Prince of Wales, I’m more Welsh than Charles or William,” said Darren Martin, 47, a gardener in the village, with a laugh. Of the queen, he said: “Don’t get me wrong, I admire the woman. But I do think the time has come for us in Wales to be ruled by our own people.”

The abruptness of the queen’s death was a psychological jolt that has prompted, in some, a rethinking of long-held norms and doctrines.

“If things can change drastically like that, why can’t things change here?” asked Jordan McCarthy, 21, another gardener in Aberfan. “I would like Welsh independence.”

Of a monarchy, he added: “Only if they’re born and raised in Wales — that’s the only king or queen I’ll accept.”

Generally, though, the mood in Aberfan has been one of quiet mourning and deference. The local library opened a book of condolence. Villagers gathered in the pub to watch the new king’s speeches and processions. Some left bouquets beside the tree planted by the queen.

On Monday night, a men’s choir, founded by grieving relatives half a century ago, gathered for their biweekly practice. Proud Welshmen, they were preparing for their next performance — singing songs and hymns, some of them in Welsh, on the sidelines of the Welsh rugby team’s upcoming game.

But halfway through, the choir’s president, Steve Beasley, stood up.

“We all know about the queen,” Mr. Beasley said. “Please stand up for a minute’s silence.”

Soon after Herschel Walker, the former football star, announced he would run for U.S. Senate in Georgia as a Republican, his son Christian appeared … END_OF_DOCUMENT_TOKEN_TO_BE_REPLACED

SpaceX launched four people to the International Space Station from Florida on Wednesday, as Elon Musk's company keeps up a steady pace of crewed … END_OF_DOCUMENT_TOKEN_TO_BE_REPLACED