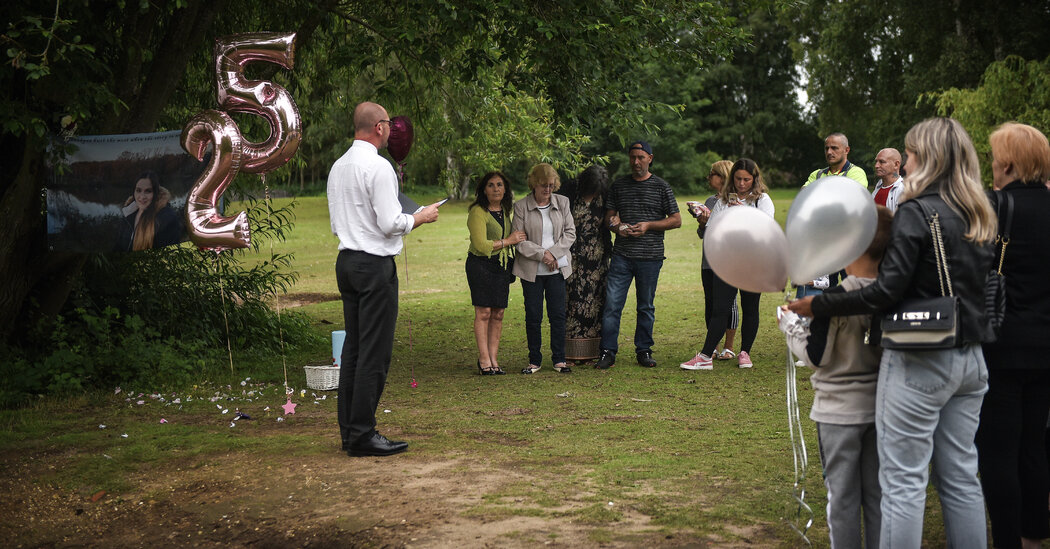 GRANTHAM, England — Daniela Espirito Santo died after waiting on hold for the police to answer her call for help.

It was the seventh time in a year that she had reported her boyfriend to the police, including for death threats and for trying to strangle her. Two of those calls came in the hours before her death. The first was in the morning, after her boyfriend pinned her on the bed and pressed his forearm against her throat.

“Is this it?” Ms. Espirito Santo, 23, had gasped, according to a police report. “Are you going to kill me this time?”

The police took him into custody but quickly released him. He returned to Ms. Espirito Santo’s apartment and soon afterward she called the police to report that he had assaulted her again. The dispatcher told her that her situation wasn’t urgent, because the boyfriend had left. He directed her to a nonemergency hotline and hung up after 94 seconds.

during the first month of Britain’s lockdown — more than triple the number in that month the previous year, and the highest figure in a decade. But it also illustrates another flaw in British authorities’ efforts to address violence against women: the repeated failure of prosecutors to punish abusers.

Initially charged with manslaughter, the boyfriend, Julio Jesus, then 30, was eventually sentenced to only 10 months behind bars. The Crown Prosecution Service, the national public prosecutor, dropped its manslaughter charge because of complicating medical opinions about the condition of Ms. Espirito Santo’s heart, and convicted him on two counts of serious assault. He was released before England’s coronavirus lockdowns had ended.

“There was a litany of failures where once again a woman’s voice hasn’t been listened to,” said Jess Phillips, a Labour lawmaker who speaks for the opposition on domestic violence policy. “This case shows nothing is changing, even though victims keep being promised it is.”

fewer than 2 percent of rape cases and 8 percent of domestic abuse cases reported to the police in England and Wales are prosecuted, even as complaints are rising.

The nation was shocked earlier this year when a police officer confessed to kidnapping, raping and murdering Sarah Everard, a 33-year-old marketing executive who was abducted while walking home in South London. The crime underscored the vulnerability felt by many British women and their concern that the police and prosecutors are failing to protect them.

Ms. Espirito Santo’s case fit that pattern. Her death in Grantham, a market town in the largely rural English county of Lincolnshire, received little outside attention and was regarded as a tragedy, not a scandal. An inquest into her death is in limbo. Lincolnshire Police — a small force covering a wide area with a sparse but often deprived population — refused an interview, as did the Crown Prosecution Service.

But an investigation by The New York Times lays bare the escalating abuse Ms. Espirito Santo reported, gives a rare insight into police failings and raises questions about the decision by prosecutors to drop the manslaughter charge. The Times has obtained a confidential 106-page report compiled by the Independent Office for Police Conduct, an official watchdog, into the Lincolnshire force’s handling of the case.

The report documents Ms. Espirito Santo’s ever more desperate interactions with the police, revealing a haphazard response as her situation worsened. It noted that some male officers felt sympathetic toward Mr. Jesus before releasing him on bail, including one who said his “biggest concern” was the boyfriend’s mental health.

government failings on domestic abuse at the start of Britain’s lockdowns, which left victims trapped at home with abusers and isolated from family and friends. The rules were especially constricting for people with serious health conditions, like Ms. Espirito Santo, who had to pause her job at a nursing home.

“Daniela’s case is a scandalous failing by the police to recognize someone who was at an increasing risk of domestic homicide,” Ms. Wistrich said. “But it is sadly illustrative of many cases we see.”

Lincolnshire Police refused to answer even written questions, citing concerns about prejudicing a future inquest. A spokesperson for the Crown Prosecution Service said it was determined to improve the handling of crimes against women and girls and to “narrow the gap” between “reports of these terrible offenses and cases reaching court.”

Ms. Espirito Santo’s story — pieced together by The Times through the confidential report, other documents and more than a dozen interviews — is of a yearlong cry for help that went unheard.

“Everything happened because the police didn’t help Daniela when she rang,” said Isabel Espirito Santo, Ms. Espirito Santo’s mother. “If the police had helped more, I think she could still be here.”

Ms. Espirito Santo was pregnant with her second child when she first reported Mr. Jesus to the police. It was May 19, 2019, and she told officers that he had threatened to kill her, that he was violent and controlling and “excessively jealous.”

Fifteen hours before she died, Ms. Espirito Santo made her penultimate call to the police. It was 9:48 a.m. She told the operator that Mr. Jesus had thrown her on the bed and grabbed her neck, leaving a mark. He had left, but not before pinning her with the front door and threatening to kill her. When two officers arrived, she agreed to support a prosecution.

She told the officers that she had “lost count” of how often Mr. Jesus had assaulted her, often squeezing her neck so tightly that she struggled to breathe. She said that he sometimes slammed her against furniture, that he had once broken her finger, and that she was afraid he might kill her.

Two hours later, Mr. Jesus was arrested, crying as he was taken into custody. Later that afternoon, Ms. Espirito Santo called Ms. Price-Wallace and said the police had told her that Mr. Jesus would be released pending a charging decision.

can qualify as manslaughter if it leads to a death, even if the killing was unintentional. Those found guilty can face up to life in prison.

But prosecutors decided to drop the charge after a cardiologist hired by Mr. Jesus’s lawyers argued that while the assault could have caused the heart failure, so could a verbal argument.

Prosecutors concluded that they could no longer meet the tests for a manslaughter conviction by proving that the heart failure was caused by an assault, a spokesperson for the Crown Prosecution Service said.

That was despite the fact Ms. Espirito Santo had reported an assault, not an argument, minutes before her death; despite Mr. Jesus’s admission that he had assaulted her that morning; and despite her history of domestic violence complaints.

The official watchdog report on Lincolnshire Police found that the “decision making of its officers may have influenced the circumstances of the events” around Ms. Espirito Santo’s death, if not caused it, and blamed officers for a “lack of detailed consideration of Mr. Jesus’s situation” on release.

Yet the report did not recommend disciplinary action and mentioned only one “potential learning recommendation” — for a formal policy around sending calls to the nonemergency number, a change that has been introduced. In a statement to The Times, the watchdog agency said it had also made “learning” recommendations for two officers on how they interacted with Mr. Jesus.

Domestic Abuse Act. It was a response to growing outrage over failures in abuse cases. For the first time, the law established that nonfatal strangulation — which Ms. Espirito Santo repeatedly reported — is a criminal offense, bringing up to five years in prison.

Since such strangulation usually does not leave marks, the police often fail to recognize it as a serious crime. Prosecutors, in turn, do not bring more serious charges. Advocates for abuse victims have welcomed the law but say it will change little unless police and public prosecutors are educated in using it, and given proper resources.

On July 5, on what would have been Ms. Espirito Santo’s 25th birthday, her mother and two dozen others scattered her ashes at her favorite spot, a lake in the Lincolnshire countryside. Her grandmother gave a reading in Portuguese by the water’s edge. Her mother wept.

“I didn’t get justice in court,” she said. “But I believe in justice of the gods.”

The union movement that kicked off across the country more than a year ago has continued its momentum in 2022, with workers in warehouses, coffee … END_OF_DOCUMENT_TOKEN_TO_BE_REPLACED

Keep up! Reality TV star Kim Kardashian has splurged on a cliffside mansion in Malibu, CA, that was once owned by Cindy Crawford and Rande … END_OF_DOCUMENT_TOKEN_TO_BE_REPLACED