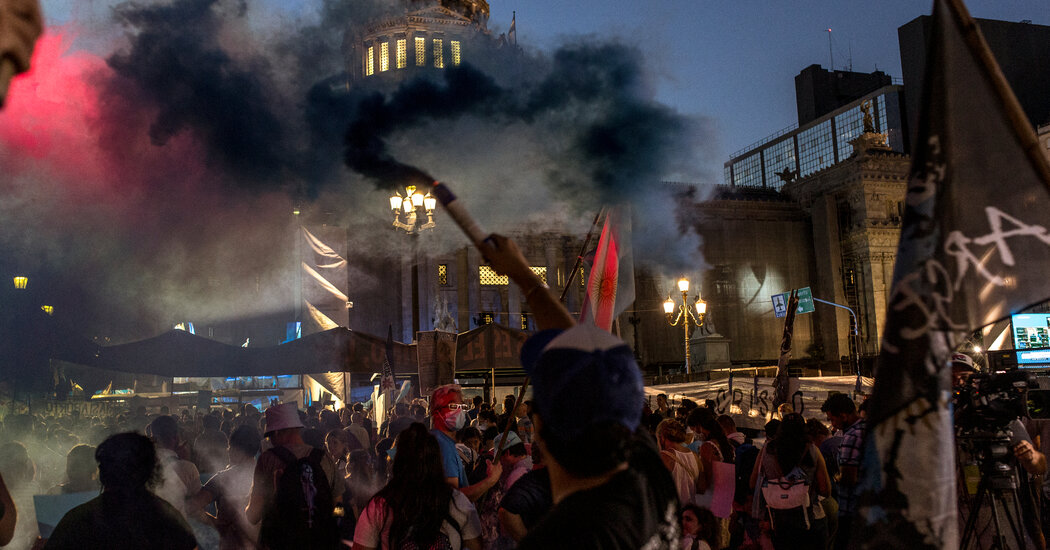 BUENOS AIRES — For the first time in more than a century, women in Argentina can legally get an abortion, but that landmark shift in law may do them little good at hospitals like the one in northern Jujuy Province where all but one obstetrician have a simple response: No.

Abortion opponents are reeling after a measure legalizing the procedure was signed into law in December, but they have hardly given up. They have filed lawsuits arguing that the new law is unconstitutional. And they have made sure doctors know that they can refuse to terminate pregnancies, a message that is being embraced by many in rural areas.

“The law is already a reality, but that doesn’t mean we have to stay still,” said Dr. Gloria Abán, a general practitioner and abortion opponent who travels the remote Calchaquí Valleys of Salta Province to see patients. “We must be proactive.”

In neighboring Jujuy, 29 of the 30 obstetricians at the Hector Quintana Maternity and Children’s hospital have declared themselves conscientious objectors, as the law allows. So have all but a handful of the 120 gynecologists in the province, said Dr. Rubén Véliz, head of the obstetrics department at Hector Quintana.

But even officials in President Alberto Fernández’s administration, which introduced the bill, acknowledge that hard work remains to ensure that women are able to gain access to the procedure. “Activists will have to play an key role,” Elizabeth Gómez Alcorta, Argentina’s minister of women, gender and diversity, said in an interview.

denied an abortion. The baby was delivered in a C-section but died shortly thereafter. The case inflamed passions across the country.

Officials say the opposition by doctors will have limited impact because the vast majority of abortions within the first 14 weeks of pregnancy are carried out with pills and do not require a medical procedure. Even when a procedure is needed, they said, there will be ways to work around roadblocks.

“The practice is guaranteed, because if a certain hospital does not have professionals who are not conscientious objectors we will transfer the patient,” said Dr. Claudia Castro, who leads the women’s health department in the maternity and infancy division of Jujuy’s Health Ministry.

In rural areas, though, it may be difficult for women to ask for help in the first place.

“It’s one of many popular beliefs that are in the collective imagination,” said Ms. Lerma, who belongs to an abortion rights coalition of health care providers.

Recently, Ms. Lerma said, a woman in her early 20s came to see her and said she was terrified about the prospect of having an abortion because a gynecologist had told her it would cause cancer.

more than 1,500 prosecutions directly related to abortion and 37 for “obstetric events,” which typically refers to miscarriages.

The first category may be easier to handle. Since abortion is now allowed, any pending cases may be thrown out, though “this won’t be so automatic,” said Diego Morales, a lawyer with the legal center.

a book published last year that brought to light how common such prosecutions had become. Sometimes, she said, the women said they had not even known they were pregnant — “but nobody believed them.”

One woman, Rosalía Reyes, who was placed under house arrest after being sentenced to eight years. She says she suffered a miscarriage when she was seven months pregnant.

As a mother of four, the judges reasoned, Ms. Reyes should have known how to cut the umbilical cord, even though she lost so much blood she fainted, said her lawyer, Fabiana Vannini.

Ms. Vannini hopes she may now have a way to reopen the case. The new law, she argues, does more than just legalize abortion.

“It also changes the paradigm of what is a woman, and who has control over her body, her uterus,” the lawyer said.

Phil Shell loves the Bay Area and its real estate market. He’s been building his career here as an agent over the past eight years, but even he hasn’t … END_OF_DOCUMENT_TOKEN_TO_BE_REPLACED

DS4 Cross DS The Plug-in hybrid seems the perfect answer to the electric car dilemma; battery power for all your local needs and a traditional motor … END_OF_DOCUMENT_TOKEN_TO_BE_REPLACED