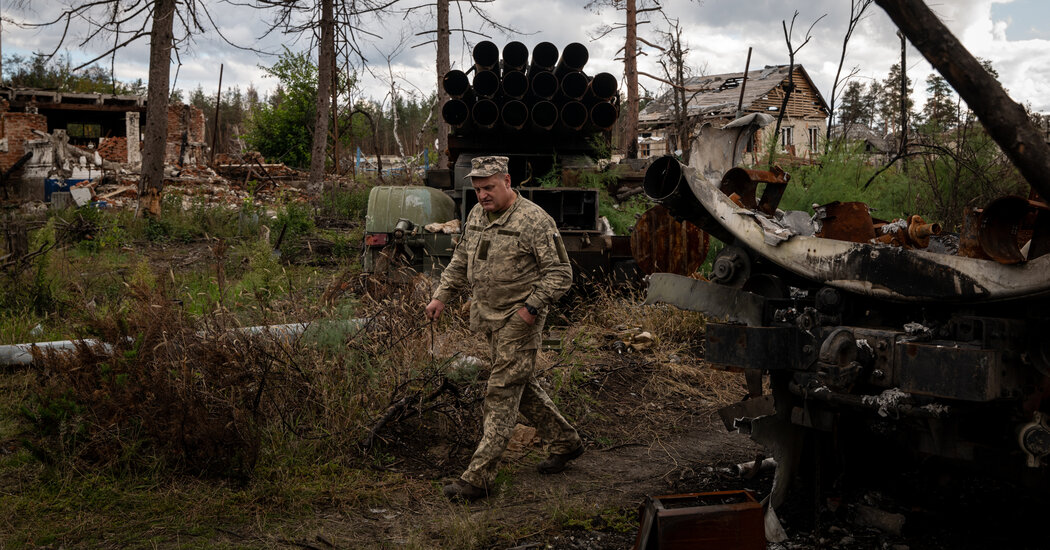 Ukraine, fresh from a string of victories in the northeast, is now poised at the gateway to the eastern Donbas region and may have its best opportunity yet to dislodge Russian forces that expanded their control over the area after brutal combat this summer. Lysychansk, which only three months ago fell to the Russians in a demoralizing setback for Kyiv, could be the next major city in Ukraine’s sights.

That a battle to retake Lysychansk is even conceivable shows just how much the tables have turned in the east in the few weeks since Ukraine launched a surprise counteroffensive in the northeastern Kharkiv region. The relative speed of its victories is a marked contrast to Russia’s grinding assault over the summer in Donbas.

“The offensive movement of our army and all our defenders continued,” President Volodymyr Zelensky said in a bullish speech overnight, in which he said that 450 settlements in Kharkiv had been recaptured. “There are new liberated settlements in several regions.”

“Fierce fighting continues in many areas of the front,” he said.

Over the weekend, Ukraine reclaimed the town of Lyman, a strategic rail hub in the north of Donetsk, one of two territories that make up Donbas, and has continued to press east toward Lysychansk.

To seize Lysychansk and its sister city of Sievierodonetsk — both of which lie in northern Luhansk, the other territory that makes up Donbas — Russia pounded Ukrainian forces with artillery for weeks before street-by-street fighting eventually forced Ukraine’s withdrawal. Before Lyman fell, Ukrainian soldiers gradually encircled the town, and it fell last week after just days of intense combat.

Analysts point to Ukraine’s success in cutting off Russian supply routes as key to its momentum. As Russia was pushed out of Kharkiv last month, it lost control of its rail hub in the city of Izium, making it much harder for Moscow to resupply its forces farther south in Donbas and leaving them vulnerable.

Russia announced a surprise military call-up last month, and the country’s defense minister, Sergei K. Shoigu, said on Telegram on Tuesday that Moscow had drafted more than 200,000 troops of a planned 300,000. Although they have had little time for training, new troops from the recent mobilization have begun arriving in Ukraine, the Defense Ministry said on Monday.

Ukrainian soldiers have encountered hungry, poorly outfitted Russian troops, some with little weaponry to defend themselves.

Russia’s military is likely to be faced with a decision about whether to shift resources from other parts of the front to slow Ukraine’s advance or risk losing more ground in Donbas. Some of the nearest Russian reinforcements are roughly 25 miles southeast of Lyman, around the Ukrainian-held city of Bakhmut. The Wagner Group, an infamous paramilitary unit that reports directly to the Kremlin, has battered the Ukrainian defenders there but failed to seize the city.

But the question remains how long Ukrainian momentum can last. In recent days, some Ukrainian soldiers in Kharkiv Province have spoken of exhaustion after weeks of nonstop fighting.

Ben Barry, a senior fellow for land warfare at the International Institute for Strategic Studies in London, said that the advance would most likely reach a “culminating point” after which the offensive would be difficult to sustain because troops would need to be rotated and resupplied.

Ukraine’s gains have not eased the danger to civilians, as fighting continued to produce casualties. A convoy of people fleeing Svatove, in Luhansk, was attacked in recent days and 24 people, including 13 children, were killed, the Ukrainian authorities said. And on Monday, Russian shellfire at a hospital in the Kupiansk district of the Kharkiv region killed a doctor and wounded two nurses, according to the head of its military administration, Oleh Syniehubov.

Russia’s battlefield losses have come even as Moscow claims that four Ukrainian regions where fierce fighting is continuing are now part of Russia, a move that has been met with widespread international derision.

Tass, a Russian state news agency, reported on Tuesday that the country’s upper house of Parliament, the Federation Council, had approved a law to annex Donetsk and Luhansk, as well as two provinces in southern Ukraine, Kherson and Zaporizhzhia.

President Vladimir V. Putin of Russia is likely to sign the law, which follows referendums in the provinces denounced as a sham by Ukraine and its Western partners.

Mr. Zelensky said on Tuesday that, given “Russia’s attempt to annex territories,” he had approved a decision of the country’s security council on the “impossibility of holding negotiations” with Mr. Putin.

AUSTIN, Texas--(BUSINESS WIRE)--As the first multifamily management company to be recognized in the Public Relations and Marketing Excellence Awards, … END_OF_DOCUMENT_TOKEN_TO_BE_REPLACED

There have been whispers of cooling housing and rental prices in the San Francisco Bay Area, but that hasn't yet translated into practical, noticeable … END_OF_DOCUMENT_TOKEN_TO_BE_REPLACED

Cars pass in Independence Square at twilight in Kyiv, Ukraine, Monday, Oct. 31, 2022. Rolling ... [+] blackouts are increasing across Ukraine as the … END_OF_DOCUMENT_TOKEN_TO_BE_REPLACED