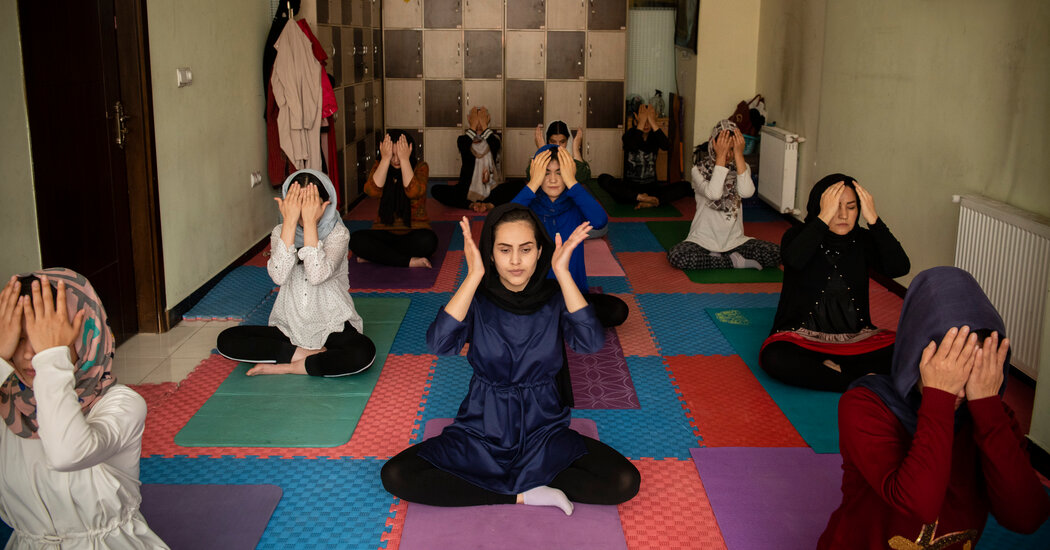 KABUL, Afghanistan — Farzana Ahmadi watched as a neighbor in her village in northern Afghanistan was flogged by Taliban fighters last month. The crime: Her face was uncovered.

“Every woman should cover their eyes,” Ms. Ahmadi recalled one Taliban member saying. People silently watched as the beating dragged on.

Fear — even more potent than in years past — is gripping Afghans now that U.S. and NATO forces will depart the country in the coming months. They will leave behind a publicly triumphant Taliban, who many expect will seize more territory and reinstitute many of the same oppressive rules they enforced under their regime in the 1990s.

The New York Times spoke to many Afghan women — members of civil society, politicians, journalists and others — about what comes next in their country, and they all said the same thing: Whatever happens will not bode well for them.

military and police, held political office, become internationally recognized singers, competed in the Olympics and on robotics teams, climbed mountains and more — all things that were nearly impossible at the turn of the century.

President Biden made his final decision to pull out all U.S. troops by September, some lawmakers and military officials argued that preserving women’s rights was one reason to keep American forces there.

more than 1,000 schools have closed in recent years.

“It was my dream to work in a government office,” said Ms. Ahmadi, 27, who graduated from Kunduz University two years ago before moving to a Taliban-controlled village with her husband. “But I will take my dream to the grave.”

If there is one thing that decades of war have taught Afghans, it is that conflict was never a good way to achieve human or women’s rights. Since the Soviets invaded Afghanistan in 1979, war has continuously fueled more war, eventually undermining any humanitarian achievements.

Under the U.S. occupation, education opportunities, cultural shifts, employment and health care have benefited some and barely affected others, especially in rural areas. In those places, some of the war’s most brutal chapters played out with many civilians dead and livelihoods devastated.

Often, women’s opinions are unclear in these parts, where roughly three-quarters of Afghanistan’s 34 million people live, and are often unreachable because of geographical, technological and cultural constraints.

Still, the Taliban’s harshly restrictive religious governing structure virtually ensures that the oppression of women is baked into whatever iteration of governance they bring.

The Taliban’s idea of justice for women was solidified for Ms. Ahmadi when she saw the insurgents beat the unveiled woman in front of her in Kunduz Province.

For many other Afghan women, the government’s judicial system has been punishment of a different kind.

Farzana Alizada believes that her sister, Maryam, was murdered by her abusive husband. But a police investigation of any sort took months to start, thwarted by absent prosecutors and corruption, she said. Ms. Alizada’s brother-in-law even pressured her to drop the charges by accusing her of stealing. The police asked her why she was pushing the case if her sister was dead.

Domestic violence remains an enduring problem in Afghanistan. About 87 percent of Afghan women and girls experience domestic abuse in their lifetimes, according to a Human Rights Watch report.

“I lost all the hope I have in this government. In some cases, maybe the Taliban is better than this system.” Ms. Alizada said. “No one is on my side.”

Ms. Alizada’s sentiments were similarly portrayed in Doha, Qatar, at the peace talks between the Afghan government and the Taliban. Despite months of negotiations, there has been little progress, especially when it comes to discussing women’s rights, which neither side has made a priority.

At a separate peace conference held in Moscow in March between the Afghan government, political power brokers and the Taliban, only one woman, Habiba Sarabi, was on the 12-member delegation sent by the Afghan government. And only four are a part of the 21-person team in Doha.

“Moscow — and Doha, as well, with its small number of women representatives — laid bare the thin veneer of support for genuine equality and the so-called post-2001 gains when it comes to who will decide the country’s future,” said Patricia Gossman, the associate Asia director for Human Rights Watch.

But one of the gains that is almost indisputable has been Afghanistan’s access to the internet and the news media. Cellphone coverage extends across much of the country, meaning that Afghan women and girls have more space to learn and connect outside their familial bubbles and villages. The Afghan news media, too, has blossomed after large investments from foreign governments and investors, and many women have become nationally known journalists and celebrities.

But even their futures are uncertain.

Lina Shirzad is the acting managing director of a small radio station in Badakhshan, in Afghanistan’s restive north. She employs 15 women and fears, given the growing insecurity, that they will lose their jobs. Even some of the larger national outlets are looking to relocate employees or move some operations outside the country.

“With the withdrawal of foreign forces in the next few months, these women that are the breadwinners for their family will be unemployed,” Ms. Shirzad said. “Will their values and achievements be maintained or not?”

Good morning and happy Mother’s Day. (Hi, mom!) Here’s the news you need to know for the week ahead in business and tech. — Charlotte … END_OF_DOCUMENT_TOKEN_TO_BE_REPLACED

HANOVER, N.H. — Sirey Zhang, a first-year student at Dartmouth’s Geisel School of Medicine, was on spring break in March when he received an email … END_OF_DOCUMENT_TOKEN_TO_BE_REPLACED

VLACHOVICE-VRBETICE, Czech Republic — For nearly a century, local residents have wondered at the strange comings and goings at a sealed-off camp … END_OF_DOCUMENT_TOKEN_TO_BE_REPLACED