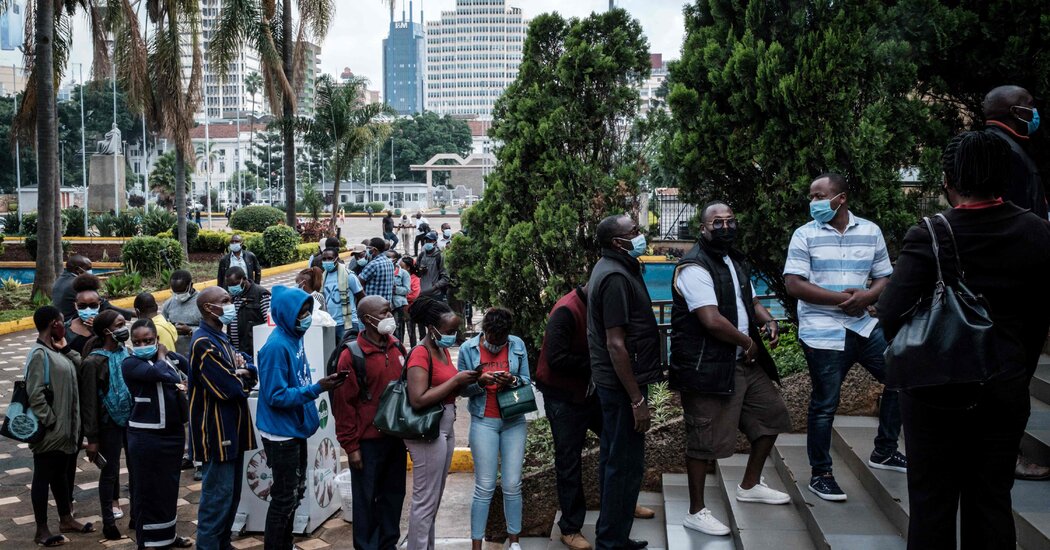 NAIROBI, Kenya — The rapidly escalating coronavirus crisis in India is not only forcing hospitals to ration oxygen and sending families scrambling to find open beds for infected loved ones. It is also wreaking havoc on the global vaccination effort.

Nowhere is that more evident than in Africa.

Most nations were relying on vaccines produced by the Serum Institute factory in India. But the Indian government’s decision to restrict exports of doses as it deals with its own outbreak means that Africa’s already slow vaccination campaign could soon come to a near standstill.

Before India suspended exports, more than 70 nations received vaccines it manufactured, totaling more than 60 million doses. Many went to low- and middle-income countries through the Covax program, the global initiative aimed at ensuring equitable access to vaccines.

So far, Covax has delivered 43.4 million doses to 119 countries, but this represents only about 2 percent of the two billion doses it hopes to deliver this year, according to Andrea Taylor, an assistant director at the Duke Global Health Innovation Center.

according to the Africa Centers for Disease Control and Prevention.

Just six million doses have been administered in all of sub-Saharan Africa — fewer than in many individual U.S. states. The prospect of reduced supplies further complicates what was, for many African nations, an already daunting logistical challenge.

Many African governments prioritized administering first doses to more of their populations in the expectation that more doses would soon arrive. Now they are struggling with what to do if there are not enough vaccine supplies to give the full two-dose regimen that offers maximum prevention.

Countries like Rwanda and Ghana, which were among the first to receive doses from Covax, are about to exhaust their initial supplies. In Botswana, inoculations were temporarily halted in some areas this month after the allotted doses were finished. And Kenya, which has almost run out of its initial one million doses, said this week that it would seek to acquire Johnson & Johnson and Pfizer vaccines to continue its inoculation campaign. On Saturday, because of the delays, the country lengthened the timing between the administration of the first and second dose to 12 weeks from eight.

have run through more than two-thirds of their supplies, said Dr. Matshidiso Moeti, the World Health Organization’s regional director for Africa.

The African Union’s vaccination task force has secured funding to purchase up to 400 million Johnson & Johnson vaccines for member states — but those doses won’t start arriving until fall.

“More than one billion Africans remain on the margins of this historic march to end this pandemic,” Dr. Moeti said.

A spokesman for Gavi, which helps lead the Covax program, said in an email that it was in close contact with the Indian government about restarting vaccine shipments, but that “in terms of timing of next deliveries, we’re not able to confirm at this stage.”

Even as the United States sits on tens of millions of doses of the AstraZeneca vaccine — the most affordable vaccine in widespread use — African nations are turning to Russia and China for doses made in those countries, despite concerns about lack of clinical data on their efficacy and safety.

Amid the delays, some African countries are facing new and possibly deadlier waves of the pandemic. The Africa Centers for Disease Control and Prevention reported 2,155 deaths from the virus in the past week, up from 1,866 the week before.

In Nairobi, the capital of Kenya and home to one of the continent’s better health care systems, officials have warned of a scarcity of intensive-care beds and oxygen supplies. Last month, the Kenyan government ordered a new lockdown that has prompted anger over the restrictions’ economic impact.

Whether you optimistically hope that mortgage rates will decline or are resigned that rates will stay elevated above the historic lows of 2021, you … END_OF_DOCUMENT_TOKEN_TO_BE_REPLACED

A resident of Nikopol, Ukraine, in her backyard last month, with smoke rising from an area on the opposite bank of the Dnipro River. Credit...David … END_OF_DOCUMENT_TOKEN_TO_BE_REPLACED