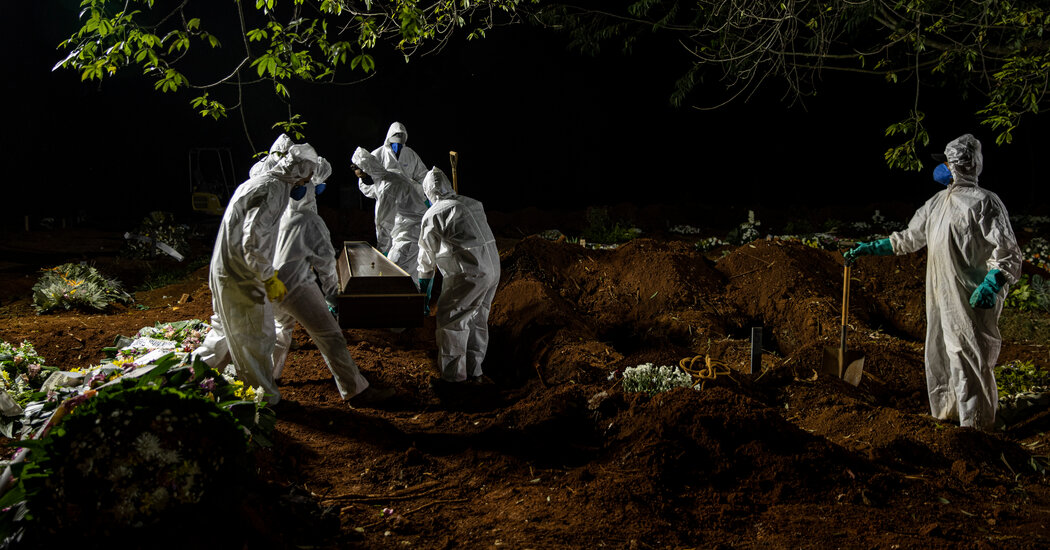 If the world doesn’t stop the region’s surging caseload, it could cost us all that we’ve done to fight the pandemic, said one health official.

By Julie Turkewitz and Mitra Taj

BOGOTÁ, Colombia — In the capital of Colombia, Bogotá, the mayor is warning residents to brace for “the worst two weeks of our lives.”

Uruguay, once lauded as a model for keeping the coronavirus under control, now has one of the highest death rates in the world, while the grim daily tallies of the dead have hit records in Argentina, Brazil, Colombia and Peru in recent days.

Even Venezuela, where the authoritarian government is notorious for hiding health statistics and any suggestion of disarray, says that coronavirus deaths are up 86 percent since January.

As vaccinations mount in some of the world’s wealthiest countries and people cautiously envision life after the pandemic, the crisis in Latin America — and in South America in particular — is taking an alarming turn for the worse, potentially threatening the progress made well beyond its borders.

abandoned on sidewalks and new burial grounds cut into thick forest. Yet even after a year of incalculable loss, it is still one of the most troubling global hot spots, with a recent surge in many countries that is even more deadly than before.

longest schools closures and largest economic contractions in the world.

Inequality, a longstanding scourge that had been easing before the pandemic, is widening once again, and millions have been tossed back into the precarious positions they thought they had escaped during a relative boom. Many are venting their anger in the streets, defying official pleas to stay home.

“They’ve taken so much from us that we’ve even lost our fear,” read a sign held by Brissa Rodríguez, 14, at a protest with thousands of others in Bogotá on Wednesday.

recent essay. “I want to think that the worst is over. But that turns out, I believe, to be counter-evident.”

devastated by the virus in mid-2020. But the second wave there was worse than the first.

While the data is far from conclusive, initial studies indicate that P.1 is more transmissible than the initial virus, and is associated with a higher death rate among younger patients and patients without pre-existing conditions. It can also reinfect people who have already had Covid, though it’s unclear how often that occurs.

37 countries, but appears to have spread most thoroughly through South America, said William Hanage, an epidemiologist at Harvard University.

Across the region, doctors say that the patients coming into hospitals are now far younger and far sicker than before. They’re also more likely to have had the virus already.

In Peru, the National Health Institute documented 782 cases of likely reinfection in the first three months of 2021 alone, a surge from last year. Dr. Lely Solari, an infectious disease doctor with the institute, called this “a very significant underestimate.”

Official daily death tolls have exceeded previous records in recent days in most of South America’s biggest countries. Yet scientists say that the worst is yet to come.

Our World in Data, a project at the University of Oxford. Several of its neighbors have achieved half that, or less.

The actual death toll is far higher, because many of the dead have not been included in the official count of coronavirus patients.

government study in the capital, Lima, found that 40 percent of residents had coronavirus antibodies. Officials said the population had reached such a high level of immunity that a second wave might not be so bad. The government opted not to impose a lockdown during Christmas and New Year’s celebrations.

jumped the line to get vaccinated first. More recently, multiple government agencies have begun investigating whether some health workers have asked for bribes in exchange for access to scarce hospital beds.

“It was that or let her die,” said Dessiré Nalvarte, 29, a lawyer who said she helped pay about $265 to a man who claimed to be the head of the intensive care unit at a hospital in order to get treatment for a family friend who had become sick.

The crisis has plunged nations like Peru into grief, ripping at the social fabric. This month, thousands of poor and newly poor Peruvians began to occupy empty swaths of land in southern Lima, with many saying that they were doing so because they had lost their livelihoods amid the pandemic.

Rafael Córdova, 50, a father of three, sat on a square drawn in the sand that marked his claim to land overlooking the Pan-American Highway and the Pacific Coast.

Before the pandemic, he explained, he was supervisor in the human resources department of a local municipality, and had a grip — or so he thought — on stability.

Then, in May, he became sick with Covid and was fired. He believes his bosses let him go because they feared that he would sicken others, or that his family would blame them if he died.

He now struggles to pay for minutes on the one family phone so that his children can do class work. Meals are small. Debts are mounting. “Today I went to the market and bought a bag of fish bones and made soup,” he said.

He says he has lost an aunt, a sister-in-law and a cousin to Covid, as well as friends. In June, his wife, who had also had Covid, gave birth to twins prematurely. One daughter died days after birth, he said, and the second died about a month later. He had no money for a proper burial.

“I left the hospital with my daughter in a black plastic bag and got in a taxi and went to the cemetery,” he said. “There was no Mass, no wake. No flowers. Nothing.”

When he heard about the occupation, he said he was three months behind on rent and feared eviction. So he made a run for the hill, pitching a tent that became his new home.

A week later, the police arrived, set off tear gas — and booted him and thousands of others from their camp.

MIAMI--(BUSINESS WIRE)--Intelli Smart Homes, the leading smart home technology company, has been recognized as one of America’s fastest-growing … END_OF_DOCUMENT_TOKEN_TO_BE_REPLACED

Customers outside a Walmart store in Torrance, California, US, on Sunday, May 15, 2022. Walmart Inc. is scheduled to release earnings figures on May … END_OF_DOCUMENT_TOKEN_TO_BE_REPLACED

The past few years have been brutal on homebuyers' budgets. Would-be buyers have been priced out of some of the most desirable neighborhoods thanks to … END_OF_DOCUMENT_TOKEN_TO_BE_REPLACED